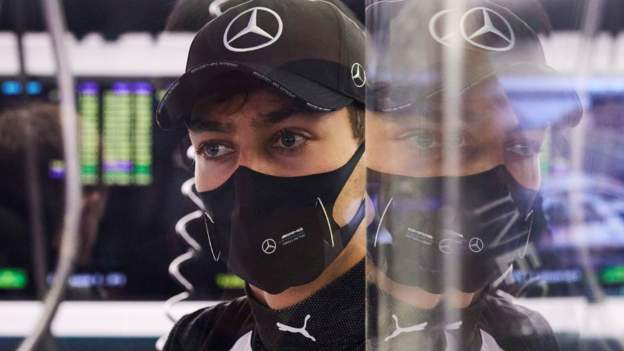 Mercedes team boss Toto Wolff said he had been “impressed but not surprised” by the accomplished performance George Russell has produced so far as he stood in for Lewis Hamilton at the Sakhir Grand Prix.

The 22-year-old Briton came within 0.026 seconds of taking pole position on his debut for Mercedes, and in so doing confirmed a status he already enjoyed in many minds in Formula 1 as a star of the future.

And befitting a driver of such obvious talent, Russell admitted to being “gutted” at being so near and yet so far from beating team-mate Valtteri Bottas to pole position around Bahrain’s short outer circuit.

“In some ways being so close makes it really frustrating,” Russell said, “but if you had told me four days ago I would be P2 this weekend I would think you were pulling my pants down.”

It has been a whirlwind few days for Russell. Hamilton awoke with Covid symptoms on Monday morning after winning the Bahrain Grand Prix. He had a positive test and a re-test confirmed the result.

At 2am on Tuesday, Wolff called Russell to tell him he wanted him in the car. By that evening, it was pretty much sorted out, and since Wednesday Russell has been working flat out with the team.

Friday practice had gone well. Russell topped both sessions, even if it was obvious Bottas had a small pace advantage but had just not shown it on the times as a result of a messy day.

But Russell described his final practice session as “woeful”, pushing too hard, making mistakes. He was only seventh fastest. It knocked him back, and Wolff wanted to settle him down before the session that really mattered.

The two sat down for ‘lunch’ with chief strategist James Vowles before the night time qualifying session, Wolff’s idea being to relieve some of the weight he believed his protege was feeling.

Wolff told Russell that the team’s expectations were that he would be in the top four or five places, and that lap times would be tight because of the short lap.

“It was important to say what our expectations were,” Wolff said. “It released some of the pressure he was putting on himself.”

It worked a treat. Russell was 0.256secs down on Bottas in the first qualifying session. But after that it was neck and neck – 0.16secs between them in the second; and then another tiny margin in the top 10 shootout.

Russell knew pole had been within his reach, and what really let him down was the first corner, where he said he had been “struggling all weekend”.

“Valtteri has been taking loads of lap time out of me [there],” Russell said. “But after that, from Turn Four onwards, I felt great and the car was on rails and a real joy to drive. Turn One was really letting me down and I am sure I am going to look at the data and it is going to frustrate me.”

It was all about confidence on the brakes from a very high-speed approach in a car he had never driven before Friday morning. Indeed, Russell was only eighth fastest through the first sector in qualifying, and second quickest in the next two, behind Bottas in the second sector and Red Bull’s Max Verstappen in the third. Over sectors two and three, Bottas’ advantage was just 0.004secs.

Wolff has backed Russell’s career since 2017, has always believed he had speed, and said that Russell had taken a “really considered approach” to his first weekend with Mercedes.

He had done a shade more than 6,500km of testing for the world champions but had not turned a wheel in the 2020 car, even in the simulator, before taking it out on track on Friday morning.

The team know Russell well, and vice versa, but Wolff said: “What is most impressive is the sheer driving. Everything else around was as expected. But the driving was impressive.”

And this despite a car into which he does not fit well at all. At 6ft 1in, Russell is five inches taller than Hamilton. He is wearing boots a size too small to allow his size 11 feet to operate the pedals. There was no time to mould him a new seat, so he is using one from a year ago. He is suffering for all this.

“Comfort-wise it isn’t perfect,” he said. “I’m very bruised and sore. It will be a fatiguing race. I had ice on the shoulders last night to reduce swelling, and my knees and toes [are sore].”

Wolff is taking the same approach to expectations for the race as he did for qualifying, pointing out that Russell is starting on the dirty side of the grid, which has less grip, and from which Bottas lost a number of places at the start of last week’s race in Bahrain.

“George has no pressure at all,” Wolff said. “He has nothing to lose and Verstappen is not going to be happy that there is a new kid on the block standing in front of him.

“George is on the worst line, as we saw last weekend. The cockpit is too small for him. The clutch paddles are too small for his hands and fingers. So I have the same expectations as I had for qualifying. He has confirmed what we thought of him.”

Inevitably, the uninformed will look at Russell’s asserted performance and say that it proves Hamilton is only winning so much because he is in the best car. But it would be a misunderstanding to think that this reflects badly on Hamilton. That is looking at the picture the wrong way around; the only reflection is on Russell’s quality and potential.

Asked whether Mercedes needed Hamilton, who is yet to agree a new contract for 2021 and beyond, Verstappen said: “Of course you do, because he will make the difference in the most crucial moments. That’s why he is a seven-time world champion.”

Russell himself said: “Guys like Lewis make the difference when the pressure is on in the key moments. That’s what Lewis has done so well over al then years. He’s a superstar of course and if you are Toto or anyone else you want him in your car.”

To those inside F1, it was obvious Russell was a top talent from the moment he came into the sport.

“I was always going to put George very close to Valtteri in my predictions, and it just shows what F1 is missing by having the cars two seconds apart.

“It’s a shame that a guy who is [normally] fighting in P15, you put him in a car and he is just off pole. F1 could create an incredible show if you could level the field a bit more.

“It is missing out on getting the grid more compressed and having the driver make more of a difference.”

Not an easy time for Hamilton

In all this, spare a thought for Hamilton, isolated in his hotel room in Bahrain until next Wednesday following his coronavirus diagnosis, “not feeling great,” as Wolff put it, watching (or perhaps not) someone else in his car, and not knowing whether he will recover and test negative in time to race in the finale in Abu Dhabi next weekend.

“I spoke last to him a couple of days ago,” Wolff said, “probably Thursday. We have been texting since then every single day. I tried to leave him in peace because Covid-19 is no fun. I think he is [as] OK as all of us would be in a foreign country with Covid-19.

“Lewis is a very competitive person and a racing driver wants to be in his car and not see anyone else driving it.

“I don’t know how he will organise his weekend but it not a nice experience for any professional sportsperson. But it wasn’t a mistake he’s made. He didn’t do anything wrong. These things happen. The championship is won but total understanding for [him] maybe not particularly enjoying the experience.”