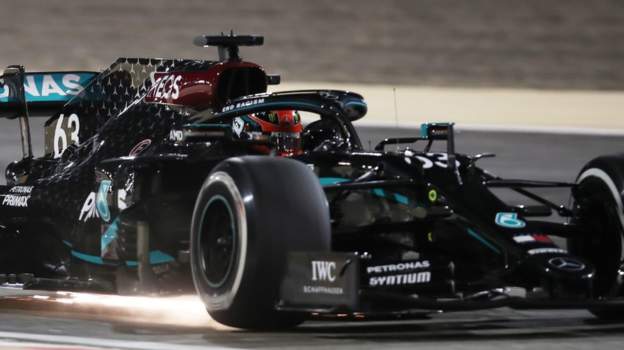 Mercedes’ George Russell completed a clean sweep of Friday’s two practice sessions at the Sakhir Grand Prix as he subbed for Lewis Hamilton.

The Finn set the fastest lap of the session, just under 0.2secs quicker than Russell, but had the time deleted for exceeding track limits.

It was a highly accomplished performance from Russell, 22, in a car he had not driven before after being drafted in following Hamilton testing positive for coronavirus.

Russell described the Sakhir circuit – a shortened version of the traditional configuration used for last week’s Bahrain Grand Prix – as “tricky” and “not easy”.

“I’m learning so much every single lap. The lap times are little but deceiving and aren’t a true representation of pace. FP2 was not a great session for me, I struggled especially on the high fuel and that is going to be key on Sunday, still got a lot of work to do to be comfortable in the car and with the set-up.”

At 6ft 1in, Russell is five inches (14cm) taller than Hamilton and revealed on Thursday it had been a “tight fit” getting him into the car. He has also been required to wear one size smaller driving boots.

“I am pretty battered and bruised,” he said. “We have gone through what needs to change and it’s not the work of a moment, changing the seat here and there. We are working hard to improve that for Sunday.

“I am doing my best to be as prepared as possible but jumping in the car with two days’ notice is tricky.

“Just because I am quickest today does not mean I am going to be there tomorrow. I am probably a good tenth and a half behind Valtteri in the low fuel and Verstappen was incredibly quick in the long runs.”

Bottas appeared to have a little pace in hand over the Briton but was visibly more on edge, especially through the bumpy middle sector of the new, shorter layout of Bahrain’s F1 track that is being used for the first time this weekend.

It was in that sector that Bottas made his error, sliding slightly wide through Turn Eight and having his time ruled out.

Russell also set the pace in the first session, when Bottas damaged his car early on running over a kerb, also at Turn Eight.

On race pace on the soft tyre, Russell appeared to be suffering greater tyre degradation but the two were closely matched on the hard tyre which will likely be favoured in the race.

“It was quite a tricky day,” said Bottas. “In the first session, in the first run, I broke the floor going over the kerbs in Turn Eight.

“Practice two felt OK, I didn’t get any laps on the soft tyre, had one half-decent lap but it got deleted for track limits. The long runs were pretty consistent but Red Bull on the medium tyre looked pretty quick.”

Ferrari had a desperate session. Sebastian Vettel had two spins and managed only 16th fastest time, while Charles Leclerc had a driveshaft fail after going over a kerb on the exit of Turn Eight early in the session and could not get out again. He was last without setting a time.

Fittipaldi, the grandson of two-time world champion Emerson Fittipaldi who is deputising for Romain Grosjean following the Frenchman’s fiery crash at this track last Sunday, was just over three tenths slower than Haas team-mate Kevin Magnussen.

British-Korean driver Aitken has been handed his chance at Williams following Russell’s switch to Mercedes. The 25-year-old finished just under half a second slower than team-mate Nicholas Latifi.