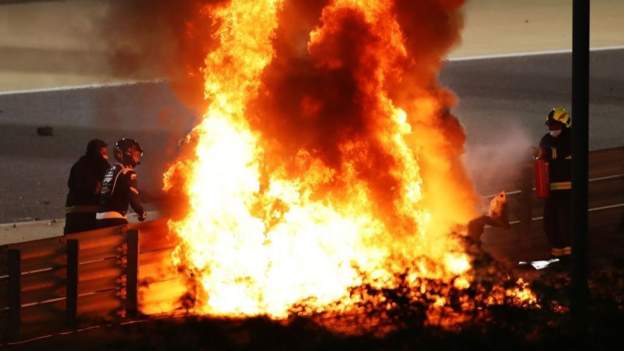 The FIA said it would conduct a “detailed” analysis of the incident, in which Frenchman Grosjean’s car penetrated the barriers.

It said it would be six to eight weeks before the findings were published.

FIA safety director Adam Baker said the data “allows us to accurately determine every element of what occurred”.

Baker added the “work has already begun” and the aim was “to find out exactly what happened before proposing potential improvements”.

Grosjean suffered burns to his hands and extensive bruising but was otherwise unhurt in an accident that had an impact speed of 137mph and in which he was subjected to a force of 53G.

On Wednesday, Grosjean spoke to French media about the accident, saying he believed the halo head-protection device introduced into F1 in 2018 had saved his life.

The halo was adopted following the death of Frenchman Jules Bianchi, who suffered severe head injuries in an accident in the 2014 Japanese Grand Prix and died nine months later.

Grosjean said: “Jules saved my life. Without Jules’ accident, there probably wouldn’t have been a halo. And without halo, no more Romain Grosjean.”

He described the moments inside the car as he realised there was a fire and was struggling to get out.

“After the shock, I open my eyes,” he said. “I take off my harness, I hit something that blocks me: I think it’s the halo. I sit down and I tell myself that someone will come and help me. At this moment, I don’t realise that there is fire.

“Then I look to the left: it’s all orange; I find it weird. I understood then that there was fire because the plastic of my ‘tear off’ (visor) caught fire. I try to get out without succeeding.

“I have time to think that I will end up like Niki Lauda, ​​burnt. I tell myself that it is not possible, that I cannot end like this. I tried straight ahead, then right. Every time, I’m stuck.

“I sit down again and there is a strange moment when I see death as near as you can see it. My body almost relaxes and tells itself it’s over.

“But then I pull like crazy because my left foot is stuck under the pedal. I tell myself that I haven’t tried to slip on the other side yet.

“I put my hands in the fire, the gloves turn all black, I feel the pain, I know then that I am burning my hands. As the chest passes (the cockpit), it’s deliverance. I know I’m going to live. I pass the barrier, I feel the doctor pulling on my suit. He says to me ‘Sit down’.

“The impact, frankly, is not that bad. Everyone thought I would have a concussion or a blackout. But nothing, I can hear [FIA Dr] Ian Roberts talking to me. I immediately thought of removing the gloves, which were melting.”

Grosjean added: “The survival instinct was the strongest – even after thinking that I was going to die, I had the lucidity to think about the movement to be made.

“I saw death too closely, it’s a feeling that I don’t wish on anyone. It will change my life forever. At that point, I wasn’t scared, I wasn’t annoyed but I didn’t want it to end like this.”

Grosjean said he had since been “haunted by the idea of death” and had spoken to the psychologist he has been seeing since 2012 about it.

He re-emphasised his desire to race in the season-ending Abu Dhabi Grand Prix on 13-15 December, if possible. He is leaving the Haas team at the end of the season and does not have a drive for 2021.

“The big problem is the left hand,” he said. “It will take three weeks for it to heal. So the idea, if I drive to Abu Dhabi, is to put on cream, and a latex glove before putting on the fireproof glove.

“The rest is better, the right hand, in seven days, it’s perfect.”