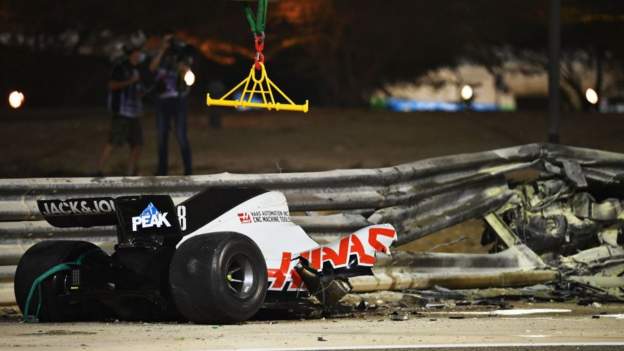 Charles Leclerc says he feared Romain Grosjean had been killed in the immediate aftermath of the Frenchman’s fiery crash in Bahrain.

Grosjean escaped with burns to his hands from a 137mph accident in which the car became lodged in the barriers.

Ferrari’s Leclerc said: “I saw the crash in my mirrors, was aware straight away that it was extremely serious and I thought the worst straight away.”

He said the minutes before he found out Grosjean had escaped “felt like hours”.

Speaking in an exclusive interview with BBC Sport, Leclerc said: “I have to be honest, I didn’t have much hope only watching it in the mirrors, and I was extremely worried on the (car-to-pit) radio.

“Unfortunately, there was no news until I got back into the pits and got out of the car to finally know he was out, which I couldn’t really believe, especially because coming into Turn Nine, I saw the flames and the fire.”

Leclerc is no stranger to tragedy in his career.

His godfather was Jules Bianchi, who suffered fatal head injuries in a crash in the 2014 Japanese Grand Prix.

And Antoine Hubert, who was killed in a Formula 2 crash at last year’s Belgian Grand Prix, was a childhood friend of Leclerc.

Leclerc said in the hour before the re-start in Bahrain on Sunday he tried to put the incident out of his mind by focusing on the race ahead.

“I just put myself in my bubble as I always do and tried to focus on my own thing,” the 22-year-old said. “There are a lot of things you need to have in mind before an F1 race, which is the strategy, how you want to attack in the first laps and all these things.

“I was just focusing on those things to achieve the best result, trying to not think about the crash any more, mostly because I knew Romain was out of the car and fine to the extent he could walk by himself to the ambulance.

“So I was just focusing on my own race after that and trying not to think about the crash any more.”

Leclerc said he had been in touch with Grosjean following the accident. The Frenchman was discharged from hospital on Wednesday. He will miss this weekend’s Sakhir Grand Prix, on a different layout of the Bahrain track, and has targeted a return to the cockpit for the season-ending Abu Dhabi Grand Prix on 13-15 December.

Leclerc said: “I sent him two messages. The first one, I don’t think he saw it because probably he received thousands of messages and the second one he replied, probably because he could write again, as I have seen on social media that they took off his bandages.

“He was able to text again and I was happy and he seems to do fine. I didn’t go to see him at the hospital because I expected lots of people there and I didn’t want to bother him.”