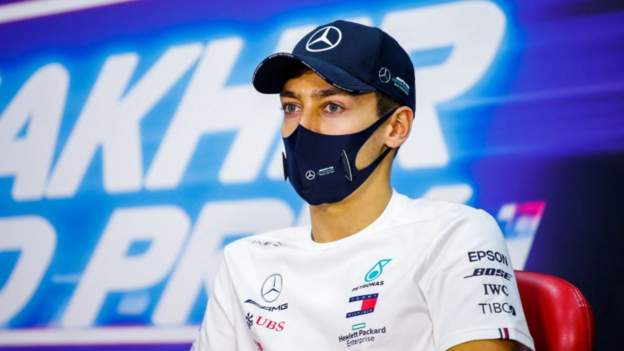 Hamilton has had to miss the race because he tested positive for coronavirus and Mercedes negotiated a temporary release for Russell from his Williams team.

Russell, who rejected the idea that it was an audition for a Mercedes seat in 2022, said: “There have been no targets expected of me by Mercedes because you can’t judge somebody off one race.”

His team-mate Valtteri Bottas’ contract lasts until the end of next season and many in F1 will see Russell’s drive at Bahrain this weekend – and perhaps in Abu Dhabi the weekend after if Hamilton does not recover in time – as a showdown between the two.

“That’s not in the back of my mind,” Russell said. “I’m going to go out there, enjoy it and learn as much as I can.

“I have a job to do on my return to Williams and try and push that team forward. I need to take this opportunity with both hands and maximise the learning. The future will be judged over the course of a season, and what’s happened in the past, not just one or maybe two races.”

Bottas admitted: “If he beats me, for sure it wouldn’t look so good on me if I had a normal race fair and square, so I try to avoid that. But I’m not a person who thinks like that, I try to turn things into motivation and positive thinking and that’s my mindset for this weekend.”

Russell pointed out he faces a tough task this weekend.

“I am being thrown in at the last opportunity,” the 22-year-old said. “I haven’t driven their simulator in two years. My seat is three years old. I have so much information to learn and going up against Valtteri isn’t going to be easy.

“Valtteri has been pushing Lewis an incredible amount over the years.

“When you are in the groove, integrated in a team – I know the level I was at at Williams. Changing suddenly, there are so many new things to learn. I have no expectations, no targets.

“I am in a good position. I am not putting any additional pressure on myself. I am going to go out and enjoy it.

“This weekend will all be about learnings, especially Friday. If I get the opportunity next week in Abu Dhabi, who knows, that will be easier.”

When did Russell first find out?

Russell said the first indication he could be in the Mercedes this weekend was a phone call from team boss Toto Wolff at 02:00 on Tuesday.

“I was actually in the bathroom, which was slightly awkward.” Russell said. “Toto said: ‘George, are you in the bathroom? And I said I am. He said: ‘Lewis has Covid, he’s doing well and feels fine, which is most important, and we want you to drive.’

“It happened through the following day. I had 64 phone calls on Tuesday pinging between so many different people. Glad we got there in the end.

“It means a huge amount to me that Mercedes gave me this opportunity, because it was not easy, a lot of effort went into making this deal happen.

“Logistically, getting helmets painted in 24 hours, getting suits flown out from Italy, so many things had to happen in such a short time.

“Knowing they were willing to do that means a lot to me and I have to repay that with my performance and best efforts regardless of what position that might mean.”

At 6ft 1in, Russell is five inches (14cm) taller than Hamilton and said it had been a “tight fit” getting him into the car.

It has required him using one size smaller driving boots than his customary size 11s.

“That’s slightly uncomfortable,” he said, “but I am sure I can endure the pain for this opportunity.”

Russell said he had yet to speak to Hamilton, who is isolation following his positive test, but that he expected to over the course of the weekend.

Russell has been replaced at Williams by the team’s reserve driver, the Briton Jack Aitken.

The 25-year-old has already driven the Williams in first practice at the Styrian Grand Prix in July and said: “I don’t have any doubts that I am ready to step in.”