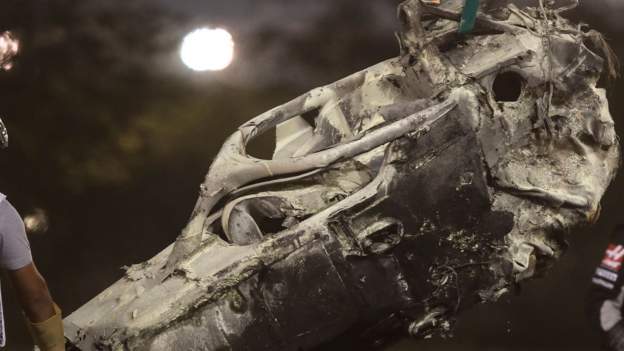 When I was racing in Formula 1 back in 2016 and 2017, I was one of several drivers who was against the introduction of the halo head-protection device. Three years later, I am very glad it was introduced against my will, after it almost certainly saved the life of one of my former team-mates.

How Romain Grosjean hobbled away from his inferno of a crash scene in Bahrain on Sunday was quite remarkable, and certainly showcased how far F1 has come in safety standards, even if the accident also raises other concerns.

Being in a burning car, having just suffered an impact of 53G at 137mph, and with some Armco barrier still covering part of your exit route, must have been absolutely terrifying.

I can only imagine it was pure survival instinct that meant Grosjean managed to get out, despite being engulfed in fire for about 30 seconds.

The halo was clearly a contributing factor in saving the Frenchman.

First, it took the hit from the barrier, even piercing the steel and almost certainly deflecting it from hitting the driver’s head on impact.

Secondly, it also meant Grosjean was afforded some wriggle room in the cockpit that may have aided his escape from his burning wreckage.

Why I was against the halo

Alongside Grosjean and several other drivers at the time, I was very anti-halo when governing body the FIA, under the guidance of its F1 director Charlie Whiting, was working to introduce it a few years ago.

I sat through many briefings about the halo during my time as a driver. It was pretty much in my time in F1 from 2015 to 2017 that the halo was introduced, from inception as an idea all the way through to implementation for the start of the 2018 season.

I spoke out against it on numerous occasions. I thought it was changing the sport in a negative manner without providing a substantial improvement.

The drivers were shown a variety of incidents and there were two in particular in which the halo would have saved the victim – notably Henry Surtees’ Formula 2 crash in 2009 and Justin Wilson’s Indycar accident in 2015.

I knew both of those drivers personally and was devastated by their deaths, but at the time I felt they were incidents that would not be seen in F1.

Surtees was killed by a flying wheel at the Brands Hatch Grand Prix circuit – an awesomely fast track with little run-off – while Wilson was hit by a part that had become detached from another car on an oval racetrack.

F1 circuits mandate a certain level of run-off areas as basic safety criteria, apart from on street circuits, where having the barriers lining the edge of the track means cars rarely have a head-on impact, and it’s unusual for life-threatening debris to be a concern.

On top of this, cars are more spread out than in other categories – particularly ovals, where the pack style of racing they provide creates an inherent danger.

Wheel tethers, which are designed to keep wheels attached to cars in the event of an accident, have also been strengthened significantly since Surtees’ accident in 2009.

Generally, I felt that the push for safety was going over the top with halo, in a sport that was already so well protected in virtually every other area, including introducing the virtual safety car following the tragic death of Jules Bianchi in 2014 after he crashed into a vehicle that was recovering another car.

To me, a canopy over the driver’s head was taking away from the very ethos of F1 – an open-cockpit sport.

But Grosjean’s accident has demonstrated very clearly that motorsport is full of dangers, some of which you cannot anticipate. Clearly, introducing the halo was the right thing to do.

The halo is just one of a number of safety improvements that have happened in recent years, some of them under the radar.

Fireproof clothing has come a long way and changes to the suits for this year to make them more protective absolutely proved their worth on Sunday, with Grosjean suffering only minor burns to his hands.

A difficult decision for Grosjean

It’s already announced that he will not drive at this weekend’s Sakhir Grand Prix at the same venue, with Pietro Fittipaldi replacing him at the Haas team.

And with the Frenchman leaving F1 at the end of the season, his short race in Bahrain may have been his final outing if he cannot race in Abu Dhabi on 13-15 December, either because of injury or through mental trauma.

With a wife and young children at home, and having been so close to disaster right at the end of his F1 career, it may be a tough decision to return from injury for a final hurrah, even if he is fit in time.

It is not a situation I have been in myself and each driver would react differently, but if he does not get a chance to drive again in F1, it would be a shame for a driver who has been in the sport for almost a decade to bow out as he did.

On the other hand, the fact that he will get to enjoy a further motorsport career, or even retirement, at all is a bonus right now.

Why the drivers can race on

For the rest of the drivers, it would have been hard to refocus on the grand prix that did get under way eventually on Sunday.

Seeing one of their colleagues survive such a horrific-looking crash would have pressed home the dangers of motorsport once more, and having to go back out on to the track, past the incident site, and race on would have been tough.

Inevitably, though, in these moments, once the helmet goes on, the visor comes down and you leave the pit lane, there is so much to focus on and things to do that you go back into racer mode and put the danger to the back of your head again.

After the race is when they can reflect on the accident in full and, along with the FIA, try to understand what went on. After all, F1 returns to the same circuit next week, albeit on a different layout.

After an accident like this, the drivers will want assurances from the FIA safety experts as to what caused it and what will be done to stop it happening again.

Grosjean’s impact was big, but we have seen bigger offs in the past and less horrendous outcomes.

The fact the car went through the barrier rather than ricocheting off it appeared to be the cause of such a shocking result.

The FIA will conduct a thorough investigation into what went wrong in this instance and what it can improve.

It will be looking into the structure and position of the barrier, making sure it was fitted properly and of the correct strength. Assuming those were all right, there will be deeper questions.

The angle of the barrier jutting out cannot have helped, but F1 cars are the heaviest and fastest they have ever been.

Kimi Raikkonen had a similar high-speed accident in his Ferrari at Silverstone in 2014, into a barrier similar to the one Grosjean hit on Sunday. It was a big accident that destroyed the car, but he ricocheted back across the circuit and walked away from it.

The barrier that day was damaged, and repairs took place, but fundamentally it did its job.

In 2014, the minimum weight limit of F1 cars was 690kgs; in 2020 it is 746kgs – almost 10% higher. On top of this, the cars are considerably faster, both in cornering and in a straight line, with lap times six seconds quicker. The amount of energy that needs to be absorbed by the barriers in an accident has therefore become significantly higher.

F1 cars are put through immense crash-testing procedures at the start of the season. But while they have become so impressively strong, I’m sure there will now be investigations to ensure the barriers can cope with the increased loads.

The immediate concern is that the same type of barrier Grosjean hit lines almost the entire Bahrain circuit, and F1 cars are able to get up to – and therefore crash – at higher speeds than Grosjean did.

This incident comes at a time when there was already unease among the drivers in recent weeks about a series of incidents.

Cars were released on to a slippery track in qualifying at the previous race in Turkey while a crane was still in a run-off area.

At the race before that, in Imola, drivers were unlapping themselves at almost full racing speed at the end of a safety-car period while marshals were brushing the side of the track, at exactly the spot another driver had crashed behind the safety car going over a bump.

Then, in Bahrain, a marshal ran across a live track late in the race with a fire extinguisher in hand to attend Sergio Perez’s stricken Racing Point car, bringing back worrying memories of the incident that killed Tom Pryce in the the 1977 South African Grand Prix.

Historically, the FIA has done an incredible job of learning from accidents, reacting and implementing changes – halo being the perfect example. But there currently seems to be a risk of forgetting some vital lessons the sport has learned along the way.

Often in the past, it is fatal accidents that have brought about safety improvements.

On this occasion, if safety improvements must be made again, then we can thank the existing measures that it has not come at the cost of a driver’s life once more.