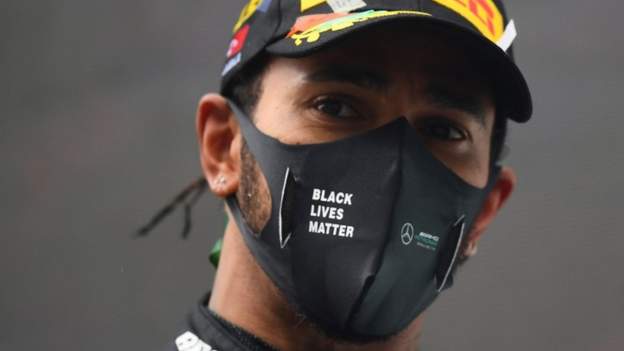 Lewis Hamilton says Formula 1 “needs to do more” to try to improve human rights issues in some of its host countries.

Hamilton said he had received letters from rights groups on arriving in Bahrain and would “take some time to digest them”.

“It is very important for all sports to use the platform they have to push for change,” the seven-time champion said.

“The human rights issue in so many of the places we go to is a massive problem.

“We are one of the few sports that go to so many different countries and I do believe as a sport we need to do more.

“We have taken a step in the right direction but we can always do more.

“They have put some steps in place for the places we go to but it is important to make sure they are implemented in the right way and that we see some action taken.

“That is going to take some work but it’s all in the background.”

Bahrain is just one of F1’s host countries about which human rights groups have raised concerns. Others include Russia, China, Azerbaijan, Turkey and the United Arab Emirates, as well as Saudi Arabia, which is making its debut on the calendar next year.

Hamilton became the most successful racing driver in history when he won the title at the last race in Turkey, equalling Michael Schumacher’s tally of seven titles having already surpassed the German’s record of race victories.

The Mercedes driver said of his achievement: “I don’t think it has sunk in yet, probably because we’re still racing and you’ve got to keep one eye on the job.”

But the Briton, 35, said he was determined to keep winning in the three races on consecutive weekends that close out the season, two in Bahrain followed by one in Abu Dhabi.

“That’s what we exist to do,” he said. “It’s what we all work to do, what every single person in the team works towards.

“We still have work to do, we have incremental improvements to work on. Every opportunity we get to be on track, we are still challenged and learning and developing, we’re on a constant journey to try to improve.

“It is not easy to do when we have had the success we have had. But we all love that challenge and I love how it unifies us all. We are constantly evolving in how we work as a team.

“It is in my DNA. It is how I’m wired. I love that challenge, coming to another race where the pressure is different and the focus is on getting the best out of this weekend. How can we extract more, learn more, almost use them as test races, so we can apply what we learned this year into next year’s car?”

Following reports that he is to receive a knighthood in the New Year’s Honours list, Hamilton said that if the reports were true “it would be an incredible honour – there is no greater honour than your country recognising you with such an award”.

And he said it had been “surreal” to hear his achievements recognised in Parliament.