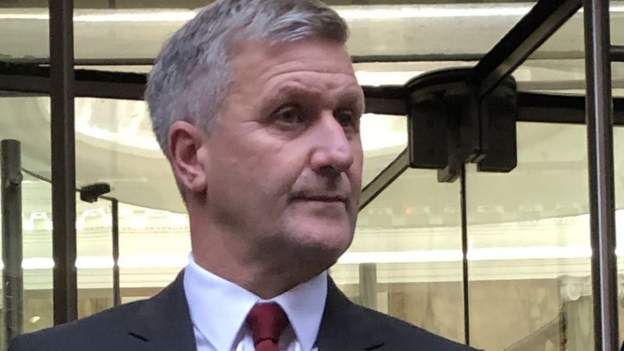 The General Medical Council’s QC Simon Jackson asked Freeman how accurate that was at the hearing on Friday.

“We are getting into realms of patient confidentiality,” replied Freeman.

He added he could speak about those three “well-publicised” TUEs but did not have permission from Wiggins to talk about anything else.

Wiggins was granted TUEs to take the corticosteroid triamcinolone, which can treat allergies and respiratory issues, shortly before the 2011 Tour de France, his 2012 Tour win and the 2013 Giro d’Italia.

Wiggins has denied any wrongdoing and told BBC Sport in 2018 that the timing of those TUEs was because of the “type of grass pollen I am allergic too”.

Freeman was asked by BBC sports editor Dan Roan in 2018 how many TUEs he applied for on behalf of Wiggins, whether for triamcinolone or any other substance.

He said at the time: “I can tell you that because I have his permission to talk about his asthma and his allergies and I only ever applied for three TUEs – 2011, 2012, 2013 – for the treatment of allergic rhinitis, aka hay fever.”

Jackson said on Friday he asked Freeman about the matter because it related to the “issue about your reliability or truthfulness”.

Dr Freeman has been accused by the General Medical Council (GMC) of ordering 30 sachets of Testogel to the National Cycling Centre in 2011 “knowing or believing” it was intended to boost an athlete’s performance.

He has admitted 18 of 22 charges against him, which include initially lying to try to cover up the order, and to a UK Anti-Doping (Ukad) investigation.

He also told the tribunal earlier this month that he destroyed the package of testosterone and a laptop which may have contained medical data crucial to a doping investigation.

But Dr Freeman denies the key accusation that he doped a rider, saying he was bullied into ordering the drug by former British Cycling and Team Sky performance director Shane Sutton to treat his erectile dysfunction.

Sutton has denied those claims, insisting the doctor is lying.

On Friday, Freeman was also asked about an email sent in February 2011 to him and Dr Steve Peters, who was British Cycling’s head of medicine, from an Italian doctor, referred to as ‘Dr FF’.

Jackson said Dr FF mentioned a number of methods for rider recovery, including some intravenous and that recovery had to start when a rider was not yet tired.

Freeman said some of the email left him “astonished”, “astounded” and “horrified”, and that he disagreed with a lot of it.

He said minerals and vitamins should be given “when needed, not as a preventative” and he would be “alarmed” by talk of giving recovery to riders not yet tired.