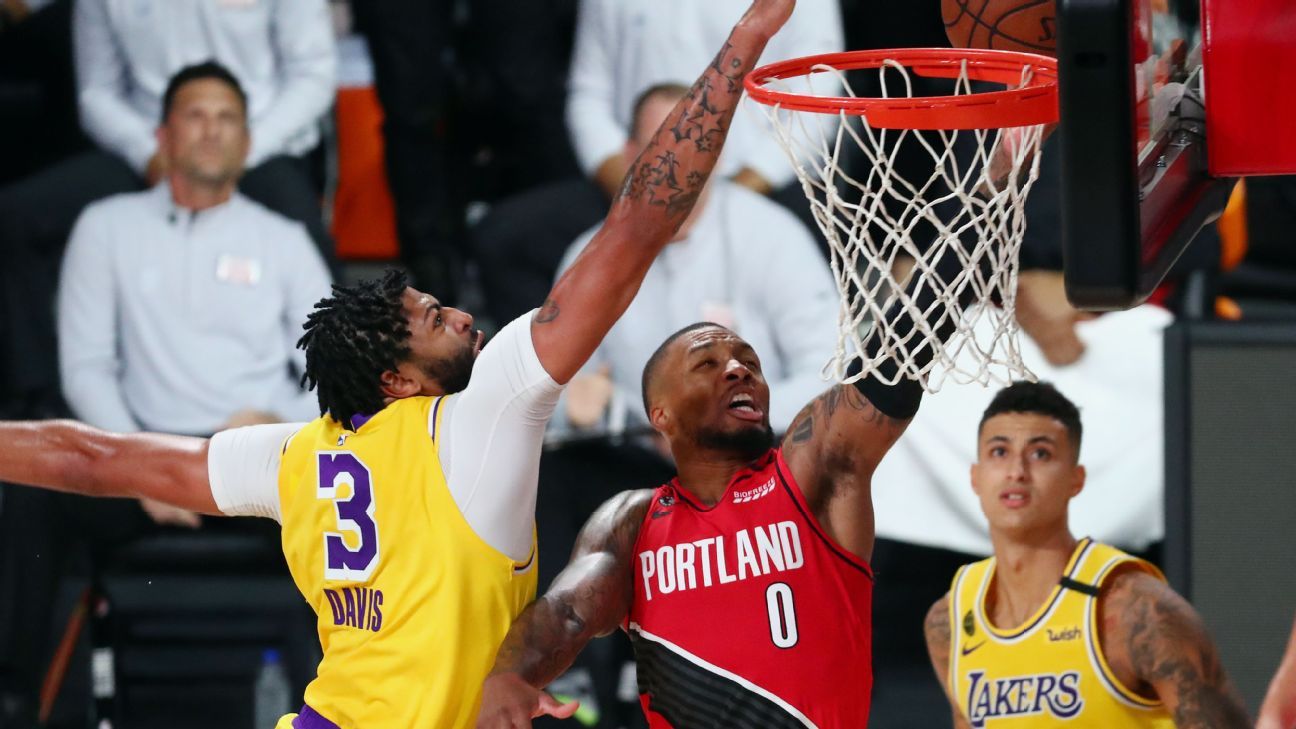 LAKE BUENA VISTA, Fla. — LeBron James missed seven of the 11 shots he took in the Los Angeles Lakers‘ 111-88 Game 2 win over the Portland Trail Blazers, with his 10 points Thursday accounting for the fewest he has scored in a win in his 241 career playoffs games.

It helps to have a teammate such as Anthony Davis.

In tying up L.A.’s first-round Western Conference series 1-1, Davis led all scorers with 31 points on 13-for-21 shooting (including 3-for-4 from 3) and had 11 rebounds, 3 assists, a steal and a block in 29 minutes. It marked the first time that a Lakers player scored 30-plus points in less than 30 minutes since Kareem Abdul-Jabbar did so in 1987, according to Elias Sports Bureau research.

“I’ve had some great teammates in my career,” James said. “AD is one of those unicorns, and he does things that some of my other great teammates are not capable of doing.”

James quickly mentioned Dwyane Wade, with whom he won two championships as part of the Miami Heat, and Kyrie Irving, with whom he teamed to win a ring with the Cleveland Cavaliers, as Davis’ elite company. But the point was clear: Davis is as dominant a running mate as a player could hope for.

As effective as Davis was offensively — making up for a shaky 8-for-24 shooting effort in Game 1 — his defense helped hold a Portland team that averaged 126 points in the seeding round to a season-low 88 points on 40% shooting.

Although Lakers coach Frank Vogel stuck with the same starting lineup as in the series opener, he used Davis at center on Thursday — to great effect. L.A. outscored Portland by 15 in the 15 minutes in which Davis played the 5, and Davis scored 22 of his 31 points in that stint, according to ESPN Stats & Information.

The most staggering impact with Davis at center, however, was Portland’s shooting just 5-for-22 from the field while Davis manned the middle, according to Second Spectrum data.

“We’re competing at a very high level,” Vogel said after what was without a doubt his team’s best showing since it arrived in Florida. “The care factor on the defensive side of the ball is where it should be for playoffs, to win in the playoffs. We have tremendous, tremendous respect for the offensive firepower of the basketball team that we’re playing.”

Davis has even greater respect for James, who was instrumental in his getting to L.A. in the first place. James told ESPN in December 2018 that it would be “amazing” and “incredible” if the Lakers could somehow acquire the versatile big man.

A trade between the Lakers and New Orleans Pelicans was agreed upon six months later, and Davis and James paired to lift the Lakers franchise through a renaissance season on the court, albeit a trying one off of it.

“I mean, it started from training camp, to preseason, traveling abroad, to entering the New Year, the tragic death obviously of Kobe [Bryant] and those victims on that helicopter, to the stop of the season, to players getting injured, [Rajon] Rondo going down for a big piece of the year, to the restart, not having our brother Avery Bradley here,” James said. “And so on and so on. I don’t even know. It just feels like it’s been three or four different seasons [in one], so I know what we’re capable of. I know how we’re built.”

James knew that Davis would have more to give Thursday than he did when the No. 8-seeded Blazers upset the No. 1 team in the West in the series opener.

“I was really down on myself after Game 1,” Davis said. “I didn’t feel like I performed to the level I needed to. And he let me have my moment and kind of get on myself, and then he talked to me and said I was fine.

“He said it’s one game, and as a guy who’s won multiple championships and been in these situations before, he knows what to expect. He knew what to expect from his teammates, and he kind of just was there for me to kind of encourage me and keep me levelheaded. Because it was just one game.”

Thursday’s game marked one win the Lakers had been awaiting for a long, long time. It had been more than eight years — 3,016 days, to be precise — since the franchise won a playoff game on May 18, 2012.

Davis was in college then. James was en route to his first title with the Heat. Now they’re together, trying to stack up 15 more wins in the bubble to bring the Lakers their first championship in a decade.

“Our relationship has been great the entire season,” Davis said of James. “I’ve kind of just been leaning on him this entire season, just trying to figure out the tricks [of the] trade of playing with a guy like him and a team like this. … He kind of has been there for me and supporting me and kind of guiding me through this entire process.”

Once James’ pep talk was delivered following Game 1, communication was cut off leading to tipoff Thursday.

“He didn’t say one word to me today,” Davis said. “He kind of already, I mean, he kind of knew. He saw the look on my face from the beginning.”

James did pipe up after the game, however.