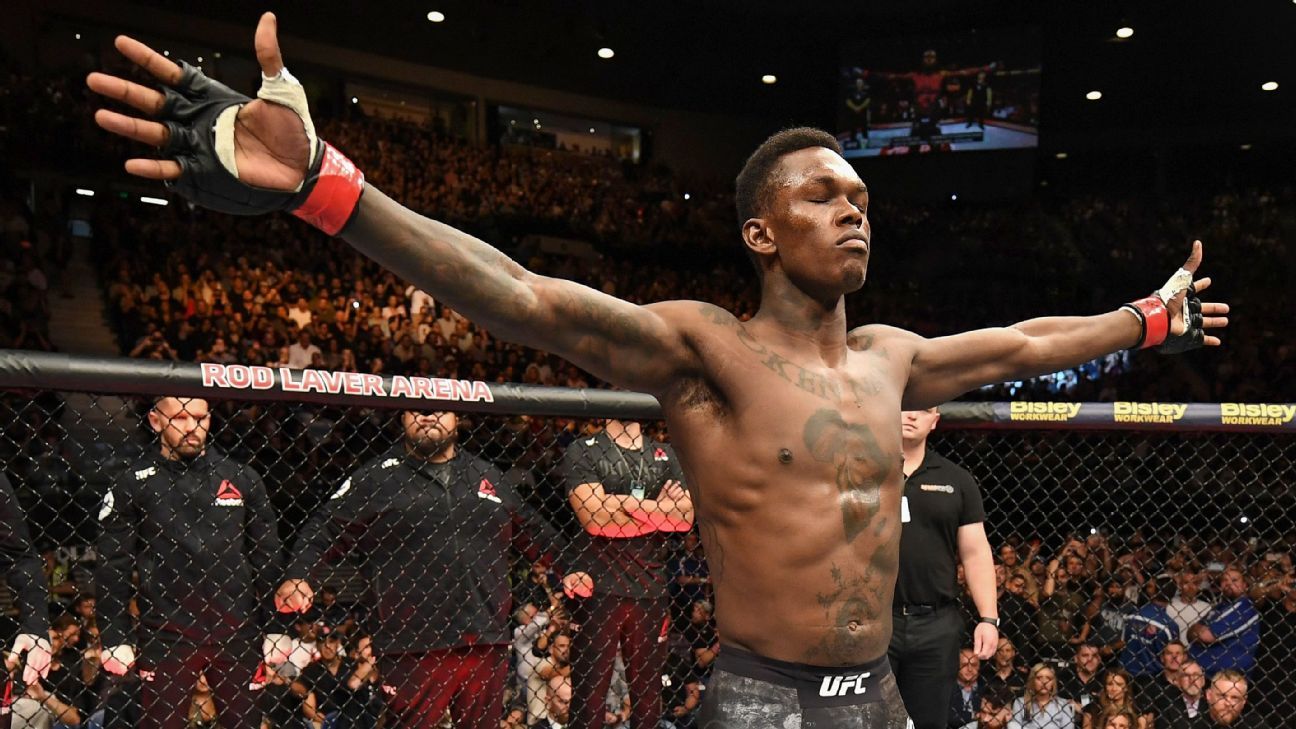 The two men fighting for the UFC middleweight title next month got into a heated verbal exchange Thursday night.

Israel Adesanya, the division’s champion, and challenger Paulo Costa fired pointed barbs during a satellite interview with Michael Eaves on SportsCenter. At one point a fiery Costa even unbuttoned his shirt to show off what he has touted as a superior physique.

Costa took umbrage with the way he believes Adesanya, who was launching expletive-laden insults, is promoting the UFC 253 main event. The card is scheduled for Sept. 26 at a location yet to be determined. The headliner will be only the second time in UFC history that two undefeated male fighters compete for a title.

“I don’t like these kind of [trash-talkers] and I believe the fans [don’t] also,” said Costa, who did the ESPN interview with coach Eric Albarracin from his home country of Brazil. “This sport don’t need this kind of attitude. You don’t need this to sell a good fight. You just need to go and make a good fight.”

Costa blasted Adesanya’s lackluster performance from UFC 248 on March 7 against Yoel Romero for its lack of activity. Adesanya said it will be actually Costa who makes their title fight entertaining.

The two men have been feuding, mostly on social media, for more than two years. Adesanya went after Costa verbally in his postfight interview after that UFC 248 win over Romero. Costa, who was sitting in the front row, attempted to jump the barricade and enter the Octagon, but he was held back by security.

“I will face you very, very soon, and I will have an opportunity to show you what I tried to show on that moment,” Costa said.

Adesanya (19-0) has won all eight of his UFC fights. The Nigerian-born New Zealand resident knocked out Robert Whittaker to win the middleweight title at UFC 243 last October. Adesanya, 31, is ESPN’s current No. 7-ranked pound-for-pound MMA fighter and the top-ranked middleweight.

Costa (13-0) has won five UFC fights, four of them by KO/TKO. The Brazilian slugger has 11 KO/TKO stoppages in 13 pro wins. Costa, 29, is ESPN’s No. 3-ranked middleweight MMA fighter. On Thursday, Costa paid Adesanya, whom he calls “skinny guy,” a backhanded compliment, saying Adesanya is very skilled — “at running away, avoiding the fight.” Adesanya said Costa will find out for himself at UFC 253.

“When someone brings the fight, I f—ing fight,” Adesanya said. “You say you’re gonna bring the fight, right? Bring that s—. … Yes [Costa is] dumb, but that’s what makes him dangerous as well because he’s not scared to walk forward and throw and he’s strong, but the same thing happens when they step in the cage with me, when they see me and feel me, they say, ‘Oh my God, he’s a lot stronger than I thought. Oh my God, he’s a lot bigger than I thought.’ It’s nothing different.”