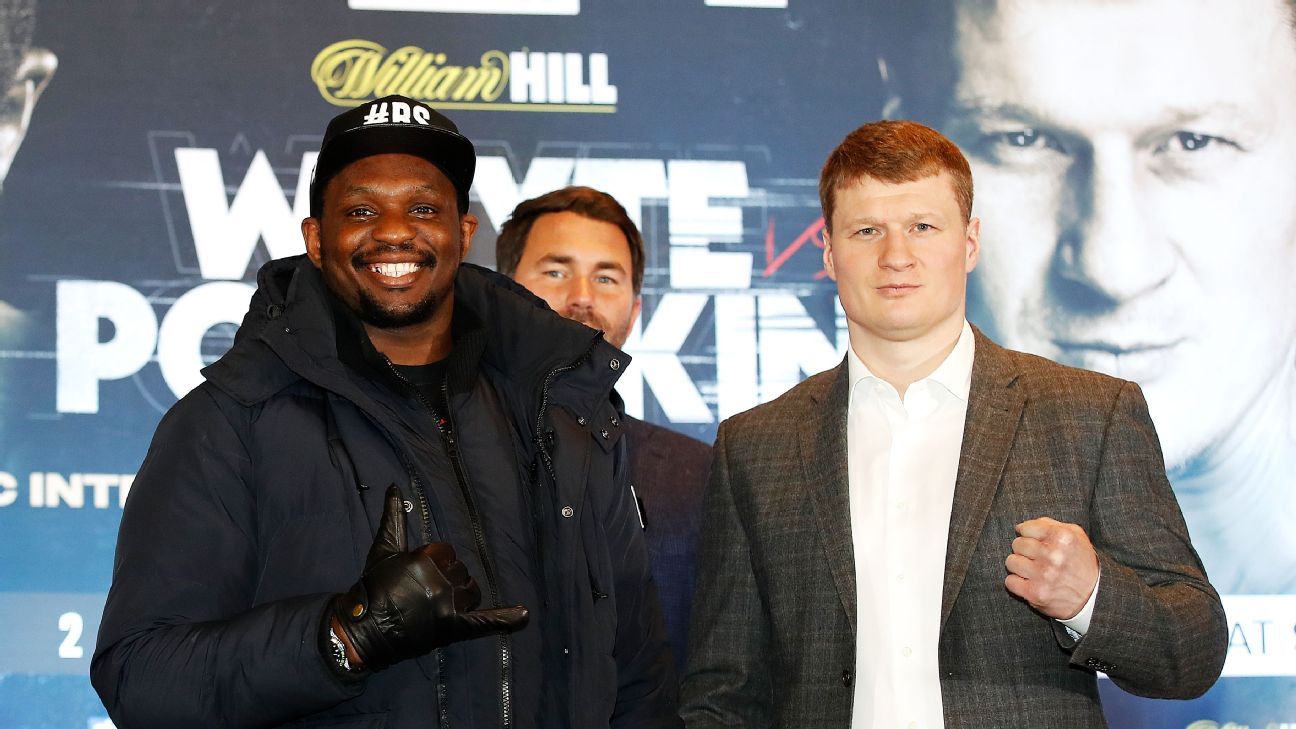 As we approach the end of summer, the boxing schedule continues to heat up. This weekend’s boxing action includes a pivotal heavyweight clash at “Fight Camp,” a high-stakes light heavyweight title eliminator inside Top Rank’s bubble in Las Vegas and the return of a former two-time welterweight champion.

A weekend of boxing around the globe kicks off Friday in Spain, with a 45-year-old future Hall of Famer coming back after six years away, followed by a nighttime card featuring a pair of young prospects from Puerto Rico. By the time the weekend is over, Shawn Porter could line himself up as a future challenger for the winner of Errol Spence Jr.-Danny Garcia, and the WBO light heavyweight title picture will be a lot clearer.

Here’s a look at what’s in store.

The last time boxing fans saw Sergio Martinez in the ring, he struggled mightily against Miguel Cotto, with an injured knee at Madison Square Garden in June 2014. He was sent to the canvas three times in the first round, and Martinez retired on his stool at the start of Round 10.

What was once one of Martinez’s greatest attributes — his legs, which allowed him to glide around the ring — betrayed him. After that fight, it seemed that Martinez would never return to the sport.

Yet six years after he lost his WBC middleweight championship, he returns to the squared circle in a scheduled 10-rounder against Jose Miguel Fandino (15-6, 8 KOs). It seems like a relatively safe fight, but there is always some level of risk when punches are being thrown.

Lou DiBella, who promoted Martinez (51-3-2, 28 KOs) throughout his prime, admits that he is surprised by Martinez’s decision to fight again. Although the decision to return to the ring at this age is often motivated by economics, that doesn’t seem to be the case here.

“I don’t think he needs the money,” DiBella said. “He didn’t have any bad habits. He’s done very well outside of the ring — very, very well. … I don’t know what it is.”

DiBella had a chance to work with Martinez on this venture, but when he declined, Martinez asked for his release — and his blessing.

“I will watch,” DiBella said, “because the guy’s my friend and because he’s going to do it with or without my support. I’m going to watch because I care about him. But I wish he wasn’t doing it. He knows that.”

Although the main event on this card from Kissimmee, Florida, (Telemundo, 12 a.m. Saturday) is a featherweight dust-up between Saul Juarez (25-11-2, 13 KOs) and Axel Aragon Vega (13-3-1, 8 KOs), the most compelling element of this card, which takes place at Osceola Heritage Park, is a pair of young boxers from Puerto Rico who are promoted by Top Rank.

Featherweight Henry Lebron (12-0, 9 KOs) faces Luis Porozo (15-3, 8 KOs) in a scheduled eight-rounder. Lebron is an aggressive southpaw with power in both hands. He’s just 22 years old, and he has been developing his skills nicely.

Also on this card is Omar Rosario, who was a six-time Puerto Rican national champion and will be making his pro debut. Boxing at 152 pounds, he compiled an amateur mark of 175-34 and won the 2020 Olympic Trials at that weight but made the decision to turn pro.

“I worked extremely hard to get here, and this is a testament to the hard work we do in and out of the ring. I am ready to conquer the boxing world and become Puerto Rico’s next superstar,” said Rosario, who hails from Caguas, the same city that produced Miguel Cotto.

Much of the attention will be on the main event in this edition of Fight Camp (DAZN, 2 p.m. ET/11 a.m. PT), a heavyweight bout between longtime WBC No. 1 contender Dillian Whyte and former titleholder Alexander Povetkin. But there’s another fight that has plenty of intrigue: a rematch between two of the top pound-for-pound fighters in the world, Katie Taylor (15-0, 6 KOs) and Delfine Persoon (44-2, 18 KOs), for the undisputed lightweight championship.

In June, they met in an entertaining, back-and-forth battle at Madison Square Garden for the undisputed lightweight championship. After 10 rounds, it seemed that Persoon had done enough to win the lightweight titles. Instead, she found herself on the short end of a majority decision.

“It’s up to me to prove that I also deserve the titles. In New York, for us, it was not the correct decision,” Persoon said at Thursday’s news conference. “Everybody thinks [I won the first fight with Taylor]. It’s good there is a rematch. We will see who is the best fighter. We were very surprised Katie is taking this risk. For her, it is a big risk. If she loses, it isn’t good for her career.”

Persoon has a keen understanding that she is still going up against the house fighter in her opponent’s promoters’ backyard — literally.

“I have to start the fight faster than last time, with a higher tempo. But I can’t change the whole thing,” Persoon said. “My way of boxing is with pressure. I can box also on the back foot, but a lot of the time, my opponents don’t pressure me. But I can do it. I spar with guys in Belgium who are stronger than me. They give me problems, and I find solutions.”

Despite getting her hand raised in victory in the first fight, Taylor is looking to clear up any doubts about who is the superior fighter of the two.

“This is a legacy-building fight for me and Delfine,” Taylor said. “We’re both in this sport to prove that we are the best. You have two fighters here that absolutely believe that they are going to win. We both think we’re going to win. That’s what makes this such a fantastic fight. I want to be involved in the biggest fights, and that’s why I wanted this rematch.”

Another fight to keep an eye on is a welterweight clash between Luther Clay (13-1, 5 KOs) and Chris Kongo (11-0, 6 KOs). Clay isn’t a particularly powerful puncher, but his creativity inside the ring has kept him in the win column in all but one of his pro fights, including eight straight coming into Saturday.

Porter looks to reenter the title mix at welterweight

Porter faces the relatively unheralded Sebastian Formella in a 12-round welterweight contest at the Microsoft Theater in Los Angeles (FOX, 8 p.m. ET/5 p.m. PT) — a fight that is billed as a WBC and IBF title eliminator. Currently, those two belts are held by Spence, who defeated Porter last year in a unification bout and is set to face Danny Garcia in the fall.

But Porter, a veteran of the sport, is taking it in stride.

“I’ve been there before,” he explained to ESPN. “My fight with Andre Berto [in 2017] was a title eliminator, and then I got put in a fight right behind him with Adrian Granados in [another] title eliminator.”

Porter got his title shot in his next fight in September 2018, and he outpointed Garcia to win the vacant WBC world title.

“I’m not stuck on the titles of the fights anymore. I’m just going in there with Formella as if he is a championship fighter, and we’ll handle the rest of it as it comes,” Porter said.

He’ll certainly be an interested observer of the Spence-Garcia clash on Nov. 21. Whom does he want to win for his own self-interest?

“I want whatever is best for me out there,” Porter said. “We said when we were lining up, myself and Errol, to fight each other, we both thought that the winner would get Manny Pacquiao. Neither of us is getting Manny Pacquiao.

“I’ve grown a lot in this sport. I’ve seen a lot. I’ve experienced a lot. One thing I know is I can tell you I want to fight the winner of Errol Spence Jr.-Danny Garcia, and there’s no telling who I’m going to get and when I’m going to get them after this fight. So I’m not focused on anything but this fight.”

Alvarez vs. Smith as Top Rank reenters its Vegas bubble

There’s plenty to unpack on this card, as Top Rank returns to the MGM Grand Conference Center (ESPN+, 7:30 pm, ET/4:30 pm, PT) for the first time since July. Clay Collard, who has developed a cult following thanks to two victories inside the bubble, makes another appearance and tries to stretch his record for the year to 4-0. We also have a matchup of unbeaten 140-pounders in Julian Rodriguez (19-0, 12 KOs) and Anthony Laureano (13-0, 4 KOs).

Taking center stage is the WBO light heavyweight title eliminator between Eleider Alvarez (25-1, 13 KOs) and Joe Smith (25-3, 29 KOs). The winner will face the Maxim Vlasov-Umar Salamov winner for the right to fight for the vacant WBO world title. Smith-Alvarez was scheduled for July before a shoulder injury during training camp forced the fight to be postponed.

“I didn’t take much time off. I was still working out, still going to the gym,” Smith said.

It has been four years since Smith had a magical run when he shocked Andrzej Fonfara with a first-round TKO victory and then knocked Bernard Hopkins out of the ring and into retirement with an eighth-round KO in the following fight.

”I need another fight like Fonfara or Hopkins,” he said, laughing at the thought. “I’m looking forward to this fight, and hopefully I can turn it into a night like that.”

Sullivan Barrera broke Smith’s jaw in Smith’s next outing in the summer of 2017 in Los Angeles. Smith fought valiantly but lost a clear 10-round decision. After recovering with a first-round TKO over Melvin Russell in 2018, Smith got a title shot against Dmitry Bivol last year and suffered a one-sided, unanimous-decision loss before rebounding with an impressive victory against Jesse Hart in January.

It’s easy to wonder if Smith will ever capture lightning in a bottle as he did four years ago. Perhaps it’s a more difficult task than before because there is no longer that element of surprise.

Smith’s ability to box, which will augment his heavy hands, could carry him to victory, but it won’t come easily against Alvarez, who is currently ranked sixth among light heavyweights by ESPN. Alvarez scored a highlight-reel KO over Michael Seals his most recent time out, and the seasoned veteran defeated Lucian Bute and Jean Pascal before knocking out Sergey Kovalev in 2018 to capture the WBO belt.

Alvarez’s only defeat came against Kovalev in their rematch. Smith is aware of the challenge that lies ahead and hopes that conditioning and the difference in age — he’s 30, 6 years younger than Alvarez — work in his favor.

“He’s definitely a durable guy, so you don’t want to blow yourself out in the beginning,” Smith said.