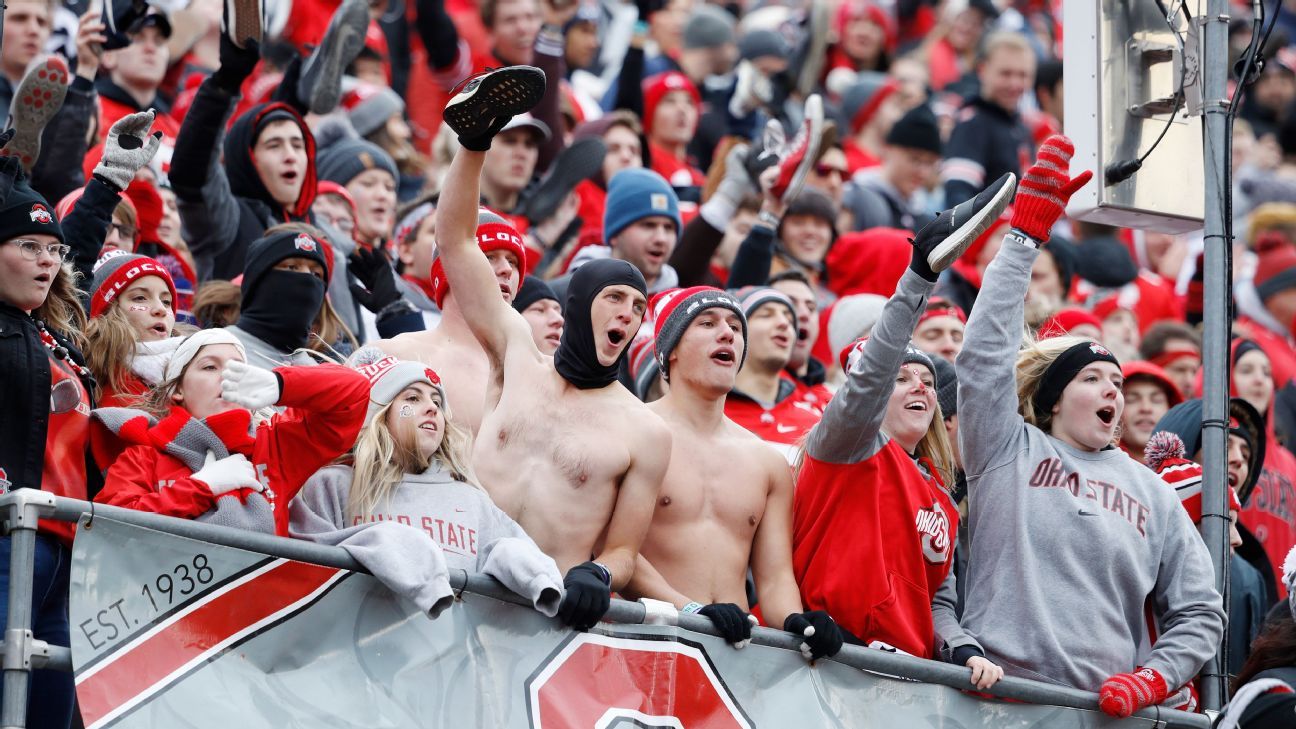 The longest offseason in our lifetime got a lot longer for the Big Ten and Pac-12 last week with the postponement of fall college football seasons.

Obviously, this is a painful thing for fans of the greatest sport on the planet. To make it even worse, the ACC, Big 12 and SEC are still scheduled to play, leaving the potential for four months of bye weeks in the fall for fans of sidelined teams.

The upside is all bets are off, and allegiance gets a one-year pass. We studied each team for potential matches. Some are obvious similarities. Others offer a chance to see how the other half lives for a season.

About me: Trying to hang in there, catch someone by surprise.

Why you’ll hit it off: A defensive-minded coach with a conservative offensive approach will feel right at home. Illinois upset No. 6 Wisconsin 24-23 last season and finished 6-7. South Carolina beat No. 3 Georgia 20-17 and finished 4-8.

About me: Football isn’t my strong suit. But we’re turning things around.

About me: Love life on the plains, scary birds, feeling dependable yet dangerous.

Why you’ll hit it off: You both understand the unpredictability of football season. You could win eight games with some close losses, or mess around and win 12 and crush the dreams of a national title contender. You have the experience and temperament to jump on this train.

About me: In search of stability after some big changes lately.

Why you’ll hit it off: We know it’s tough to root for an old ACC rival. But you know what helps? When the enemy of your enemies becomes your friend. Spend a season rooting against old ACC rivals like Duke, North Carolina and NC State — the ones you used to battle in that other sport you love just a little more.

Why you’ll hit it off: You both have won — a lot, more than 900 victories each. The past decade or so hasn’t been so kind, but this might be your year.

About me: Fan of upsets, chaos, defense and Pat Narduzzi.

Why you’ll hit it off: Michigan State fans can claim Pat Narduzzi as their own again and recall the glory days when he teamed with Mark Dantonio for huge wins. In some otherwise mediocre Pitt seasons, however, Narduzzi, ended UCF’s 27-game winning streak last season, beat No. 2 Miami in 2017 and beat No. 3 Clemson in 2016.

About me: Retro vibes (love 1960), but my division rivals celebrate the 1990s. Millennial coaches are the blueprint.

Why you’ll hit it off: Coach P.J. Fleck took you on a Prefontaine pace to the sport’s ELITE. Row The Boat on over to Columbia, where the Tigers are facing a brutal schedule in Eli Drinkwitz’s first season at the #NewZou and could use some of that energy.

About me: Corn is life. Dislike authority. Proud Midwesterners.

Why you’ll hit it off: The Cyclones might be old conferencemates, but you owned them. Now they’ve got a solid team with one of the best quarterbacks in the country, Brock Purdy. Wouldn’t it be fun to root for the Clones against Texas and Oklahoma?

About me: Defense is awesome, any offense is a bonus. Big fan of purple.

About me: Love dynamic quarterbacks, linebackers, not a fan of neighboring states.

Why you’ll hit it off: You both wonder what might have been if quarterback Justin Fields got to take the field. Ohio State is the most recent team not named Clemson to end Alabama’s season with a loss, in the 2015 Sugar Bowl. You could give Georgia a little mojo in return for Fields.

Justin Fields joins Zubin Mehenti, Jay Williams and Keyshawn Johnson to address why he is petitioning the Big Ten to reinstate its football season.

About me: Committed, but still have an independent streak. Love history, tradition.

Why you’ll hit it off: Put aside the old grudges and root for a return to the blueblood days when the independents can show up and show these conference folks how it’s done.

About me: Engineering upsets is my passion. Love transportation and gold stuff.

Why you’ll hit it off: Take the Boilermaker Special to catch a ride in the Ramblin’ Wreck. Surely you can appreciate a school whose fight song says “I’m a ramblin’, gamblin’ hell of an engineer!”

About me: Just happy to be here.

Why you’ll hit it off: Look, 151 years ago, you started college football. We love you for it, but it hasn’t always been easy for you. So live a little this season. This one’s on us.

About me: Keep the cooler stocked. Make sure there’s plenty of space for a tailgate. Get ready for some defense.

Why you’ll hit it off: You’ve already gotten to know each other a bit with games in Houston in 2014 and Madison in 2016, and you got along swimmingly. Put on some sausages, have a few drinks and you’ll feel right at home.

About me: Bit of an outsider, looking for some company to talk hoops.

Why you’ll hit it off: A spear isn’t as effective as a pitchfork, but Arizona State has gotten progressively worse on offense since Norvell departed as coordinator following the 2015 season.

About me: Extremely proud of being a top-ranked public academic institution, look good in blue, love going to a bowl game on occasion.

Why you’ll hit it off: Rooting for the Cavaliers will be a similar experience for Old Blues, as neither program has won an outright conference title in over 60 years. Both did, however, finish in the top four of U.S. News & World Report’s ranking of the top public universities in the country last year. Not a bad trade-off.

About me: Outdoorsy, looking for something new.

Why you’ll hit it off: The Appalachians aren’t the Rockies and the Sun Belt isn’t the Pac-12, but a couple trade-offs for a rare chance to win a conference title has its appeal.

About me: New-school blueblood. Prefer quarterbacks with shampoo spokesman potential.

Why you’ll hit it off: Clemson is the program Oregon fans thought they were on the verge of becoming under Chip Kelly. This is a course correction.

About me: Fan of Halloween colors, not big on recruiting rankings. Wary of rivalry games.

Why you’ll hit it off: It’s just a one-year thing, so why replace a perfectly good orange-and-black OSU wardrobe if you don’t have to?

About me: More tortoise than hare; more train than plane. Smart, calculated and proven.

Why you’ll hit it off: When you’re on vacation where money isn’t an object, do you rent the reliable car with good gas mileage you left at home in the garage? No. You get the fast, fun car and savor the experience. Take a gap year and enjoy the ride.

About me: Love big, historic stadiums. Live among the most fertile recruiting grounds in the country. One top-10 finish in the past two decades.

Why you’ll hit it off: UCLA can relate to A&M’s frustrations about punching below its weight class and hope the Aggies finally break through. There might even be some lingering guilt about erasing a 34-point deficit to beat A&M at the Rose Bowl in 2017.

About me: Frustrated traditional power, enjoy living by the beach and talking about the good ol’ days (that weren’t that long ago).

Why you’ll hit it off: USC fans have been feeling sorry for themselves lately and what could serve as a better reality check than cheering for Miami for a season? Call it a lesson in “it could be worse.”

Pac-12 commissioner Larry Scott discusses the possibility of a spring football season and says that if there isn’t a way to do it safely, the conference won’t play.

About me: Eventual Pac-12 champion, social media powerhouse and, according to the NCAA, a 2008 national champion.

Why you’ll hit it off: What better way to start a new relationship than, “Hello, fellow 2008 national champion!” Urban Meyer’s path from Salt Lake City to Gainesville seemed to work out pretty well, so why can’t the Utah fan base follow suit? The real answer here, of course, is whoever’s playing BYU.

About me: Big on boating, love dogs and savoring the glory of a 1990s title.

Why you’ll hit it off: Excitement is building in Knoxville after six consecutive victories to close the 2019 season, so it’s a great time to hop aboard and exchange sailgating tips.

About me: Looking to move on after eight years living the Air Raid lifestyle and find something more stable.

Why you’ll hit it off: Some things are hard to quit. Does anyone really want to watch a team coached by a man who finds punting on fourth down an acceptable decision?

About me: Hate being left out. Like taking on the system. When invited to a Fiesta (Bowl), turn out to be the life of the party.

Why you’ll hit it off: It’s the best shot in years for an outsider to crash the College Football Playoff, with ESPN’s Playoff Predictor giving UCF a 27.2% preseason chance to make it. We know you’d rather be the one doing the crashing, but the precedent will go a long way.