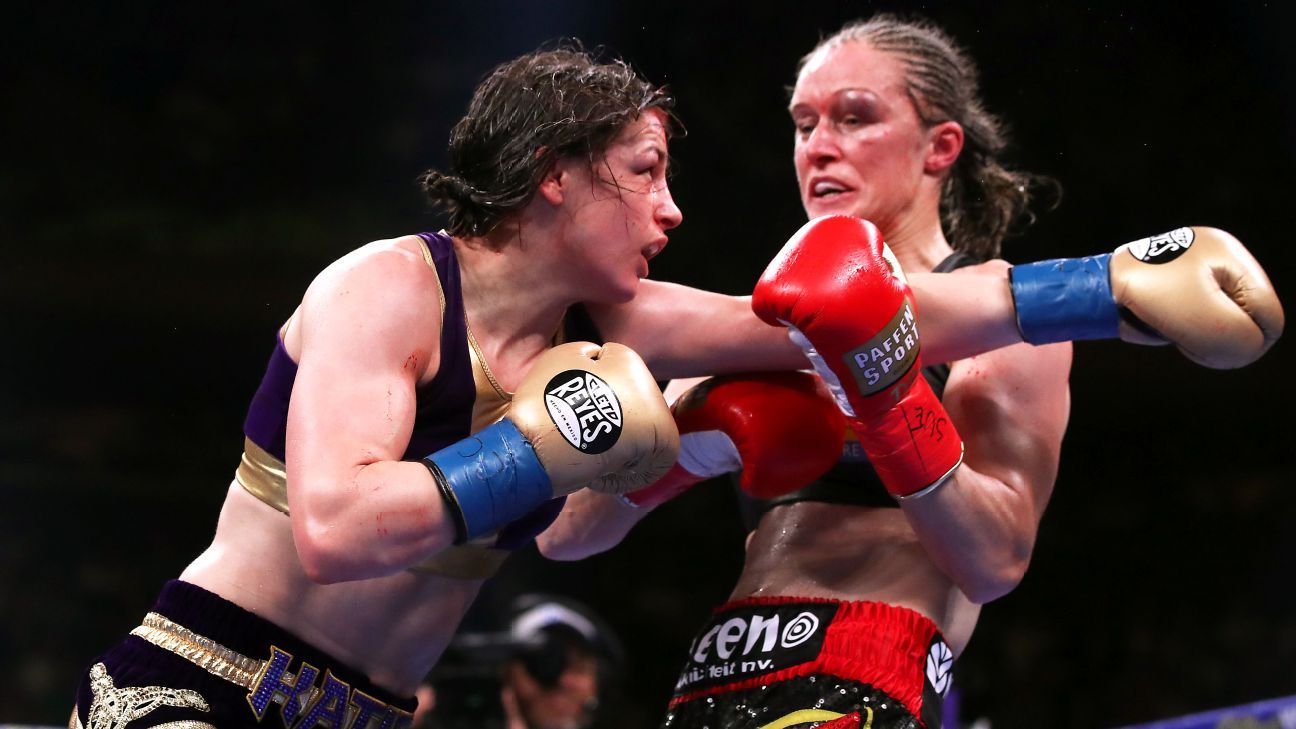 Katie Taylor and Delfine Persoon have both said they have points to prove in Saturday’s rematch to decide the undisputed world lightweight champion of women’s boxing.

For Taylor (15-0, 6 KOs), it is a chance to silence those who argue she did not deserve the majority points decision over Persoon in a close encounter to unify all major world titles in June 2019.

For Persoon (44-2, 18 KOs), it is an opportunity to correct what she felt was an injustice in the biggest fight in women’s boxing of 2019.

“The last fight was a huge fight, very close, and is deserving of a rematch and this is a fight I’ve been looking forward to since the first fight,” Taylor said at a news conference.

“It’s the biggest fight in women’s boxing right now. I want to be involved in big fights and love this challenge.

“I definitely want to win clearly, more convincingly. I’ve been training since January for a big fight, and this is what I was born for. I can’t wait to step in there and prove all the doubters wrong.”

They met last time at Madison Square Garden in New York — but Saturday’s rematch for Taylor’s WBC, WBA, IBF and WBO lightweight titles will be a crowd-less event in the garden of Matchroom’s office headquarters in Essex, England, which has been dubbed “Matchroom Square Garden” by promoter Eddie Hearn.

Taylor, 34, from Bray, Ireland, has been in Connecticut since January and after initial plans to match her against Amanda Serrano fell through, the rematch was arranged with Persoon.

Persoon, 35, has continued to combine her training with a full-time job as a police officer in her native Belgium and felt she should have got the decision in New York.

She had reigned for five years and completed nine defences until the Taylor loss. However, she still taunted Taylor for running in the first fight.

“For us she did not do enough to win the fight, she says she did enough, but we are sure we didn’t lose the fight,” Persoon said.

“There are a lot of things in the world that are not correct, I see this every day in my job, now it is time to do the rematch, I just hope this is a correct fight.

“If you want to have a good fight you have to have two boxers who go for it. I want to give a good fight. I hope this is a correct fight, with correct judges and timekeepers because the last round was 30 seconds too short last time.

“She is more technical, I am maybe more physical. I just want to give a good fight.”

Taylor was unfazed by Persoon’s comments and the 2012 Olympic gold medallist said she will stick more to her boxing this time around.

“I’m going to fight the right way for me,” she added. “It’s called boxing, not running, and it’s called a sweet science for a reason. I definitely need to be a bit more disciplined in this fight.

“For a few months I had been training for a huge fight with Serrano but that fell through and it’s great to have the rematch instead.

“Everyone is entitled to their opinion but I don’t want to leave any question marks and I want to win it a lot more convincingly this time. I’m a composed person, I don’t really take notice of what other people are saying. Regardless of what Delfine says I’m sitting here as undisputed champion, I don’t really feel the need to bite back. I’m looking forward to producing a career best performance.”

Both have boxed once since their encounter: Taylor stepped up a division to win the WBO world super-lightweight title from Christina Linarda in November while Persoon won a 10 round decision over Helen Joseph the same month.

Taylor vs. Persoon II is on the same bill as the heavyweight clash between Dillian Whyte, of England, and Russia’s Alexander Povetkin who meet to decide who fights for the WBC world heavyweight title early 2021.