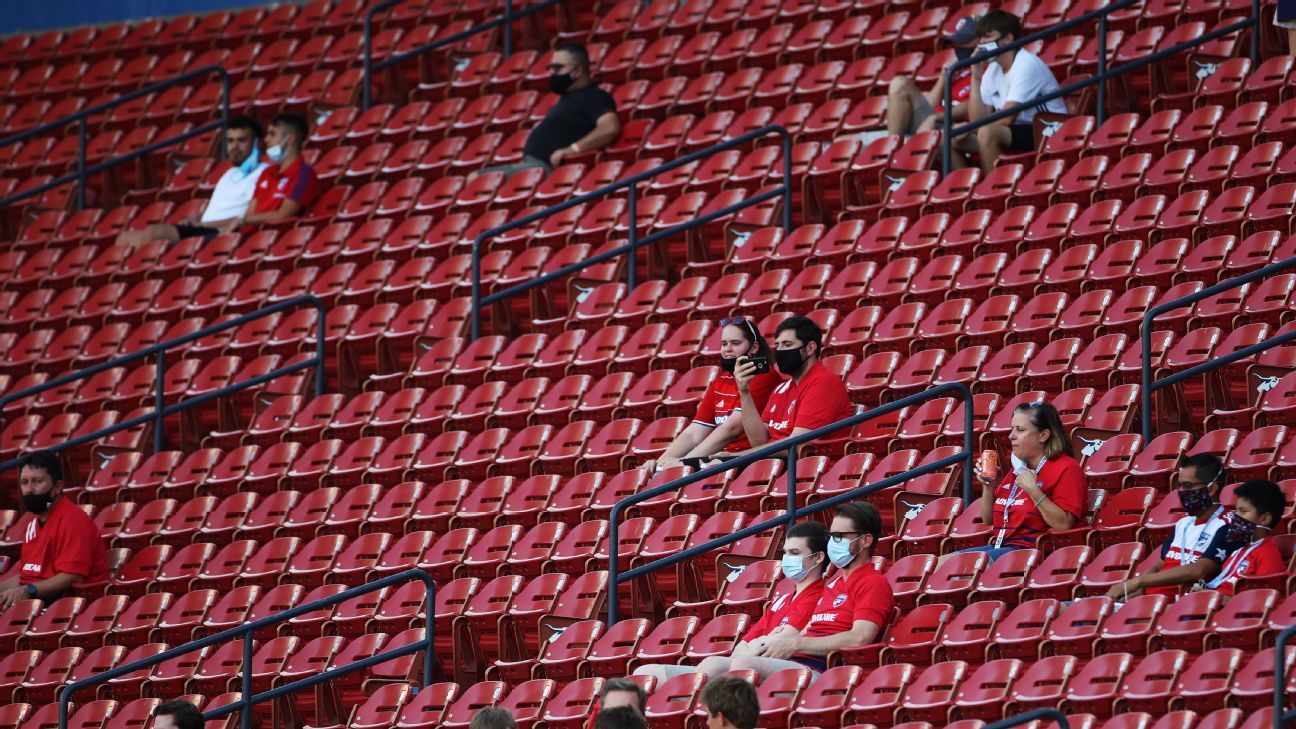 The MLS is Back Tournament concluded little more than a week ago, with the Portland Timbers crowned champions, and since then, FC Dallas and Nashville SC have met twice, and the rest of the league returns to play in home markets this week. Attention across the league now shifts from tournament play to completing a condensed, 18-game regular season. As teams prepare to play their first games outside the Orlando, Florida, bubble since March, we answer three of the most intriguing questions facing the remainder of the 2020 MLS campaign.

Why are fans in the stands?

When Dallas hosted Nashville last week, the club decided it would allow a little more than 5,000 fans inside — less than 25% of the stadium’s capacity — despite the Texas governor having made allowances for up to 50% capacity at sporting events across the state. The crowd appeared sparse, and FCD announced an attendance of 2,912.

And that raises an interesting question for the four clubs so far who’ve announced they’ll open their doors to fans (Dallas, Sporting Kansas City, Orlando City SC and Real Salt Lake). If so few supporters are going to show up, and in turn generate so little revenue for these clubs, then why run the risk of community spread of COVID-19 when the monetary reward is so meager?

On a conference call last week, Sporting KC CEO Jake Reid was asked whether the decision to open Children’s Mercy Park to fans made financial sense, considering the staffing and protocol required. “It doesn’t make a lot of sense … to be honest with you,” he said. RSL chief business officer Andy Carroll echoed that sentiment, telling ESPN: “Finances aren’t driving much of major league sports at this point.”

According to these clubs, their decision is about returning communities to some degree of normalcy. Reid said that the majority of Sporting season-ticket holders had expressed interest in attending matches in person, so long as there was a protocol to make doing so safe. It’s a similar story in Salt Lake City.

“The financial aspect of it is really not a driving force at all,” Carroll said. “It really has come down to welcoming fans back, the fans who want to come, and we do have a lot of fans who do want to come back. And the ones who want to stay home and watch it over a broadcast or streaming, we certainly appreciate that and respect their thoughts as well.”

One source in Kansas City pointed to the club’s role in developing the protocols that were successfully implemented at MLS is Back and suggested that SKC could once more play the role of pioneer as teams around the league determine how to move forward in the era of social distancing. That source also noted that such protocols — mask requirements, socially distanced seating, staggered entry and exit at gates, temperature checks and health screenings, touch-less ticketing and cashless concessions, to name a few — might be not just for the remainder of the 2020 season but the reality in 2021 as well.

MLS commissioner Don Garber said in June that this pandemic would cost the league $1 billion in revenue, citing the cash clubs generate on matchdays: “When we lose the ability to sell tickets and we lose the ability to have any hospitality and other gameday stadium revenues … today that is on hold. And we really don’t know what it’s going to look like, going forward.”

These four clubs are getting a head start on creating a blueprint for how to safely get fans in the stands, and in a league that is dependent on that, their decision does begin to make some financial sense if these stadium protocols can help soften that billion-dollar loss.

How will travel and the condensed schedule affect players?

It’s hard for the body to properly recover from a game when the next one is three or four days away, but clubs largely were able to solve that puzzle in Orlando, Florida. Now that teams are returning to play in home markets, there’s an added wrinkle to this challenge: travel.

Typically, no team travels more than the Vancouver Whitecaps. The average length of their road trip in 2019 was 2,400 kilometres (1,500 miles), while the league’s least-traveled clubs had to cover only some 1,200 km (750 miles) on average. If there’s a team prepared for the complications of long-haul flights on player recovery, it’s the Caps.

After a four-hour flight to Toronto for Tuesday’s 3-0 loss to the Reds, Vancouver will remain in Ontario for a rematch against Toronto FC on Friday before flying to Quebec to face the Montreal Impact four days later. The Whitecaps won’t return to British Columbia between those games, opting to remain to minimize the effects of cross-continental flights and get players’ bodies adjusted to Eastern time, before heading home to complete their all-Canadian first phase of the regular-season restart with three games in 11 days beginning Sept. 5.

Dehydration and blood pooling in the lower extremities are some of the complications players have to contend with when they take to the skies. So taxing are the effects of travel that Vancouver’s director of performance strategy, research and innovation, Dr. Ben Sporer, and his staff consider flights to be a load (the metric by which sports science staffs measure players’ physical exertion), like a training or weight-room session. They try to combat that with a hydration plan that includes electrolyte tablets served in-flight and a series of compression garment options and in-flight mobility exercises. The plan is not adhered to by every player in the squad.

“For those who practice it, they believe in it,” Sporer told ESPN. “They live by it now.”

The biggest factor in player recovery during such a compressed schedule while managing travel is buy-in from the coaching staff, and Sporer emphasized that Marc Dos Santos and his staff have made it a priority. Although clubs’ traveling parties have been reduced to minimize the risk of COVID-19 transmission, the Whitecaps have a larger-than-expected group of specialists whose focus is recovery.

You can bet the other 25 clubs in MLS have similar plans in mind.

Which new arrivals will make a splash in MLS?

With the international transfer market sluggish in Europe as clubs recalibrate their operating budgets, it’s little surprise that there hasn’t been much movement in MLS’ secondary transfer window thus far. That isn’t to say that the league hasn’t added some difference-makers and headline-grabbing stars since the window opened.

The show-stopping signing: Blaise Matuidi is a serial winner, whether with Paris Saint-Germain, Juventus or France. As detailed by ESPN’s Jeff Carlisle and Julien Laurens, he will bring that experience and ability to a young Inter Miami CF team that’s in dire need of both experience and ability.

There are questions about how he will fit in Diego Alonso’s midfield, though. Playing Matuidi alongside Wil Trapp and Victor Ulloa in a midfield three would allow Inter to maintain their shape but push Rodolfo Pizarro to the wing. Alonso also could alter his formation to pair Matuidi with one of Trapp or Ulloa at the base of midfield in a 4-2-3-1, keeping Pizarro free to create from a No. 10 position, but there’s little question that he’s going to be an impact player in the league. One team executive told ESPN that he expected Matuidi to be one of the best midfielders in MLS from the moment he arrives, citing the timing of the 33-year-old’s runs and his ability to pop up in the right areas, which will allow him to be a step or two ahead of defenses league-wide.

The wildcard: The deal isn’t finished, but widespread reports in Argentina suggest that Boca Juniors playmaker Emanuel Reynoso is on his way to Minnesota United FC. The 24-year-old has scored five goals and eight assists in 66 appearances with the Buenos Aires giants, but he has spent much of his career shuttling from wing to central midfield to limited minutes as a No. 10.

If he completes his move to the Twin Cities, the Loons would assuredly hand him the keys to their attack. The MLS is Back semifinalists will be taking a risk in projecting the production of such a lavish signing who has yet to establish himself as a No. 10, but one source ESPN spoke to likened Reynoso’s potential to that of Nicolas Lodeiro or Alejandro Pozuelo, the sort of upside that could place him among the league’s elite creators.

The sleeper: Pulses might not have raced when Dallas signed Andres Ricaurte on loan from Colombian outfit Independiente Medellin, but the 28-year-old gives Luchi Gonzalez lots of flexibility. He has the work rate and the grit to operate as a No. 8 but possesses the final ball that fits well as a No. 10, offering versatility in an FCD team brimming with young — but, as is often the case with developing players, inconsistent — talent.