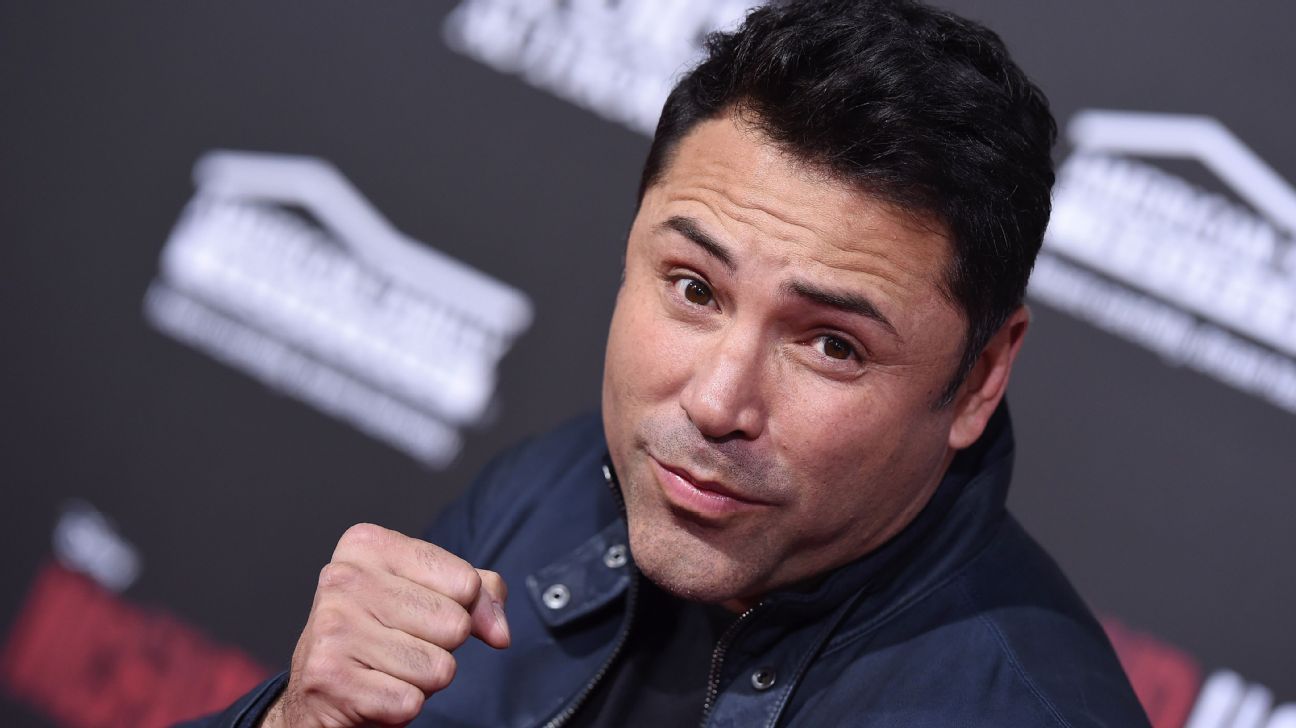 Oscar De la Hoya announced the end of his retirement Wednesday to return to competitive boxing at the age of 47, and the first question that comes to mind is: Why?

De La Hoya is an accomplished fighter, won titles in six different weight classes, captured a gold medal in the 1992 Olympics, was inducted into the International Boxing Hall of Fame in 2014, has a statue outside Staples Center and is one of the most successful promoters in boxing.

But like many other retired fighters before him — see Roy Jones Jr., Mike Tyson, Floyd Mayweather and many others — De La Hoya missed boxing and is ready for more. His last fight was a TKO loss to Manny Pacquiao in 2008.

Is it a good decision to lace up the gloves again? How good can De La Hoya be at this age? How about his legacy?

What’s your reaction to Oscar De la Hoya’s plan to return to the ring?

Kim: I’m not a fan of boxers making comebacks, especially when they are doing it well past the age of 40. To put this into perspective, when George Foreman became the oldest heavyweight champion in history after shocking Michael Moorer in 1994, he was 45. When he retired for good in 1997, Foreman was 48. This doesn’t seem like a good idea. The last time we saw De La Hoya, he looked stiff against Manny Pacquiao in a welterweight fight in 2008. But in all fairness, he had nothing left after making the weight.

As for why he’s doing it? He’s probably bored. This certainly isn’t about the money. De La Hoya has done well financially and is set for several lifetimes. But he has probably had his fill of golf for now, and wants what he’s best at. He’s a fighter. In many ways it’s not just what they do, it’s who they are.

Bradley: It is extremely surprising. I believe he’s returning because he understands that the money nowadays is beyond greater than when he reigned as a top prizefighter. Oscar has a big name in the sport as he is still relevant as a blossoming promoter. Another reason is because he sees the talent pool in his campaigning division. Fighters today lack fundamentals and have the inability to deal with speed, power. Even at the age of 47 De La Hoya still has a left hook that can put down a buffalo.

Baby: If De La Hoya is actually returning to the ring, it’s arguably a bigger joke than Mike Tyson and Roy Jones Jr. “fighting” each other. To put De La Hoya in perspective, the last time we saw him in the ring he spent a 2008 evening getting absolutely pummeled by Pacquiao. The fight turned Pacquiao into a worldwide superstar and ended De La Hoya’s storied career. This comeback has to be about pride because surely De La Hoya isn’t coming back for the money. He’s the head of his own promotional company, which happens to be one of the biggest in combat sports.

Rodriguez: I am definitely surprised. I’ve already heard that he wanted to do an exhibition fight with Julio Cesar Chavez Sr. in Tijuana, and that that could be the first of more exhibitions, but I did not expect him to return for real fights. There is always an adrenaline rush that boxers can only unload in one way, and that’s by going in the ring and fighting. I hope he does not get into the ring, but if he does, I hope it ends well for him.

How competitive do you think De La Hoya can be?

Kim: If he fought carefully handpicked opposition, and did six- or eight-round bouts, you could get him some wins. The real question is just how patient will De La Hoya be in returning? Will he engage in some tune-up bouts to test the waters (and his own body), or jump right into the deep end? The process here will be important.

He can probably defeat journeymen, and maybe even some fringe contenders, but you wonder how his body would hold up over a 12-round fight. The prudent thing to do is to get him some guys who are moving up in weight — natural welterweights — who are light punchers and bring them up in weight class. But boxing, at the upper echelon, is generally a young man’s game. His first few outings should be matched very carefully.

Bradley: He retired at a decent age, 36, and I would have to revisit his last two performances. The six-division world champion was defeated by Manny Pacquiao in 8 rounds by TKO but many knew that he was weight-drained. De La Hoya did beat a blown-up junior welterweight in Steve Forbes, and to his defense, Forbes was extremely talented and skillful. Looking back at his career, I can not really say he was brutally beaten or knocked out consecutively toward the end. Can he compete? Yes, I believe that he can because the motivation is there for a reason that only he knows and understands.

Baby: It depends on the level of competition. Against somebody whose only fights have been at charity events or inside a local multipurpose event center, De La Hoya might look like a formidable opponent. But against someone who has actually fought at a respectable level within the last five years? That won’t be pretty.

De La Hoya is 47 years old and it’s not unreasonable to think someone could fight at that age. Bernard Hopkins, his Golden Boy Promotions partner, was 51 when he entered the ring for (presumably) the last time. But both men had very different career trajectories. And let’s not forget: Hopkins was literally smacked out of the ring.

Rodriguez: He can be as competitive as he wants to be — if he does it the right way. But if he wants to come back against one of the top 10 super middleweights or middleweights in the world, there will definitely be a bad ending. It will be interesting to see if any state commission allows him to return and what type of fights they approve for him, although his return to the ring will surely generate a lot of expectations, regardless.

Kim: I’ll go with Ted Cheeseman from England, who just recently beat Sam Eggington in a solid 12-round bout at “Fight Camp.” Cheeseman has a style that will be favorable for Oscar as he won’t have to go chasing after him. And while Cheeseman brings a good skill set, he isn’t a great puncher. Again, I’m thinking as realistically as possible in terms of a first fight back for De La Hoya.

It wouldn’t be prudent to just match him with current belt holders at 154 (Jeison Rosario, Jermell Charlo and Patrick Teixeira) — or realistic. And for any of these fights to have any credibility, Oscar should demonstrate that he can still operate effectively inside the ring against a certain level of opponent.

Bradley: If you’re going to do sometime like this it has to be worth it. Gennadiy Golovkin is dangerous but is on the way out as his age and father time is catching up with him. I wouldn’t mind seeing a battle with Jermall Charlo down in Texas or a boxing fight with MMA star Conor McGregor.

Baby: What about Ricardo Mayorga? He fought as recently as last year — a loss to Lester Martinez, who was making his pro debut. Mayorga was the last opponent De La Hoya stopped (in 2006). Or what about Julio Cesar Chavez Jr.? De La Hoya certainly wouldn’t be in any sort of trouble against Chavez Jr. He’d probably quit after a couple of rounds anyways.

Rodriguez: It will depend on his main goal, but there are a few names. Antonio Margarito could be a very interesting opponent if he wants to make a comeback. Miguel Cotto, Juan Manuel Marquez or Shane Mosley could be good opponents, if they dare to return. James Kirkland could be another option, and maybe even former middleweight champion Sergio “Maravilla” Martinez, who’s making his own comeback on Saturday.

How will this return impact his legacy?

Kim: It really won’t — he’s already a Hall of Famer. What takes place from here on out can’t diminish what he’s already accomplished inside the ring. Just think about it: Do Michael Jordan’s two seasons as a Washington Wizard tarnish anything in his career?

De La Hoya might end up embarrassing and hurting himself; that’s the risk he’s taking. But his historical standing in the game isn’t at any risk.

Bradley: Yes, but only if he gets knocked out or brutally beaten and embarrassed. Personally, I retired after facing one of the best names in the history of the sport in Pacquiao. Same for Oscar. It would be a shame if there is anything less than that man on Oscar’s résumé as his last defeat.

Baby: This will have zero bearing on De La Hoya’s legacy. He won a gold medal at the 1992 Olympics, had an illustrious boxing career that already put him in Canastota, has a statue outside of Staples Center and showed fighters how to leverage their personal brand into a promotional company. His legacy is cemented.

Rodriguez: His legacy won’t be erased by anyone or anything. De La Hoya was a great fighter, he won a gold medal, became the first fighter to be champion in six different weight classes and got into the Hall of Fame. So, no, nothing can erase his legacy. But it must be noted that Oscar is currently a prominent boxing promoter and no one wants to see him fighting in the ring out of shape or against no-name opponents who can run over him.

What’s your take on retired fighters getting back in the ring after a long time away?