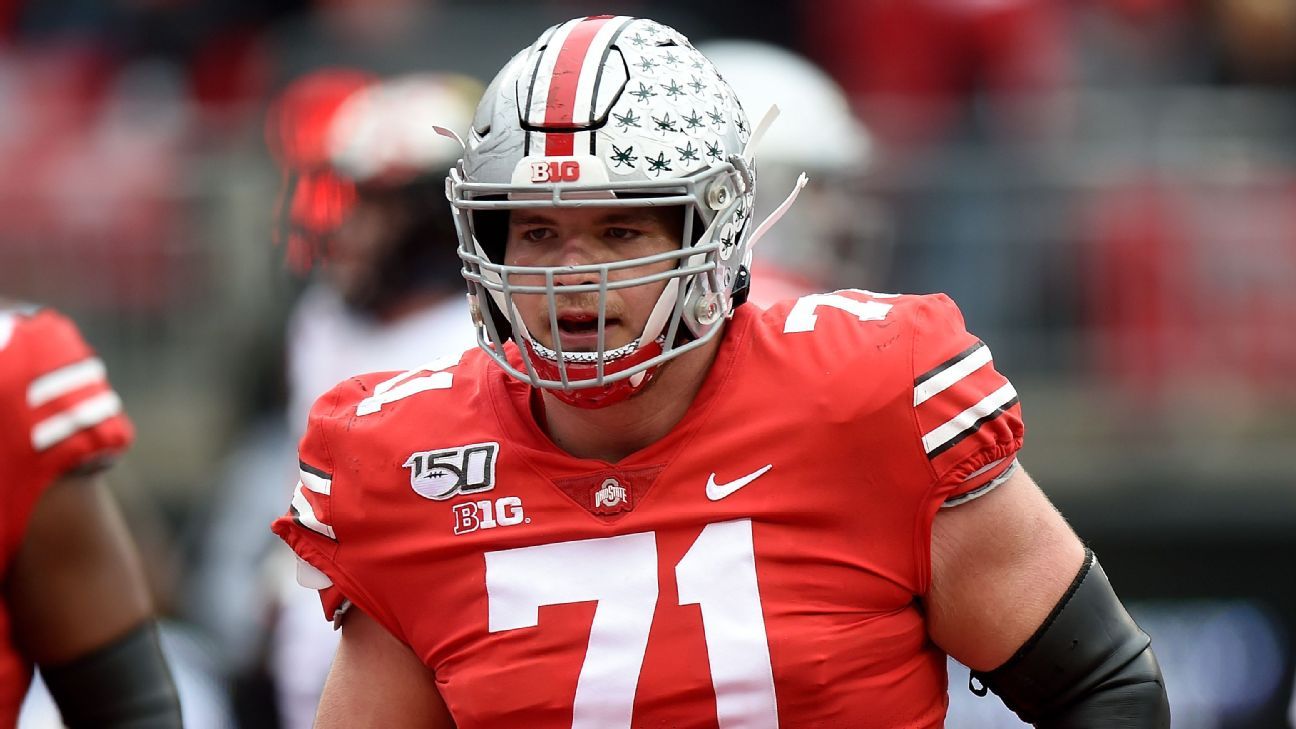 The days run together now, one bleeding into the next and into the next, making it impossible to remember much of anything. The important details, those stick. Ohio State center Josh Myers remembers the message players received last Tuesday. Coach Ryan Day called a team meeting. Not a virtual meeting, mind you. An actual team meeting, inside their indoor football facility.

When Myers and his teammates walked in, they saw plastic chairs spaced more than six feet apart. Everyone wore a mask. The players had no illusions about what they were about to hear, even if Myers held on to some hope that maybe, just maybe, Big Ten presidents and chancellors and administrators would float them a last-second Hail Mary.

Myers sat, crestfallen. Not one player said a word. Smith continued, telling the players he fought for them to have a fall season, that he tried his hardest, that he simply could not get it done. Smith then left to meet with the other fall sports athletes. Day stepped up next. He apologized, too. He told his players how proud he was of them, that he loved them, that he would do everything he could to get them ready for a spring season.

“It’s really hard when you’re inside the walls of the facility and you can see what goes on behind the scenes every day, and how much work is put forth,” Myers says now. “It felt like the biggest loss I’ve ever taken. It felt like losing a game — but it was a season of games.”

A few hours later, thousands of miles from the Ohio State campus, Oregon State linebacker Hamilcar Rashed Jr. sat alone in his room. Since January, he worked out multiple times per day, mostly on his own, aiming to build off a breakout junior season that would solidify him as not only one of the best linebackers in college football but further boost his NFL draft hopes.

The Pac-12 would not have a fall sports season, either.

“I was heartbroken,” Rashed said. “We don’t know what to do. We’d be deep in fall camp right now, and it’s me sitting here around my house or trying to go work out in the morning and that’s it. It’s difficult. At this time last year, I really was working my butt off to have the season that I wanted to.”

Over the past 10 days, players in the Big Ten, Pac-12, Mountain West and MAC have had to grapple with a lost fall season and the impending fallout. For seniors and draft-eligible juniors especially, the pain, heartbreak, confusion, anger and uncertainty feel particularly intense.

Will they ever put on their college uniforms again?

‘This isn’t going to change who we are’

Since the sports world effectively shut down in March, coaches and administrators across the country asked college football players to do the same thing, for months and months: Keep working out wherever you are, attend online classes, wear a mask, social distance, wash hands and avoid large gatherings. They did team meetings online. They talked to their teammates in group texts rather than next to one another on a practice field. Some woke up before dawn to use closed-off parks and fields, praying they would not get caught and kicked out. Others made do with what they had around the house, subbing backpacks filled with books for actual weights. Those sacrifices, they were told, would get them a football season.

“You went months without seeing anybody, without socializing, always wearing a mask, sanitizing,” Michigan defensive back Hunter Reynolds said. “You saw how much players love the sport because there was so much effort made to keep our bodies in peak physical shape and be ready when the season came — even though we weren’t around the facility like we were for our entire college careers.”

When they returned to campus over the summer, spirits lifted. They rose even higher in the Big Ten and Pac-12 when the conferences announced revised conference-only schedules. “Everyone was like, ‘We’re optimistic for a season. We might have one,'” Minnesota defensive back Benjamin St-Juste said. “We were pretty happy. Energy was pretty high.”

But that did not last long. Especially after the MAC became the first FBS conference to postpone the fall sports season. Speculation followed the Big Ten and Pac-12 would be next.

“It was just like, ‘This can’t be real,'” Western Michigan linebacker Treshaun Hayward said. “It’s just … we can’t be the first conference to cancel.”

Coach Tim Lester gave players the information to join the Zoom call with MAC commissioner Jon Steinbrecher, so they could hear all the reasons behind the decision. Western Michigan center Mike Caliendo described the team as “down in the dumps” when they first heard the news, but he felt clarity after listening to Steinbrecher. “I sat back and was like, ‘Well that makes sense.’ It’s bigger than football.”

Shortly afterward, Caliendo sent a text message to the seniors asking if anybody wanted to get together for lunch. About eight of them met up for Detroit-style pizza, where they put everything on the table. Should they stick it out if there is a spring season? What if there is no season at all, do they wait a full year for the fall?

At Northern Illinois, offensive lineman Brayden Patton put his own disappointment at a delayed senior season into perspective. He knows several friends who have lost family members to the coronavirus, making the safety issue a much more stark reality.

“It’s hard for me to say that I would be safe playing,” Patton said. “We don’t know anything about it, and if you do get it, a lot of people have been having a tough time with it. So I would say my thing about it is I’m most concerned about not getting the virus and trying to do everything that I can to be safe and not give it to my friends or my family or my teammates.”

Weighing all their options

Rashed looks through his camera roll, scrolling all the way back to August 2019. He stares at the photos. Oregon State was three weeks into camp. Now, there is no football, and he knows he has to make a decision. Patton, Hayward and Caliendo said they want to play a spring season, if there is one.

The decision is not so definitive for Rashed. He knows how one year changed Joe Burrow’s life, from possibly undrafted to No. 1 overall pick. But he’s also going to be 23 next year, older than most NFL rookies. He feels he has enough on game tape. Mel Kiper Jr. lists him as the No. 4 outside linebacker for the 2021 draft. But he also wanted to use his senior season to prove what he did in 2019, when he school records for sacks (14) and tackles for loss (22.5), was not a fluke.

Rashed says he feels like he has time to make a decision, but he also feels rushed. The push-pull, going around in circles about what to do, playing all the scenarios out, he does that constantly. Earlier this week, he went to Applebee’s with teammate Andrzej Hughes-Murray, who sat out last season with a foot injury. They looked forward to playing next to each other again all year. Murray looked at Rashed and said, “The part that really hurts is I may not get to play with you again.”

“All the people I came here with, it’s like, ‘Dang, I don’t know if I’ll be able to put the pads on with you again, have fall camp with you again,” Rashed said. “All those little details people miss, team meetings and team bonding, just little things like that, being at camp, laughing at each other even when we’re tired. Those little things add up.”

Myers has a decision to make, too. He could have left last season for the NFL draft, but he decided to return to try to win a national championship. Teammate Justin Fields has started an online petition to play the fall season, and Myers gladly signed it. But for right now, there is no indication the Big Ten will change its mind. Kiper rates Myers as the No. 3 center available for the 2021 draft, and like Fields, is one of many Ohio State players expected to be drafted if they opt out.

“This is probably the most talented team I’ve ever been a part of. All of us had our eyes set on the national championship and of course hopefully a rematch with Clemson. The last couple days I put my phone down and didn’t even look at it. I needed to take some time to step back and clear my thoughts and not try to get too angry. There’s a chance our team doesn’t look the same. I think it’s too early to say right now for sure what our team will look like in the spring/winter whenever we’ll play. There’s just a lot of things that have to happen between now and then.”

There remains lingering frustration over what players view as the hands-off role the NCAA has taken in making decisions, especially as the Big 12, SEC and ACC move forward and attempt to play a season.

“It definitely felt like they assumed that if they weren’t the ones making the decisions, then some of the onus and blame and pressure would have been taken off them. But when you’re a leader, when you’re a head coach, if the game goes right it’s on you, if the game goes wrong it’s on you. So being able to take that ownership of either making the right decision or wrong decision, that’s something the NCAA needs to do in a situation like this.”

No decision is the perfect decision

Alabama coach Nick Saban joins Get Up to address the sacrifices players and the coaching staff have been making to ensure they play football this year.

Reynolds and St-Juste spearheaded the Big Ten United proposal as co-founders of College Athlete Unity. They continue to point out that administrators had months to craft a plan to play in the fall, specifically related to testing protocols, and failed to put uniform guidelines in place for preseason practices and workouts.

For example, Myers said Ohio State players have been tested twice weekly. Reynolds said he has been tested at least six times at Michigan. But Reynolds also said players he talked to at other Big Ten schools had been tested only once or twice.

“It made me proud that we stood up for something together as student-athletes and asked for a plan because we saw there was no plan,” St-Juste said. “There was no correct plan. It was not safe.”

Players want to be involved in any discussion about a spring season. They remain unsure whether that will happen, because of uncertainties about the virus and future testing protocols.

That is why they continue to seek open communication with those making the decisions.

But before moving forward with any plan, they want more clarity and transparency about why the Big Ten decided it simply was not safe to have a fall season. Those lingering questions have only ratcheted up emotions, from parents and players alike, as half of the college football world moves on without them.

A few weekends ago, Myers drove around Columbus running errands. He passed a baseball park, filled with little kids playing. The parking lot was full.

That image keeps coming back to him, hard to forget now. If only he could put on a uniform and get out on a field with his own teammates to play a little pitch and catch.