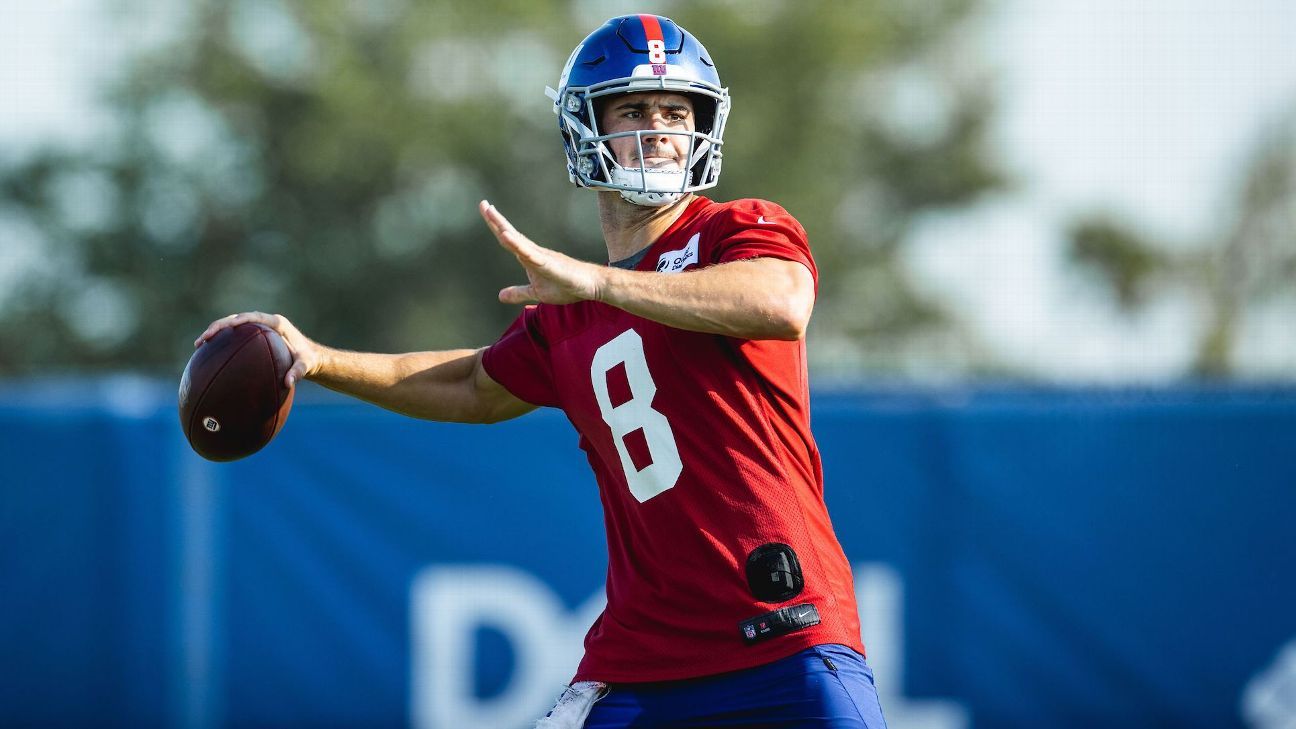 Daniel Jones 2.0 is coming soon to a stadium near you. He is bigger, he’s stronger and all signs point to him being better than ever in his second professional season as the New York Giants‘ quarterback.

This is all music to the Giants’ ears. Jones at his best is what the team needs to shake the funk that has resulted in six losing seasons in the past seven.

Jones, 23, had a promising rookie season, throwing for 3,027 yards with 24 touchdown passes in 12 starts. But the Giants need more. His league-leading 18 fumbles (11 lost) and rookie mistakes must be reduced. They need Jones to transition from a serviceable starter to an upper-echelon winner.

It’s why Jones went to work this offseason despite some limitations because of the coronavirus pandemic, adding muscle and working on the deficiencies in his game.

“Obviously, he’s a guy that during the pandemic, he didn’t take time off,” Giants’ first-year coach Joe Judge said. “He really used it to his advantage for whatever he could do.”

Jones’ physical transformation is noticeable, even from a photo from one of the Giants’ first workouts this summer. Nobody will confuse Jones with running back Saquon Barkley, but in the image, Jones is frozen in his follow-through with his left leg locked and there is a Saquon-esque bulging quad that is impossible to ignore.

This is the new 229-pound Daniel Jones, up from his playing weight of about 220 pounds last season. It’s lean body mass the 6-foot-5 Jones, stronger and faster than before, carries with ease.

“Aesthetically, you can see it,” said Jason Benguche, the director of performance at Jet Performance Labs, who trained Jones for 10 weeks during the pandemic. “His legs certainly got bigger, stronger. And at the same time he got faster and more explosive.”

“He’s chiseled up. He’s put good definition on his body,” said Anthony Boone, a mentor from QB Country North Carolina, who worked with Jones this spring.

Boone later added: “I think he’s going to shock the league and be huge for the Giants this year.”

It won’t come without a price. In this case, Jones paid it in sweat equity.

The work began a few weeks after the 2019 season ended. Jones trained with his personal quarterback coach David Morris and then his former college coach David Cutcliffe. Jones even brought some of his Giants teammates to Duke University for workouts days after Super Bowl LIV in Miami.

This was just the beginning. Jones spent time working with QB Country New Jersey’s Mickey Brueckner and throwing to some teammates, including receiver Sterling Shepard and Barkley, before everything came to a screeching halt.

But not even the pandemic was going to slow down the No. 6 overall pick from 2019. Jones pivoted and went to work at home in Charlotte, North Carolina, when the country went into lockdown. A starting quarterback making a seven-figure salary went back to living in his childhood home and trained with the same intensity he did while trying to become a high school starter. He hit the weights there until pandemic restrictions loosened enough for him to move elsewhere.

That’s when Jones teamed with Benguche, the former Carolina Panthers assistant strength and conditioning coach. It was a connection made through recently retired All-Pro linebacker Luke Kuechly, who was still working out at the time with former Panthers tight end Greg Olsen, who is now with the Seattle Seahawks. Jones knows Kuechly through their shared agents at CAA.

“I feel good. I feel like I’m as strong as I’ve been,” Jones said. “I feel like I’m in good shape. I was in Charlotte for most of the offseason and training there. I wanted to get stronger and wanted to gain some weight for what that does for every part of my game — standing in the pocket, running when I need to, and obviously throwing the ball as efficiently as I can using my strength, my lower body. Each piece of that was part of the goal of the offseason in my training.”

Jones simultaneously trained with Boone, Morris’ co-worker at QB Country, in Charlotte to fine-tune his quarterbacking skills and fundamentals.

In particular, they went to work on fixing Jones’ Achilles’ heel — fumbles. It’s not an issue that appeared out of the blue. His 13 fumbles lost as a starter at Duke from 2016-18 were second-most in the FBS to former USC and current New York Jets quarterback Sam Darnold (14), according to ESPN Stats & Information.

So, when Jones was throwing, Boone would be poking at the ball, ripping at his wrist, trying to wrestle the ball away. Anything to simulate a 6-foot-6, 300-pound defender with a 7-foot wingspan.

This was at Jones’ request, and it never seemed to be enough. He wanted more. 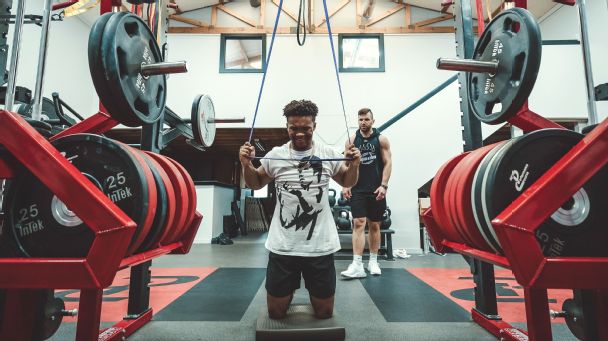 Get to know the sophomore quarterbacks before the 2020 season kicks off.
&• NFL execs rank them from 1-5 »
&• How Kyler Murray improved in Year 2 »
&• Broncos get the real Drew Lock »
&• How the Jags see Gardner Minshew »

“Hey, can we do the same movement and you just put your hands up and get in my face?” Jones would ask Boone. “Or just bump me a little bit? Or just throw something at my legs? Go kind of low. Don’t let me step into my throw. Kind of grab my knee before I can stride and make me use my hips.”

It was this little stuff that made these workouts different from anything Jones had done in the past. He was aware of the deficiency and wanted to make sure he improved.

“Obviously, that was a big focal point for us throughout a lot of drills,” Boone said.

Jones was working on the field up to four days a week, mostly with a group that included fellow quarterbacks P.J. Walker (with the Panthers now) and Quentin Harris and receivers Maurice Harris (formerly of the Saints), the XFL’s Sam Mobley, Jones’ high school teammate Melvin Rouse and recent South Carolina transfer Jalen Brooks. That completed the makeshift camp, which was intentionally kept small for safety purposes during the pandemic.

Jones was also in the gym up to four days a week with a selective group that regularly included Olsen and Buffalo Bills linebacker A.J. Klein. Kuechly was only there the first few weeks.

It was an offseason that didn’t include much “off” time for the young quarterback, who held players-only throwing sessions in Austin, Texas, when travel restrictions loosened in the spring. It was the indefatigable Jones, a blossoming team leader, who spearheaded the makeshift throwing camps, a source told ESPN.

Jones did this all the while attending virtual meetings with the Giants and absorbing offensive coordinator Jason Garrett’s playbook.

“The thing that really jumps out is the approach that he takes every day,” said Garrett, the former Dallas Cowboys coach. “Like I said, he’s a ball guy. He loves ball. He works very hard at it, and he’s always trying to refine his skills. He’s always trying to gain more knowledge and find a way to become a better quarterback, individually and for our team. That’s what you get most excited about.”

When Jones got the Giants’ playbook in mid-April, he began incorporating it into his workouts. It became part of his routine to call out formations and plays, pretend to break the huddle, go to the line, look through his progressions and call out the middle linebacker.

The thinking was this would help with the transition during the virtual offseason. Morris would help draw up the daily script by recalling installs, simulating plays and talking through concepts. Anything they could think of to produce the slightest advantage.

“Daniel Jones is a freaking grinder. He loves the grind,” said Boone, who has worked with Jones since the mentee arrived at Duke. “He was constantly kind of on my ass about, ‘Hey, let’s get into this. Let’s do this and do that.’ I was like, ‘Maybe let’s take a break today.’ He would be like, ‘Nah, I’m good. Let’s go!’

“I was like, ‘All right, you know your body. I’m going to listen to you. If you want to work, I’ll provide it for you. But let’s be smart about how we do it.’ “

Benguche was equally conservative about working Jones’ upper body. They attacked the legs, but Benguche knows it’s imperative to be cautious with a quarterback’s arm. Some quarterbacks barely even touch weights for their upper body.

“Impressed to say the least,” Benguche said. “It’s really just his work ethic. I can see that in him in terms of how he really lives, even his individual work ethic, he lives that kind of field general-type mentality. Every day he showed up, was ready to rock and there was no challenge he was not up for taking on.

“Never a bad day, really. Couple days he was tired. Everybody gets there, but you would never really know it.”

It was all done with a purpose. The added strength should allow Jones to have more confidence to hang in the pocket. It should help with holding the ball and shedding pass-rushers. It might even add a little extra zip to his throws.

There is a belief the fumbling can be rectified. ESPN analyst and former NFL quarterback Dan Orlovsky said it’s something he saw with a young Matthew Stafford, his former teammate in Detroit. Stafford, who has started 149 games for the Lions, had some struggles with ball security, then made it a point of emphasis and added muscle and weight — like Jones did this summer. After fumbling a career-high 12 times in 2013, Stafford fumbled 15 times over the next three seasons.

The debate among evaluators seems to be whether pocket presence is innate or can be learned. Orlovsky believes Jones’ pocket presence should improve, even if it’s only slightly. Being in his second season with the game slowing down, and becoming more familiar with coverages should eliminate some of Jones’ sloppy mistakes.

So, Jones won’t be a rookie anymore, but will that be enough?

“Did I get a little bit better at it? Sure. A little bit, but it was always a weakness of my game. It was always something that held me back,” Orlovsky said this offseason. “Do I think he can improve on it? Yes. He will get more comfortable in the pocket, yes. He will work at it.

“But do I think he is ever going to be someone in the pocket like a Big Ben [Roethlisberger], who has been amazing at it or Tom [Brady]? That’s hard for me to sit here and pound the table and say absolutely that is who he will become,” Orlovsky said.

It doesn’t mean they’re not going to try. Continuing to work on eliminating the fumbles was always going to be an emphasis this summer, not just for Jones but the entire Giants team. Judge said he would be investing significant time and resources at every practice on ball-security drills. It didn’t matter that 2020 wasn’t going to be a normal training camp.

“You can’t emphasize anything unless you’re dedicating resources to it,” Judge said. “In football practice, your resource is time.”

Fixing the fumbling was a priority for Jones, too. It’s why he dedicated his most valuable resource this offseason to make sure he came back better.