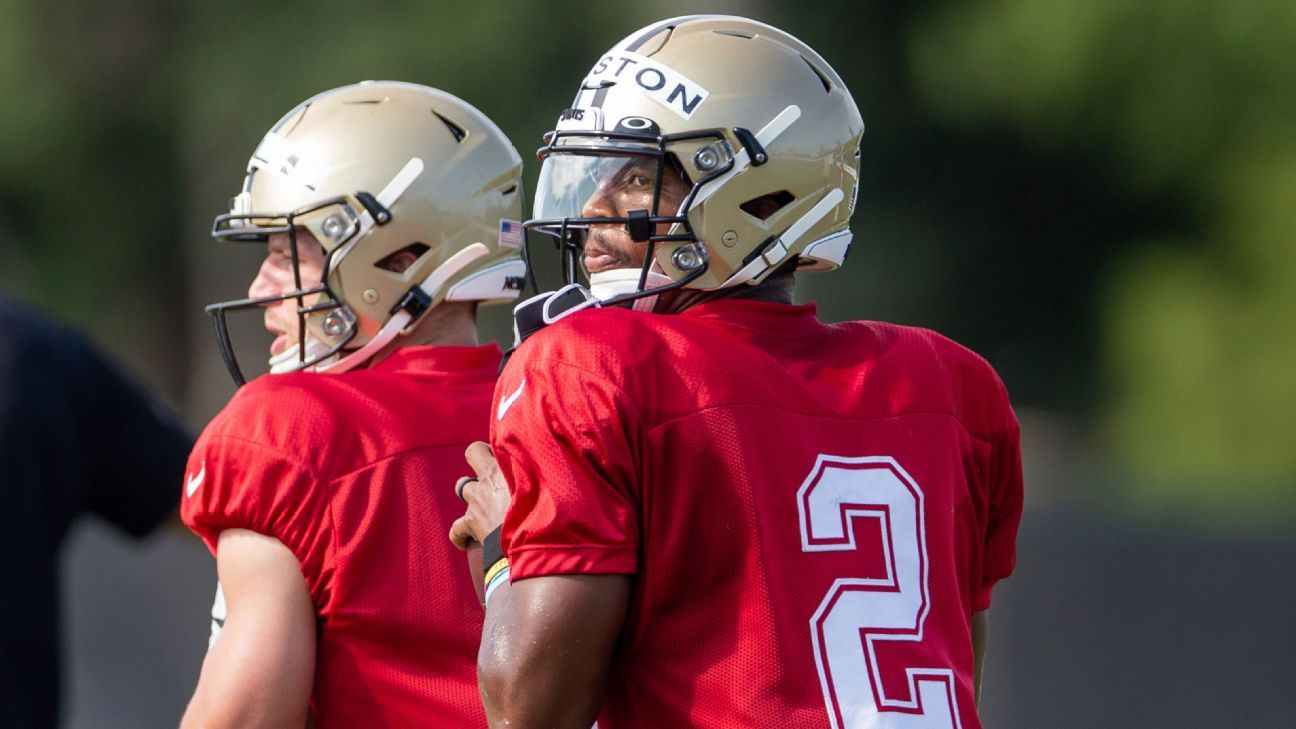 METAIRIE, La. — We finally got our first glimpse of the 2020 New Orleans Saints on the practice field Monday. And as compelling as it was to see newcomers such as wide receiver Emmanuel Sanders, center Cesar Ruiz and linebacker Zack Baun in action, nothing stood out more than the NFL’s most fascinating trio of quarterbacks:

In one drill, Brees and Winston even lined up side by side, took their snaps, dropped back and threw in lockstep. But perhaps the biggest highlight of all came after practice, when Brees inadvertently referred to his backups as “Tay-meis.”

Although Brees laughed and apologized for the slip of the tongue, he might have just stumbled upon the next great New Orleans T-shirt slogan.

As for which half of “Tay-meis” is winning the battle to back up Brees in 2020 or succeed him for the long-term future, obviously it’s far too early to reach any conclusions. Winston got to work with the second-string offense on Monday, though that’s something that could rotate throughout camp.

Winston did have one pass intercepted when it bounced off the hands of rookie receiver Juwan Johnson during the Saints’ only set of full-team drills during an abbreviated, 90-minute practice session Monday. However, Winston’s big arm was hard to miss throughout team and individual drills. And Brees and coach Sean Payton have praised him quite a bit so far — both for his talent and his enthusiasm.

“I’ve been impressed with Jameis,” said Brees, who called him a “joy to be around” and said they traded a lot of text messages and phone calls during the offseason, comparing notes about what they had seen from each other as NFC South rivals during Winston’s five years with the Tampa Bay Buccaneers.

“He loves football, he loves the game, he loves to compete. Great personality, very likable guy, he wants to learn,” Brees said. “So, man, all those things are the first components that you kind of see and recognize.”

Payton and the Saints have always been sincere when it comes to their effusive praise for Hill and their belief that he could potentially become a starting NFL quarterback after Brees retires. But for 2020, the Saints are determined to keep using Hill as a passer/runner/receiver/tight end, since he is so valuable in that versatile role.

So if Winston proves to be a quick study in this offense, there is a good chance he could be the Saints’ No. 2 quarterback behind Brees on game days, like Teddy Bridgewater was last year.

Here are some of the other questions surrounding the Saints during training camp — and the early hints we gathered during Monday’s practice:

Where will Cesar Ruiz and Erik McCoy line up?

Ruiz, the Saints’ first-round draft pick, was a standout center during his career at Michigan. But he was lined up at right guard during the Saints’ first padded practice Monday, while McCoy remained at center after starting all 16 games there as a rookie in 2019.

Payton said they will rotate during training camp, however, so coaches can evaluate the best fit. At the very least, the Saints like to cross-train players so they can play multiple positions in a pinch.

“Probably every second or third day, we’ll evaluate flipping them around,” Payton said. “Obviously, all those reps are important, and I think overall [Ruiz] is a pretty quick study.”

Payton stressed during the draft that one of the reasons the Saints valued Ruiz so much was they felt like he could adapt quickly and line up as a starter right away despite not having a traditional offseason. So far, Payton and Brees say that has proved to be the case.

“He comes across as a really sharp, smart football player — a guy that is not fazed by the speed or the strength on the other side of the ball,” Brees said. “He’s got a great skill set. And listen, coming from the Big Ten, you see a lot of O-linemen come out of the Big Ten, they’ve had to play against some pretty stiff competition. So I sense a level of maturity from him, and he’s not afraid of the challenge, not afraid to work.”

How much can rookie Zack Baun contribute?

The Saints’ third-round draft pick, Baun might be facing a steeper learning curve, since he is moving to a 4-3 linebacker position after primarily serving as an edge rusher at Wisconsin. But it looked like the Saints were throwing him into the fire during his first padded practice. Baun spent a lot of time at the strongside linebacker position with the first-string defense, lining up both in space and on the line.

Baun is getting a head start in the battle for that starting strongside job since newly signed veteran Nigel Bradham arrived last week and because returning veteran Kiko Alonso is sidelined after tearing his ACL in January.

“[Baun] has stepped in, and he had a good practice today,” Payton said. “Obviously, there’s a learning curve, but I think he’s handled it so far pretty cleanly.”

Matthew Berry and Field Yates discuss who has the better chance to emerge as a fantasy relevant Jared Cook or Emmanuel Sanders.

How quickly can Brees and Emmanuel Sanders develop a rhythm?

No real highlights came from this duo on Day 1. But Brees attempted only a handful of passes during the only set of full-team drills. Sanders looked smooth in individual passing drills. And no one is doubting the ability of these two proven vets to get on the same page quickly — especially after Brees flew to Denver this summer so they could spend two days working together and getting to know each other.

“Every day, he’s coming to work with energy, like nobody’s gonna outwork him,” Sanders said of Brees. “He reminds me a lot of Peyton [Manning]. There’s a reason why those guys are great. They work their butt off, and it’s not just from a physical standpoint, but from a mental standpoint, as well. They’re sharp, and they’re on their toes about everything.”

The health of defensive end Davenport and defensive tackle Rankins might be the biggest X factor on the entire roster. Both of New Orleans’ former first-round draft picks have flashed enormous potential. But their young careers have also been derailed by injuries.

It was a little surprising the Saints didn’t make any high-profile additions to their pass rush this offseason (and maybe it’s still not out of the question with some enticing edge rushers still lingering on the open market). But so far, Davenport and Rankins appear to be healthy and moving around well. If both can stay healthy and reach their ceiling, the Saints should have one of the NFL’s best D-lines. If not, depth could be problem.

Davenport had six sacks in 13 games last year before landing on injured reserve with a foot injury. But he said it “wasn’t good enough — not even close.”

“Shoot, I’m trying to be better than Cam,” Davenport said of teammate Cameron Jordan. “Obviously, he’s one of the best, so I think that’s a good goal to model.”

What happened to Brees’ hair?

The 41-year-old Brees was sporting a new look during his 20th training camp — a close-shaved head. Brees said the style has two advantages.

“Especially when I’m losing hair up top, I might as well just cut it off,” Brees cracked. “But when it’s a thousand degrees outside, too, it cools things off a bit.”