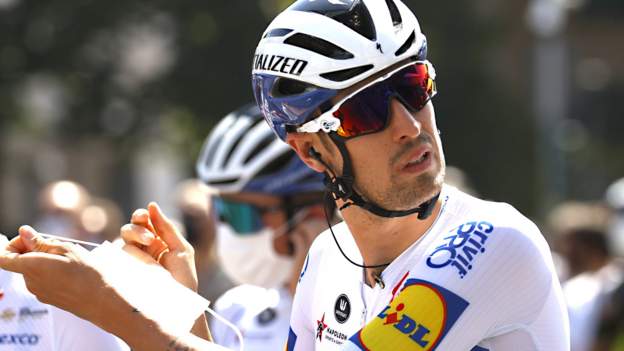 Italy’s Mattia Cattaneo became the fourth Deceuninck-Quick Step rider to suffer a major accident in two weeks as he crashed at the Giro dell’Emilia.

Cattaneo, 29, has a fractured vertebra but will not need surgery and must rest for six to eight weeks.

Team-mate Fabio Jakobsen was badly injured in a crash at the Tour of Poland, while Remco Evenepoel fractured his pelvis in Il Lombardia on Saturday.

Yves Lampaert broke his clavicle in a crash at Milano-Torino.

Dutch sprinter Jakobsen will undergo multiple facial surgeries after a high speed crash on 5 August, while Evenepoel is not expected to need surgery despite somersaulting off his bike into a ravine after hitting a bridge at the weekend.

“I knew the downhill, as I did the race several times, but unfortunately I hit a small stone in the middle of the road with my front wheel,” Cattaneo said.

“It makes me sad, because I was confident for the upcoming races.”

Russia’s Aleksandr Vlasov claimed victory in the race in Italy.