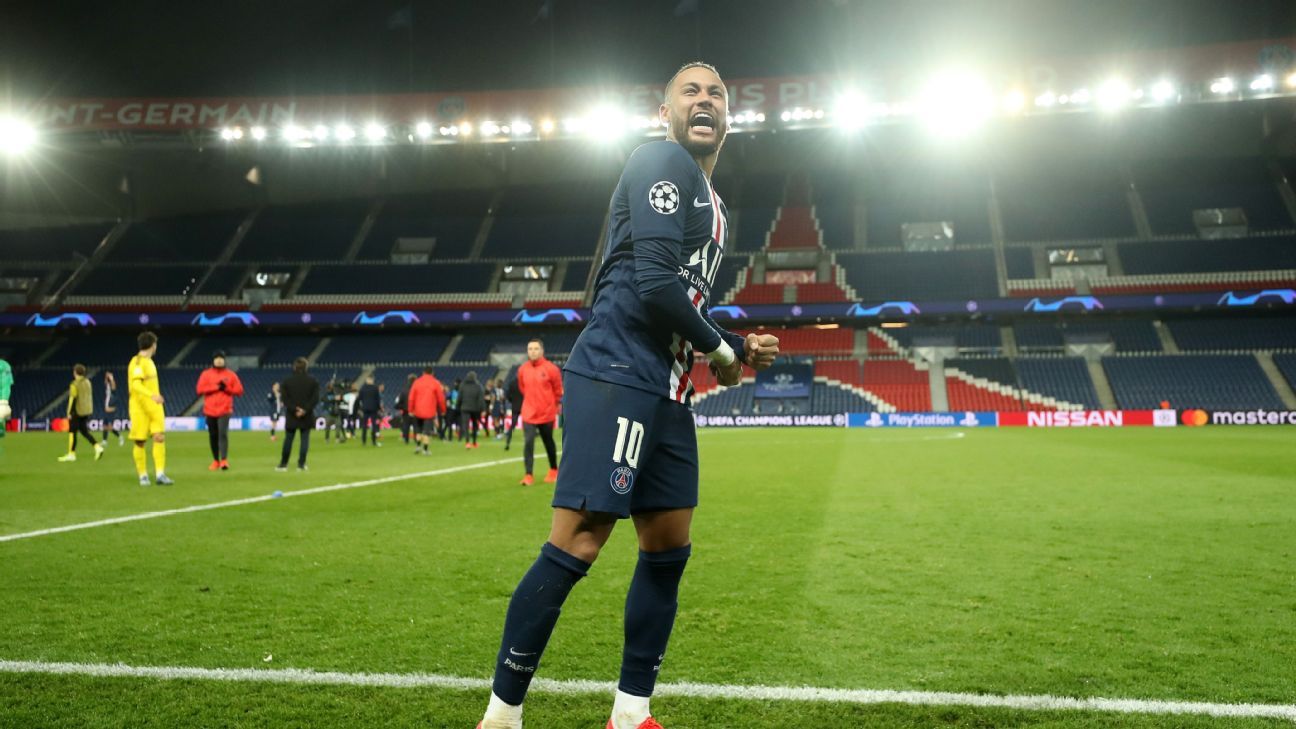 This past Wednesday was declared “Ney Day” in Brazil, with many clubs and prominent people in football across the country taking to social media to express their support for Paris Saint-Germain forward Neymar as he went into the Champions League quarterfinal tie against Atalanta.

PSG reached the semifinals of the competition for the first time in 25 years with a 2-1 win, but it was a close-run thing. Before their late comeback, they were five minutes from another frustrating elimination. Had that happened, even in the land of Neymar’s birth, critics would have been sharpening their knives. Brazil can be very cruel to its idols, and Neymar is an extraordinarily divisive figure.

In the buildup to Wednesday’s game, Neymar made his own post on social media. He had touched up his Mohican haircut, had prepared a special pair of sunglasses and was loading up his sound system — all making clear that he was preparing for a party. This kind of dialogue delights some but irritates others. Neymar communicates very well with his own demographic and very badly with everyone else.

He is now 28, but at the very highest level of the game, that means he’s closer to the end of his career than the beginning. He has been a Brazil international for a decade, and yet he can still be seen as a petulant, overindulged and underachieving adolescent.

It’s easy, yes, but also unfair. It’s true that Neymar can be his own worst enemy. It is his own fault that his diving became a global joke during the last World Cup. He is a player who has been hothoused. Rather than coming up through the rough and tumble of informal street football, where the slightly built skillful type of player has to learn how to protect himself, he grew through an organised version of the game where the protection was always provided by the referee. Today, if a referee’s criteria for fouls does not match his own, he can easily become frustrated.

There’s clearly much more to him than his showbiz profile. It is striking how much he is liked by many of his teammates, who admire him for his talent and maybe for his lifestyle, but also for his work ethic and his generally easygoing manner. It is harsh to label him as an underachiever or, as some have argued, a figure who costs his teams titles. He was certainly a valued member of the Barcelona side that won almost everything available to them in 2015, but his €222m departure to PSG two years later has undeniably been a factor in the Spanish club’s decline since.

On the international front, only two players, Pele (77) and Ronaldo (62), have scored more goals for Brazil. Neymar (61) will soon overtake Ronaldo, and will eventually overhaul Pele as well. It’s hardly his fault that many of his goals have come in friendlies: He came into the side at the very moment that, as 2014 World Cup hosts, there was a dearth of competitive fixtures. He was unlucky to get injured during the course of the 2014 tournament and, antics aside, his performances in Russia 2018 before the quarterfinals exit to Belgium were at least as good as could have been expected from a player coming back from an injury. His injury curse struck again last year, as he was forced out of the Copa America.

On the domestic side, injuries have blighted his time in France too. Whatever the financial considerations, there was an element of nobility in his decision to leave Barcelona. He had won it all there. But, obviously and understandably, it was Lionel Messi‘s team. The time had come to branch out on his own, to see if he could carry a side in the manner of Messi.

The downside of this noble pursuit was that the season was effectively restricted to the knockout stages of the Champions League. Given the financial superiority of PSG, they could win domestic double after domestic double in France and no one would bat an eyelid. The entire project was dependent on what happened at the business end of the Champions League, and injuries at that stage during both of his first two seasons with the club meant that he hardly took the field.

Now, in the course of 10 days in Lisbon, during the Champions League’s shortened mini-tournament caused by the coronavirus pandemic, he can make up for lost time.

By the time the Champions League trophy is lifted on Sunday, it is possible that either Neymar’s legion of fans will be partying, or his army of haters will feel that they have extra ammunition. There was evidence for both sides in those dramatic 95 minutes on Wednesday. Neymar is an exceptionally talented footballer, and some of those skills were on show in the first half. Atalanta pressed high, leaving space behind their defensive line; Neymar was able to burst behind and capitalise on his acceleration and divine balance — as well as that capacity the truly great players have to make it seem as though time is moving more slowly for them.

In an ESPN FC exclusive, Tyler Adams says why RB Leipzig won’t have a specific game-plan to stop Neymar & Mbappe.

At top pace, while changing direction, Neymar can see a hole opening up between the legs of an opponent, and is capable of calculating the angles and the possibilities in a microsecond. He could have scored or set up at least three goals, but made the wrong choice with the final option. He was simultaneously the most outstanding player on the field, and the most wasteful.

In the second half, protecting their 1-0 lead, Atalanta dropped deeper. Starved of space — and starved of partners — Neymar was less effective. There were times when he carried the ball too much himself, inviting fouls, and he became increasingly frustrated when free kicks were not awarded his way.

However, the game changed after the introduction of Kylian Mbappe, who was not fit enough to start the game. Good teams are built around little partnerships, and when the 21-year-old arrived, Neymar had someone to play off. There was an element of scrappiness about Marquinhos’ equalising goal in the 90th minute — Neymar’s far post volley back across the box was not the cleanest of connections — but the dramatic injury-time winner was a thing of beauty, as his wonderfully timed pass split the defence and allowed Mbappe to set up Eric Maxim Choupo-Moting to score. It was the best of Neymar: his talent at the service of the team.

Stand by for more of the same against RB Leipzig, as Tuesday’s semifinal is set up for him.

Diego Simeone’s Atletico Madrid boast all the tools to frustrate Neymar, deny him space and put him off his game, but their conquerors in the quarterfinals, RB Leipzig, are more open. Like Atalanta in Wednesday’s first half, the German side are likely to play with a high line. The duel between the PSG attack and Dayot Upamecano, Leipzig’s defensive rock, holds the key, and this time Thomas Tuchel has Angel Di Maria available and Mbappe possibly fit enough to start.

Neymar has his stage and he has his colleagues. Time to prepare the haircut, the sunglasses and the sound system.

For the first time in a decade and a half, the semifinals of the Champions League feature neither Messi nor Cristiano Ronaldo. Suddenly the buildup in Brazil to the next “Ney Day” is concentrating on how Neymar has to be chosen as the World Player of the Year if PSG pick up the trophy.

Such focus is surely exaggerated. If the past few days have taught us anything, it is the value of the collective in football. In form, on fire and fit, Neymar is no luxury. He is a huge asset to his side. Come the end of this week, he may have made that obvious. If so, even those who can’t bring themselves to like him might be able to respect what he brings to the game.