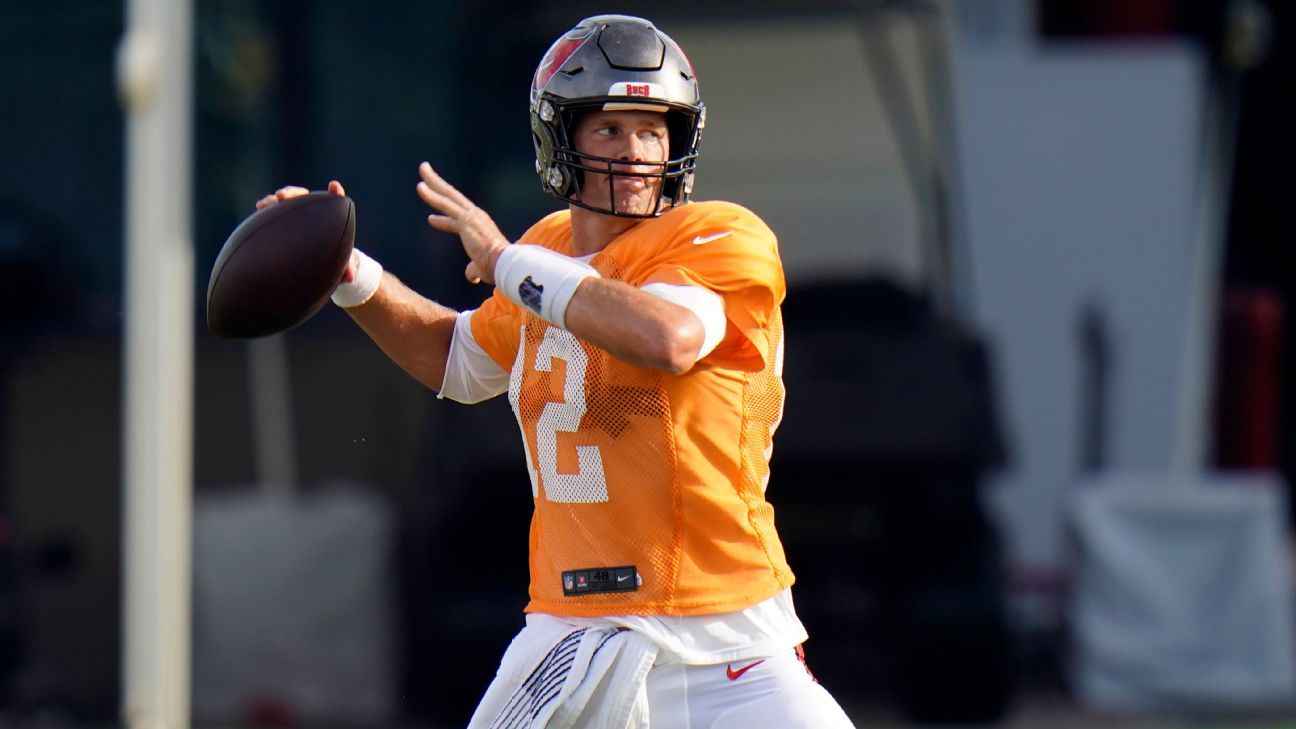 TAMPA, Fla. — On the first pass play of the Tampa Bay Buccaneers‘ first padded training camp practice Monday, Tom Brady, playing in a new offense for the first time in 20 years, air-mailed a deep pass to second-year wideout Scotty Miller, essentially erasing all doubt about his arm strength at age 43.

The pass came off play-action and went for 50-plus air yards. And Miller, slipping behind defenders and never breaking stride, took it to the end zone as Brady let out a loud “Wooooo!”

When asked about Brady and the deep ball, coach Bruce Arians said, “I think he answered that question the first day. I think he was dropping 60-yard dimes. Our job is to make sure he maintains that strength and not overwork it because he’s an over-worker.”

In addition to the Miller pass, Brady made tight-window throws between defenders to wide receivers Mike Evans and Chris Godwin. He also hit tight end Rob Gronkowski in the end zone for a touchdown during a red zone period, and made a nice throw over the middle to Justin Watson that went for a touchdown.

There were a couple of hiccups, too. Early on, Brady was intercepted by Pernell Motley on a pass intended for Evans — Brady’s second pick of camp (his first was Friday). Motley, an undrafted free agent out of Oklahoma, jumped Evans’ out route along the right sideline.

Brady was also nearly intercepted again by Carlton Davis on a deep pass intended for Cyril Grayson, but that instead was broken up. There was a missed connection to running back LeSean McCoy on a jump pass, an overthrow to Evans near the right sideline, and a quick pass that was simply too tall for Miller.

When asked about Brady’s first performance in pads, Arians said, “Everything I expected. He’s still learning some guys. He was a little bit hesitant on a throw with a young receiver today — they got their hands on it. He’s throwing to the right guy all the time.”

“The 7-on-7 is what it’s supposed to look like — completion after completion. In the blitz drills, he’s seeing how we call it, how we protect it. He’s doing a real good job with his hots and sights. He’s right where he needs to be. I’m not worried about him.”

It’s still Arians’ “no risk it, no biscuit” offense, with tons of deep-ball opportunities, but there are noticeably more three-step drops, highlighting Brady’s ability to get the ball out quickly to deliver a quick strike.

Tight end O.J. Howard said of Brady, “He does a really good job of putting the ball in a spot where you have the opportunity to make plays and run after the catch. It allows the defender not to make a play on it.”

One player who can help that will be Brady’s favorite target, Gronkowski, whom Brady convinced the Bucs to trade a fourth-round pick to acquire and lure out of retirement. Gronkowski’s 3,127 yards after the catch are more than any other tight end in the league since 2010 (new Bucs RB McCoy actually has the third most of any position in the league since 2010 with 3,814 yards after the catch).

But just like Brady, Gronkowski hasn’t had a completely seamless transition. He’s still adjusting to playing in Florida’s 90-degree temperatures, with 90% humidity, which can make August practices feel like a sauna.

Arians joked, “He’s probably in ‘New England shape’ right now. He’s not ‘Florida shape.’ The heat’s kicking his ass pretty good. It’s different, man. When you train in New England and then come down here, it’s really different. We laughed about it out there today — I don’t think he’s ever sweat that much in his life. It takes a little time to get into the Florida shape, but as far as playing in a game, he’s more than ready right now.”