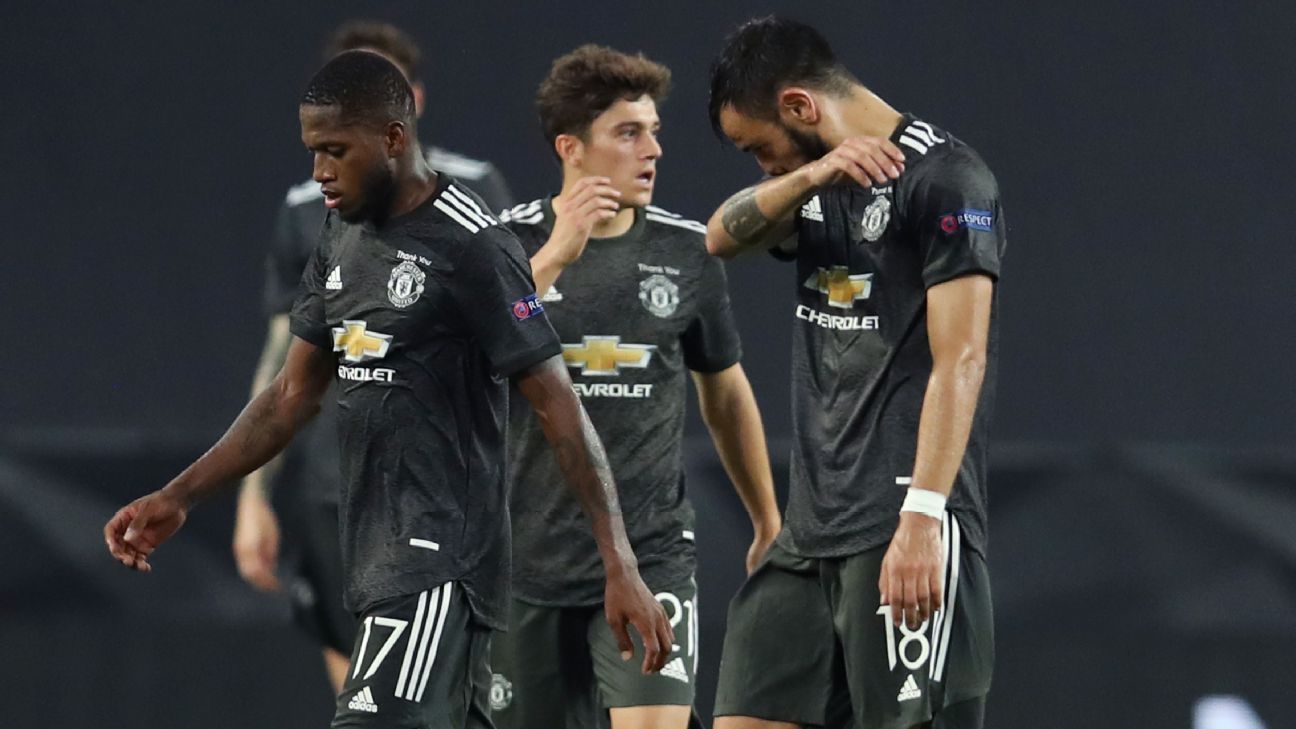 COLOGNE, Germany — A Manchester United season that looked like it may never end finally has, and with it came a reminder that Ole Gunnar Solskjaer’s team remains a work in progress.

After playing 61 games over more than a year, United’s campaign ended with a 2-1 Europa League semifinal defeat to Sevilla. You can add the competition to those in which they came up just short; this being a third last-four defeat of 2019-20 after exits at the same stage of the Carabao Cup and the FA Cup.

Solskjaer’s wait for a first trophy goes on and the transfer window will be about making that next step because, despite the progress that has been made, the manager knows better than most that semifinals and third-place finishes in the Premier League is not good enough for such a big club. For the first time in 31 years, United have gone three seasons without silverware.

The foundations of a team Solskjaer thinks can be successful are in place, but it was telling that he waited until the 87th minute to make a substitution, almost 10 minutes after substitute Luuk de Jong beat David de Gea, who was preferred to Sergio Romero, with a close-range finish to give Sevilla a lead they would not relinquish.

When Solskjaer was searching for a game-changer late on, it was difficult to see where a goal might come from; Juan Mata, Odion Ighalo, Daniel James and Timothy Fosu-Mensah did come on, but none could offer what was needed. No wonder the manager said after the game that “we need to strengthen the squad depth, of course.”

A player like Jadon Sancho would certainly help if United find themselves in a similar position at the business end of next season, but while the window is open until Oct. 5, time is already against executive vice-chairman Ed Woodward and chief negotiator Matt Judge to get new faces in before the new campaign starts in four weeks.

The coronavirus pandemic has squeezed the club’s finances but that does not remove the fact that United need at least one forward — they had 20 shots against Sevilla but only converted a Bruno Fernandes penalty — and a centre-back — the Spanish side were able to take advantage of some sloppy defending and score from crosses — to increase options.

Aaron Wan-Bissaka, in particular, will not want to watch the replays of either Sevilla goal, while the second prompted a ferocious argument between Fernandes and Victor Lindelof. At the other end, Fernandes, Anthony Martial, Marcus Rashford, Mason Greenwood and Fred all wasted good chances to score.

Steve Nicol explains what went wrong with Manchester United’s defense in their loss to Sevilla in Europa League.

Sevilla, who have won the Europa League five times since 2006, were grateful for an impressive performance from goalkeeper Yassine Bounou, but they were also more clinical in the key moments, scoring with two of their three shots on goal.

A bad-tempered 90 minutes — at one point substitute Nemanja Matic stood up to tell the noisy Sevilla contingent in the stands to sit down and shut up — ended with Solskjaer complaining to German referee Felix Brych, but he also had cause to be unhappy with the finishing from his forwards.

“It’s very disappointing,” he said. “We’re not devastated, but it’s one of those hard ones to take because you feel you’ve played some fantastic stuff at times, created chances and just couldn’t get the goal that I felt we deserved at time. In different spells of the game, I thought we were absolutely excellent.”

As this drawn-out season has come to its conclusion, United have been guilty of slow starts, but that was not the case on Sunday. In much cooler conditions than they endured against FC Copenhagen, the front three of Martial, Rashford and Greenwood looked more energetic from the opening whistle and United took the lead in just the eighth minute.

With assistant manager Michael Carrick screaming “go at him” from the touchline, Rashford sprinted down the left and rolled a pass into Martial. The England international got the ball back, and as he went to shoot was clattered by Sevilla defender Diego Carlos.

Brych awarded the penalty — United’s 22nd of the season and sixth in their last 10 games — and Fernandes hopped, skipped and jumped before firing his spot kick into the top corner. He has missed just once from 12 yards in four-and-a-half years and he was not about to fluff his lines in a European semifinal.

Sevilla, though, have not lost since February and showed in the 26th minute the quality that saw them finish fourth in La Liga. Lucas Ocampos rolled in Sergio Reguilon down the left and with Wan-Bissaka slow to track back, the subsequent cross found former Liverpool man Suso at the back post, ghosting in behind Brandon Williams to equalise.

Greenwood and Martial forced Bounou into good saves as United dominated the early stages of the second half but, with 12 minutes left, De Jong made Solskjaer’s team pay for their wastefulness by drifting between Lindelof and Wan-Bissaka to turn in Jesus Navas‘ cross from the right.

United did not create anything of note in the closing stages and, as the Sevilla substitutes hopped and sang at the final whistle, Matic stormed down the tunnel and Andreas Pereira threw his water bottle down in frustration.

Whether next season has a more positive ending will depend heavily on how well United perform in the transfer market.

“It’s going to be a strange summer,” Solskjaer said “We are looking to improve; the league starts quickly but the market is open for a long time. We have to be good, smart and clever.”

That is easier said than done.