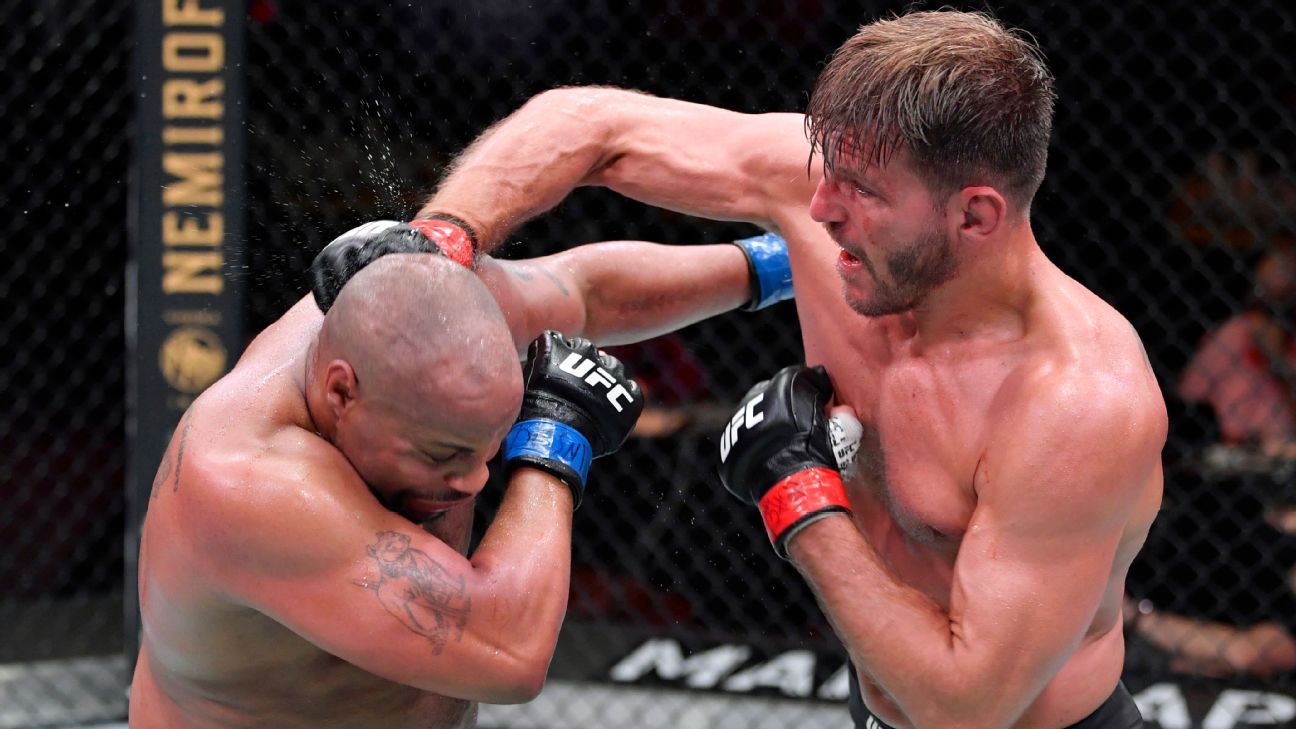 LAS VEGAS — The backdrop for UFC 252’s main event heavyweight title fight could not have been more intriguing. It was a “perfect storm” of circumstances, according to UFC president Dana White.

Cormier knocked out Miocic to seize the title in 2018. Miocic returned the favor to win it back in 2019.

So, Saturday was for all the marbles — not only a UFC belt, but eternal bragging rights for the winner and the distinction of greatest UFC heavyweight of all time. And oh, on top of all that, it would also serve as the final fight of Cormier’s career. No one knew how the night would go, only that it would not disappoint.

There was no knockout this time, but Miocic won a fiercely contested battle by unanimous decision. Here are five critical aspects from the most important fight in UFC heavyweight history.

In rounds that close, moments can mean everything. Visible damage means everything. And Cormier struck first in the opening round, when he staggered Miocic with a right hand just moments before the bell.

A loaded UFC bantamweight division will be getting even deeper this weekend. In the UFC Fight Night main event on Saturday, Frankie Edgar will make his debut at 135 pounds against Pedro Munhoz. Edgar is a former UFC lightweight champion, while Munhoz has won three of his past four fights.

That shot ruined what had been a pretty good round to that point for Miocic. And two of the three judges scored it for Cormier.

But wouldn’t you know it, the same thing happened in the very next round, with the roles reversed. Cormier outlanded Miocic in the second round, but Miocic dropped him with a wide right cross in the final 10 seconds to steal the round on all three judges’ scorecards.

“Did I drop?” Cormier asked his corner in between the second and third rounds. “Did I drop?”

“No,” his coach, Bob Cook, responded. “But I need you to get your head in this game.”

Daniel Cormier analyzes his loss to Stipe Miocic for the heavyweight title, where Cormier claims to have suffered difficulties seeing from an eye poke. (edited)

It took an entire year for the UFC to book Saturday’s trilogy fight, and the main reason for the delay was Miocic’s eyes. He required eye surgery in 2020 after sustaining injuries caused by eye pokes during his 2019 bout against Cormier. Miocic told ESPN prior to the fight he intended to bring up the subject of eye pokes to the referee.

It didn’t take long for that narrative to impact the third fight. Cormier poked Miocic in the left eye during the first round.

Late in the third round, Cormier turned away from Miocic in pain, and as the bell rang to finish the round, Cormier yelled in the direction of referee Marc Goddard that he’d been poked. Cormier was incensed as he returned to his corner, even prompting Goddard to walk him back and say, “Daniel, you got punched. Sit down, my friend.”

However, replays would show Miocic’s left hand was open during one of the punches, and his outstretched fingers dug into Cormier’s left eye. After the fight, Cormier refused to complain about Miocic’s intentions within that moment, but was still blatantly heated about the foul.

“I felt bad,” Miocic said. “But it wasn’t intentional. I told him, ‘Sorry,’ during the fight. What are you gonna do? He did it to me multiple times. Whatever, mine wasn’t on purpose. Honestly, I didn’t know I had poked him in the eye until I looked up and saw the replay and said, ‘Oh, I totally poked him in the eye. My bad.'”

Before the end of the night, Cormier would tell ESPN he’d been diagnosed with a torn cornea, and Goddard would issue a public apology for missing the foul.

Chael Sonnen breaks down Stipe Miocic vs. Daniel Cormier and explains what the difference-maker was in Miocic’s unanimous decision victory.

About 90 seconds into the third round, Miocic’s corner told him to push Cormier into the fence and keep him there. That position became a favorite of Miocic’s the rest of the way, as he held Cormier in the clinch for extended stretches of time in the third, fourth and fifth rounds.

In the immediate aftermath of the fight, Cormier admitted that might have been the deciding factor in a very close fight. Judges ultimately scored it for Miocic 49-46, 49-46 and 48-47.

“I believe that separated the close rounds,” Cormier said.

Where was the wrestling?

The smaller cage in the UFC’s Apex facility was supposed to favor Cormier, the stronger wrestler and a former Olympian. And after abandoning wrestling in his second fight against Miocic, Cormier vowed not to make the same mistake Saturday.

“I love fighting at the Apex,” Cormier said earlier this summer on ESPN’s DC & Helwani Show. “That old leg is gonna be right in front of me to grab. If you want to see a 25-minute stand-up fight, that’s not what you’re getting. I hope Stipe has his wrestling shoes, because with the small cage, single-leg [takedown], single-leg, single-leg, single-leg — wrestling.”

And Cormier did get a takedown in the first round, but that was it. He attempted just one more, and that was unsuccessful.

Cormier had said it’s not as easy it sounds to take down an athlete like Miocic, who said he had been working on his wrestling more this training camp.

But as it turned out, Miocic didn’t need those wrestling shoes.

Joe Rogan and Dominick Cruz discuss the historical implications of Stipe Miocic’s victory over Daniel Cormier in the heavyweight title fight at UFC 252.

Although many undoubtedly want to hear more from Cormier about his future, as of right now, the 41-year-old legend says he is done. Prior to leaving the UFC’s Apex facility, he told commentator Joe Rogan he does not expect to fight again.

“I’m not interested in fighting for anything but titles, and I don’t imagine there’s going to be a title in the future,” Cormier said. “That’s it for me. I’ve had a long run. It’s been great. I just fought my last fight for a heavyweight championship and it was a pretty good fight.”

At the postfight news conference, White said he still doesn’t think Cormier will retire, a prediction he made prior to the fight as well.

Miocic, on the other hand, said he will absolutely continue to fight, and even joked at the news conference about any rumors that he was also considering retiring.

Heavyweight contender Francis Ngannou, who lost to Cormier in 2018 but has since won four fights via first-round knockout, watched the fight from his home in Cameroon and told ESPN over the phone he would love to face Miocic in December. White confirmed at the news conference that Ngannou will get the next title shot.

If there is any wrench in those plans, it will be light heavyweight champion Jon Jones, who also threw his name in the ring to face the heavyweight GOAT.

“Avoid Stipe’s right hand, I’m too fast, I’ll be too strong when the time is right and have way too much energy,” Jones wrote on Twitter. “Soon and very soon I’ll be considered the baddest man on this planet.”