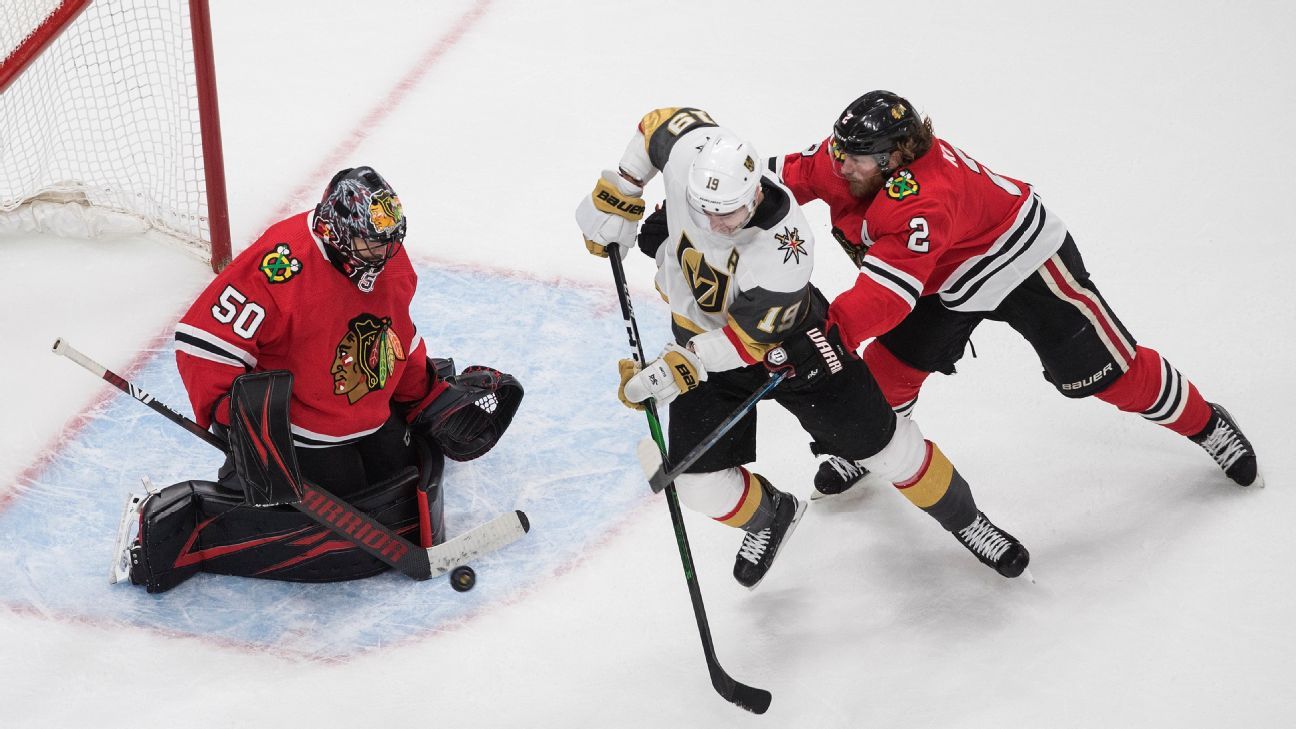 EDMONTON, Alberta — The Chicago Blackhawks were in deep trouble. That’s when Corey Crawford took over.

Crawford made 48 saves in a stellar performance, and the Blackhawks beat the Vegas Golden Knights 3-1 on Sunday night to stay alive in their first-round playoff series.

“It’s probably as good as he’s ever been,” Chicago defenseman Duncan Keith said. “I don’t know what the shots were, but they had a lot of shots and he made himself big every time. There wasn’t a whole lot of rebounds laying around either, so that was a big part of that. He was our best player tonight.”

Drake Caggiula and Matthew Highmore scored first-period goals for the Blackhawks, and Alex DeBrincat added an empty-netter with 10 seconds left. Chicago handed Robin Lehner his first loss in a Golden Knights uniform since the goaltender was acquired in a trade with the Blackhawks in February.

Vegas suffered its first loss since arriving in Edmonton for the NHL restart. The Golden Knights, who entering Sunday were the last remaining unbeaten team participating in the restart, will have another chance to close out the Blackhawks in Game 5 on Tuesday.

“The mood in the room is that if we continue to play like that for Game 5 we’re going to give ourselves a heck of a chance to win the game,” Vegas defenseman Nate Schmidt said.

Shea Theodore scored his fourth playoff goal for Vegas in the first period when his shot from the point slipped through traffic in front of the net. But it was the only time the Golden Knights managed to beat Crawford on a night when the playoff-tested veteran was the best player on the ice.

Crawford, who was in net when Chicago won the Stanley Cup in 2013 and 2015, set a playoff career high for saves in a regulation game.

“I think for the most part we kept them to the outside when they did have those looks where they had maybe a second or two to hold it and shoot,” Crawford said. “It wasn’t really coming from the middle, so that helps me a lot to be on the angle and give up less net.”

Playing less than 24 hours after a 2-1 loss in Game 3, Crawford was under attack from the outset, especially after the Blackhawks took a 2-0 lead on Highmore’s unexpected goal. Highmore threw a shot on net from below the goal line and got a fortunate deflection when Lehner attempted to redirect the puck with his head, but instead sent it into his net.

“It went in the net, so I wasn’t very happy about it,” Lehner said. “It’s a game of mistakes. I made a mistake. It was a pretty good shot too. But I have to have that.”

Theodore’s shot slipped through, but nothing else did. Crawford was up to every challenge, especially as the Golden Knights continued to test him with high shots to the glove side. Crawford made a diving save on Max Pacioretty and stuffed William Karlsson on a breakaway in the second period.

But Crawford’s best sequence may have come midway through the third period when he stopped Karlsson’s attempt with his mask, and then gloved Zach Whitecloud’s wrist shot from inside the right circle.

“Our third period was great,” Crawford said. “They just seemed to be throwing pucks on net and our guys were there to clear it and just get it out of there, get it out of the chaos. We came back great defensively in the third.”

Chicago’s penalty killers also had a solid night. Vegas went 0 for 3 with the man advantage and has not scored a power-play goal in the series. The Blackhawks have killed off the past 14 power plays dating to the qualifying round against Edmonton.

Lehner had won all seven of his starts since arriving in Vegas — three in the regular season and four in Edmonton. Lehner made 22 saves.