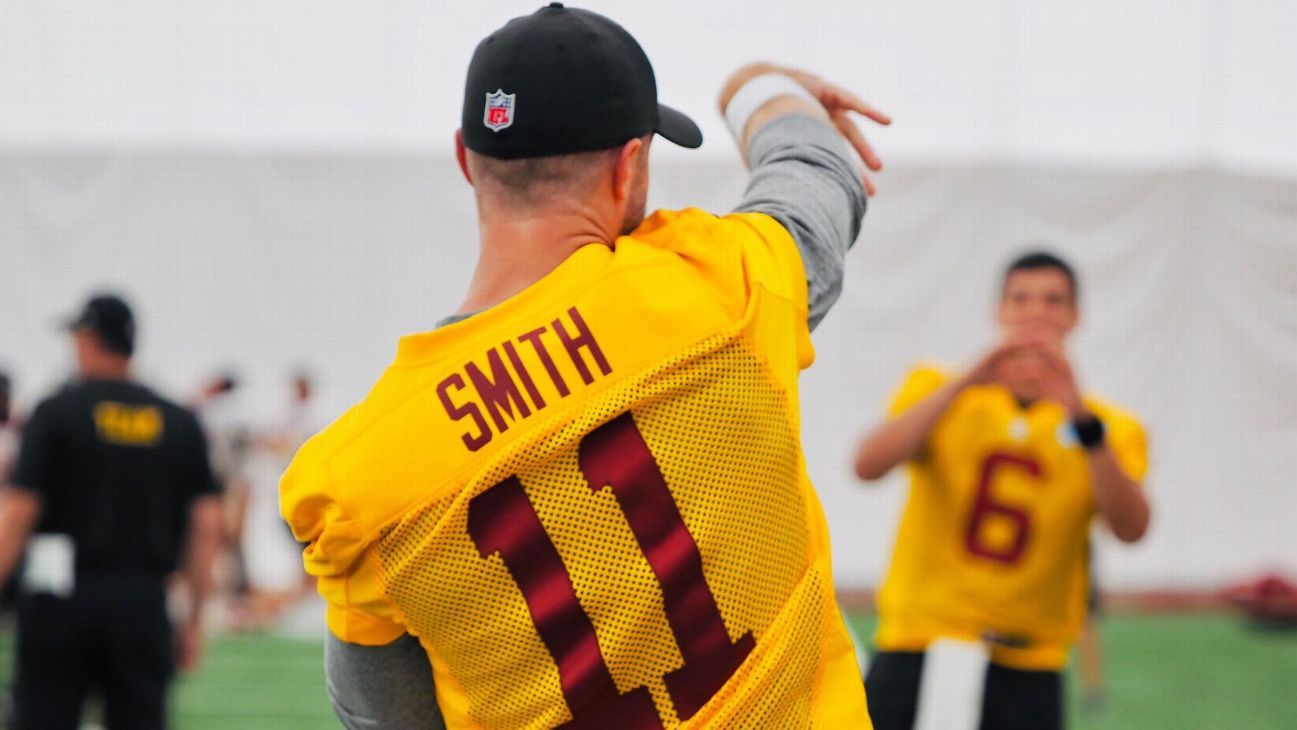 It was a day of positive vibes for quarterbacks during Sunday’s 2020 NFL training camps as Alex Smith of the Washington Football Team was cleared for football activity and activated off the physically unable to perform list, capping a remarkable recovery from a leg injury that nearly cost him his life.

Smith, 36, who broke the tibia and fibula in his right leg in a November 2018 game, is expected to be on the field when Washington begins full-pad work on Tuesday.

In Jacksonville, QB Gardner Minshew has made a good impression on new offensive coordinator Jay Gruden, who is pleased with how fast the second-year QB has picked up the offense.

Here’s what you need to know from camps across the league for Sunday:

Jump to the best of the day:
Photos | Videos | Quotes | Notes from NFL Nation

Source: Giants plan to sign ex-Panthers kicker Graham Gano
The New York Giants plan to sign former Pro Bowl kicker Graham Gano, a source told ESPN. Gano, 33, was the Panthers’ kicker during current Giants general manager Dave Gettleman’s tenure in Carolina. The plan appears to be for Gano to compete with veteran Chandler Catanzaro for a job. The Giants signed Catanzaro several weeks back after releasing Aldrick Rosas, who is dealing with his legal issues from a hit-and-run accident earlier this offseason.

Joe Theismann: Smith’s injury much worse than mine
The one former NFL quarterback who understands the leg injury Alex Smith has overcome is rooting hard for the Washington QB.

The former Washington quarterback suffered the same injury in 1985 and was in the stands when Smith broke his leg 33 years to the day Theismann was injured. Theismann needed only one surgery on his right leg to clear up an infection; Smith required 17.

“He has gone through a lot more than I had to go through,” Theismann said. “… Alex came within 24 hours of losing his leg. I didn’t wind up with complications; he wound up with a tremendous amount of complications. It wasn’t just healing from a broken leg. The mountain he had to climb is so much greater.”

Today was a good day 👏 pic.twitter.com/2MD4C4UJpI

Who’s the most underrated on the team? pic.twitter.com/9ybJxLLRVe

.@Matt_Skura62 passed his physical and is expected to be on the field Monday.

“No matter what happens he’s already won the award for comeback player of the year.”

The Cowboys want to be able to take the ball away better than they have in recent years. Sunday’s work might be a good start. Anthony Brown intercepted a deep ball from Andy Dalton to Michael Gallup that was slightly underthrown and tipped into the cornerback’s hands. Corner Chidobe Awuzie made a diving pick of a Clayton Thorson throw. Linebacker Jaylon Smith had two pass breakups and linebacker Leighton Vander Esch broke up one on a bootleg from Dak Prescott to Blake Jarwin.

Rookie Trevon Diggs, who was selected in the second round in part because of his playmaking ability, also broke up a deep ball from Prescott to Devin Smith.

New Jaguars offensive coordinator Jay Gruden said he’s been impressed with how second-year QB Gardner Minshew has picked up the offense and how smooth he looked in the first week of practices. That’s not a surprise, though, considering Minshew is on his seventh offensive system since the 2014 high school season and has thrived at most stops.

“We’re starting to install the meat and potatoes of our offense and Gardner’s been great,” Gruden said. “He’s a hard worker. He’s willing to learn. … He’s got a huge upside and we’re excited to tap into that.”

Minshew didn’t seem to have any confusion on Sunday. He held the ball a little too long a couple times while trying to find a receiver in 7-on-7 and 11-on-11 drills, but his throws were crisp. While he might not completely know the offense at this point, he was calling out checks and re-aligning players before the snap. In one instance he moved rookie WR Laviska Shenault across the formation into a different spot.

“I like where his mind’s at,” Gruden said. “We’re trying … challenge him with these concepts and protections and so far it’s been great.”

Not so sure Jon Gruden would describe Marcus Mariota‘s Sunday practice as “electrifying” again. Mariota struggled mightily on intermediate passes, badly missing at least three receivers (one pass nose-diving before two defenders could pick it off) on plays that needed time to develop.

&• Jags’ Leonard Fournette: ‘I’m not a jerk’
&• Jets need ‘commander’ Sam Darnold
&• What to expect from Kirk Cousins in ’20
&• Top CB? Try Packers’ Jaire Alexander
&• Coaches are higher risk but not opting out

Granted, Gruden praised Mariota for his running ability on Friday, and Mariota did flash when the pocket broke down. And he did look good at the 10-yard line, firing TDs to receiver Bryan Edwards, who outleapt fellow rookie Amik Robertson, and tight end Foster Moreau on quick-hit passes on crossing patterns across the back of the end zone. But Mariota is still picking up the offense after a hands-off offseason.

Starter Derek Carr, meanwhile, again looked crisp, though he was picked off by linebacker Nicholas Morrow in the middle of the field trying to find tight end Darren Waller on a misdirection play.

And while Josh Jacobs practiced for the first time since media was allowed in on Wednesday, he showed why his goal is to catch 60 balls this season. Taking a pass in the right flat from Derek Carr, Jacobs sped up the sideline, where he was met by safety Damarious Randall.

“Boom,” Jacobs yelled, feigning lowering a shoulder into Randall. “I just retired you. You’re going to have to make a grown-man decision.”

Randall laughed. “Your ankle will make that decision for you.”

The Raiders practice in pads for the first time on Monday. “That is exactly what we need,” said linebacker Cory Littleton. “It is a little intimidating at first.” — Paul Gutierrez

“The unique thing with him (is) the ball skills. I just think he is special in that regard. When the ball is in the air, he has a knack of getting it any which way he can — one-handed, two-handed, along the boundary. He just does a nice job from a ball skills standpoint.”

The Jets are hurting at their most vulnerable position — wide receiver. They’re already down two players, rookie Denzel Mims (hamstring) and Vyncint Smith (core muscle). That’s why they signed free agent Chris Hogan, 32, but it will be a few days before he can practice because of the league’s COVID-19 protocols. They have two proven receivers, Breshad Perriman and Jamison Crowder, and a whole lot of questions. One name to watch: First-year WR Jeff Smith, who started his Boston College career as a quarterback. He caught coach Adam Gase’s eye last season.

The Patriots held their final OTA-type practice Sunday, setting the stage for the first full-pads practice on Monday. Running back Rex Burkhead, on the team’s official Twitter account, said: “Great day. Guys getting after it. Looking forward to tomorrow, putting the pads on, and getting the physicality going.”

All-pro Saints RT Ryan Ramczyk said he had his knee scoped after the season to clean up some cartilage — but it doesn’t sound like anything that is affecting him now. Ramczyk also commented Sunday on how good veteran LG Andrus Peat looks after losing some weight in the offseason and coming into camp in great shape. The media will get its first glimpse of all these guys on the field Monday when the Saints have their first padded practice of the offseason.

The Bills will give all their specialists an equal number of reps during training camp as they seek winners of their competitions at kicker and punter. Buffalo drafted Tyler Bass in the sixth round to compete with incumbent kicker Stephen Hauschka and signed Kaare Vedvik to push last year’s starting punter Corey Bojorquez. The equal reps are an effort to simulate competition without preseason games.

Media were allowed to watch a Matt Rhule practice on Sunday for the first time since the former Baylor coach was hired in January. The session lived up to its billing with high energy and a fast pace. It was highlighted by big plays and Rhule stopping the music blaring during team drills several times to let players know what he was thinking. He once had the offense drop and do push-ups. Just don’t look for Rhule to put on pads and a helmet — as he did at Baylor and Temple — when the Panthers have their first padded practice on Monday.

The first-year NFL coach said “no way,” that those days are long gone.

Patrick Mahomes has made similar throws before, but that didn’t make his touchdown pass to backup wide receiver Gehrig Dieter in a 7-on-7 drill any less impressive. Mahomes was drifting to his left and couldn’t step into the throw but still completed the pass with just a flick of the wrist.

“The great thing about training camp practices with (Andy) Reid is that he allows me to try those different things,” Mahomes said. “As you’ve kind of seen camp go, there have been times where I’ve made these throws and they worked out and we scored touchdowns. Then I threw one one day that was an easy interception. He lets you try those different things and you just learn from them, see what you can and can’t do. It helps me when I get into a game.”

Even after seeing such throws before, Reid still can’t help but look on with a sense of awe. “I appreciate his talents,” Reid said. “I remind the coaches often that that just doesn’t happen all the time, with every quarterback. But he makes it look easy and does it time after time. You don’t ever get complacent or satisfied with those, you enjoy each one of them.”

Quarterback Alex Smith indeed returned to practice Sunday, though it’s going to be a little while before he’s able to participate in full-team work. Even though Smith was activated off the PUP list Sunday, he’ll still be limited as the team eases him back into drills. They had just reached a point after two weeks where they need to see how he handles being in a pocket when the play goes off-schedule and when he has to react. It could still be some time before they put him in such a situation, but until then any talk about him seriously challenging for the starting job will be muted.

Safety Kenny Vaccaro went inside during team stretch with a sleeve on his right leg and came back out and rode a stationary bike. He left midway through practice on Friday. However, the depth at safety showed with Amani Hooker filling in for Vaccaro and making a nice pass breakup during 7-on-7s. Dane Cruikshank also received extensive work.

Derrick Henry worked extensively with running backs coach Tony Dews on receiving during special teams periods. He caught a pass and raced down the field during the team period as well.

Rookie running abck Darrynton Evans looked sharp in route running and showed some burst to the edge running the ball. But Evans fumbled twice which is rare. He didn’t fumble at all during his college career at Appalachian State.