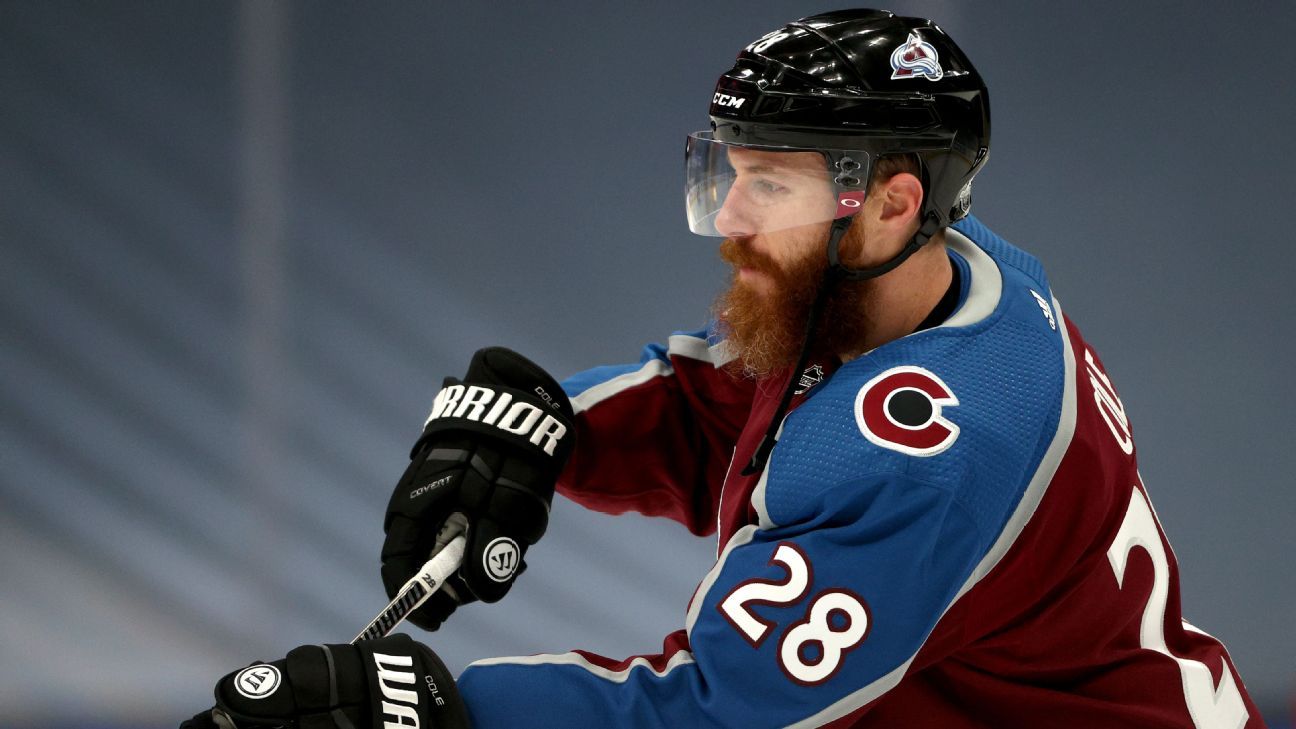 Colorado Avalanche defenseman Ian Cole is a 10-year NHL veteran, two-time Stanley Cup champion with the Pittsburgh Penguins, and he already has one of the best beards in the 2020 NHL playoffs.

He also was kind enough to spend some time on his off day in the bubble answering questions from fans, submitted to ESPN.

So as the Avs prepare for the next game in their series against the Arizona Coyotes, let’s hear from Ian on how he’s combating boredom in the bubble, what the food is like, why it looks like he’s eating his jersey during warm-ups, and of course, the latest fashion choices from teammate Nikita Zadorov.

Cole: When you’re confident in your team, there is no difference between a regular-season beard and a playoff beard. But it is funny to see it grow. I pretty much trim it up or shave it before my headshot for the year, so it’s funny to look back and see a little bit of scruff or something, and right now it’s just … out of control.

Armin K.: What bet did Nathan MacKinnon lose that he is wearing that Nikita Zadorov brand “NZ” hat all over the bubble?

Cole: That’s a great question. I don’t think he officially lost any bet, and I think generally speaking we like to support each other as teammates, even if you make up your own brand and your own logo. But there are some lines, even as a teammate, that I will not cross.

Richard L.: How much are you guys chirping Zadorov for his game-day outfits, or do you think they’re cool?

Cole: There are a lot of chirps right now. Z is a guy that is supremely confident, and does not get affected by being chirped. So it makes it a little better, because he can take it, and he laughs. In that sense, he is getting chirped pretty much constantly. Especially with the patchwork shirt he wore the other day. We were reading some of the comments to him in the locker room. And there was one that said, “How many flannels had to die to make this shirt?” and we were cracking up. I told him, “Just because something is expensive, it doesn’t mean it looks good.” He said, “It’s Dolce & Gabbana, man!” And I said, “I know, but it’s still ugly.”

Kevin M.: What is your favorite memory from being an Ottawa Senator?

Cole: The call from [Senators GM] Pierre Dorion to say, “Hey, don’t bother coming, we’re just going to trade you in a few days. We’re just doing this to clear cap space. We think you’re a really good player, but this isn’t the direction we’re going, it’s all part of the plan. And if we can’t, then you can come join us later, but just hang out for the weekend.” The phone call was probably three minutes.

We were actually in Carolina, got the call that I’d been traded [from the Penguins to the Senators], flew back from Pittsburgh. I got that call from Dorion. Like, you can pack your stuff but don’t come to Ottawa. So I’m like, “OK, sounds good, I’ll hang out.” So when I left Carolina, the team carried on to Florida on a road trip, and I was still in Pittsburgh, and I was like, “What am I going to do with myself?” Well, I still had my fob so I went down to PPG Arena and worked out twice. No one was there, they were all on the road, so I was like, I know I’m not going to see anybody. I don’t think anybody from Pittsburgh knew … until maybe this story comes out.

Michele: In your expert opinion, do you think Sidney Crosby could crush a watermelon with his thighs?

Cole: He’s got some very strong thighs on him. Do you need to be schooled in crushing watermelons? I’m not really sure how that works. But if it’s purely based on size and strength, I’m sure that he’s capable.

Austin S.: Do you consider your two Stanley Cups a comeuppance against Ken Hitchcock for burying you early in your career?

Cole: I just finished my 10th year now, but when I came up, it was very much still veteran-centric, that was a lot of the team’s focus. It was something where you really had to earn your time and earn your place. Hockey is changing, culturally for the better, in that hey, we have these young guys, we want to give them a chance, we want to get them better, we want to improve them. The situation I was in in St. Louis was, you make one mistake, you’re out of the lineup for the next week. As a young guy, trying to break in — and there’s the adage, it takes 200 games, 300 games to see how a defenseman will be in the NHL — my first few years were very broken up. And we traded for a lot of veteran defensemen, trying to find a guy. It was definitely a very Ken Hitchcock thing, but it definitely made me a bit more mentally tough to fight through all of that, and still have success in this league.

Fitz T.: Has there been any point where being in the bubble drove you crazy?

Cole: No, not really. You’re so focused on the task at hand and playing hockey games and winning hockey games. Obviously, living in a hotel for months on end isn’t ideal, but at the same time, it’s the world we live in right now and the only way we’ll be able to get this done. So we’re all trying to make the most of it, and hopefully win some more games.

Imityaz A.: It’s been two weeks since bubble hockey began. Have you met other teams outside the arena yet? A genuine question: Was it weird or awkward?

Cole: There is way too much commingling for my taste, if we’re being honest. For a playoff series, you certainly, over time, start to hate the guys you’re playing against. I think that’s good, I think that drives performance, but having to see people when you want to kill them is not necessarily an ideal situation. So it’s a little weird. But it’s unprecedented times, so we’ll deal with it.

Cassie: Why do the Vegas Golden Knights get to have a foam campfire from Pottery Barn Kids while we’ve not yet seen such amenities in the Avs’ space?

Cole: I saw that photo, it was like pillows on the ground, I didn’t see a campfire. We have all of the amenities that we need. We have a couple TVs, we have a pingpong table, we’ve got a card table. We get fed food. And this is one of the things I was kind of alluding to it earlier; yes, having amenities is great, and yes, having theme nights that are a hit on social media are great, but we’re here for one reason and that’s to win hockey games. People are like, why don’t you do more fun things? And yeah we do fun things, we hang out with each other, but it’s not like we’re searching for off-the-wall activities.

We just played two games in a row, now we have a day off, then we’re playing another game. Eventually we’re going to have four games in six days here. What are we really going to do on our off days here? Play golf? Are we gonna go play spikeball for six hours? Realistically, no.

Stay up-to-date with scores, schedule, team updates and much more.

Mark M.: Be honest, are you guys just being fed Fyre Festival-style food and hockey players are too polite to complain about it?

Cole: The food has actually been really good. Our team chef has been talking to the hotel, and they’ve been working out the menus. Normally he’s very cognizant of dietary restrictions — gluten-free, dairy-free, stuff like that — so he’s been talking to the chef at the hotel, and they’ve been figuring out ways to work with that, and still make food that tastes good. The hotel has been executing it well, and I’m sure our chef has a hand in that.

Sarah K.: What did you bring to the bubble to stay busy?

Cole: I brought some books. I’m currently reading “Atlas Shrugged” [by Ayn Rand]. It is a heavy book. It’s like 1,100 pages and in size six font. It’s a really good story, I’m like 200 pages in, it’s really good, really interesting, she’s an amazing writer. Very into it, but it’s also a long book.

Joe B.: Would you rather fight one horse-sized Zdeno Chara or 100 duck-sized Nathan Gerbes?

Cole: I’m not sure why they have to qualify those two people with the horse size or duck size. I mean, I’m pretty sure Chara is horse-sized to start with. Not to chirp Nathan Gerbe, but he’s … not horse-sized. But, I’d rather fight one Zdeno over 100 Nathans because I’ve seen Nathan Gerbe when he was at Pioneer High School in Ann Arbor, Michigan. He’s two years older than me, and he’s a pretty well put together short fellow. A hundred of him would be much tougher than one Zdeno Chara.

Kelli F.: Why do you always “eat” your jersey during warm-ups every game?

Cole: Well I chew, but don’t swallow. I don’t know, at some point in warm-ups I just chill on the boards, kind of look by, put my head down, and for some reason my jersey always ends up right at my mouth, so I grab it so it doesn’t end up over my nose. So I kind of just bite it as I’m doing some thinking.

Cassie: Who has spent the most time on the tanning patio?

Cole: Not me, that’s for sure. I get my Vitamin D, but no one can tell. It’s a good question, I would say Josty [Tyson Jost] or Barbs [Mark Barberio] probably. They’ve got that nice Italian olive skin tone that I just don’t have.

Matt P.: Leafs fan aboard the Avs playoff bandwagon here. Just wondering if there’s any chance we can have Nazem Kadri back? We miss him dearly. Get that man a Cup, boys!

Cole: While I appreciate the, uh, audacity to ask that question, we tend to like him. And that’s not how trades work .There’s no givesies-backsies. He’s ours now.