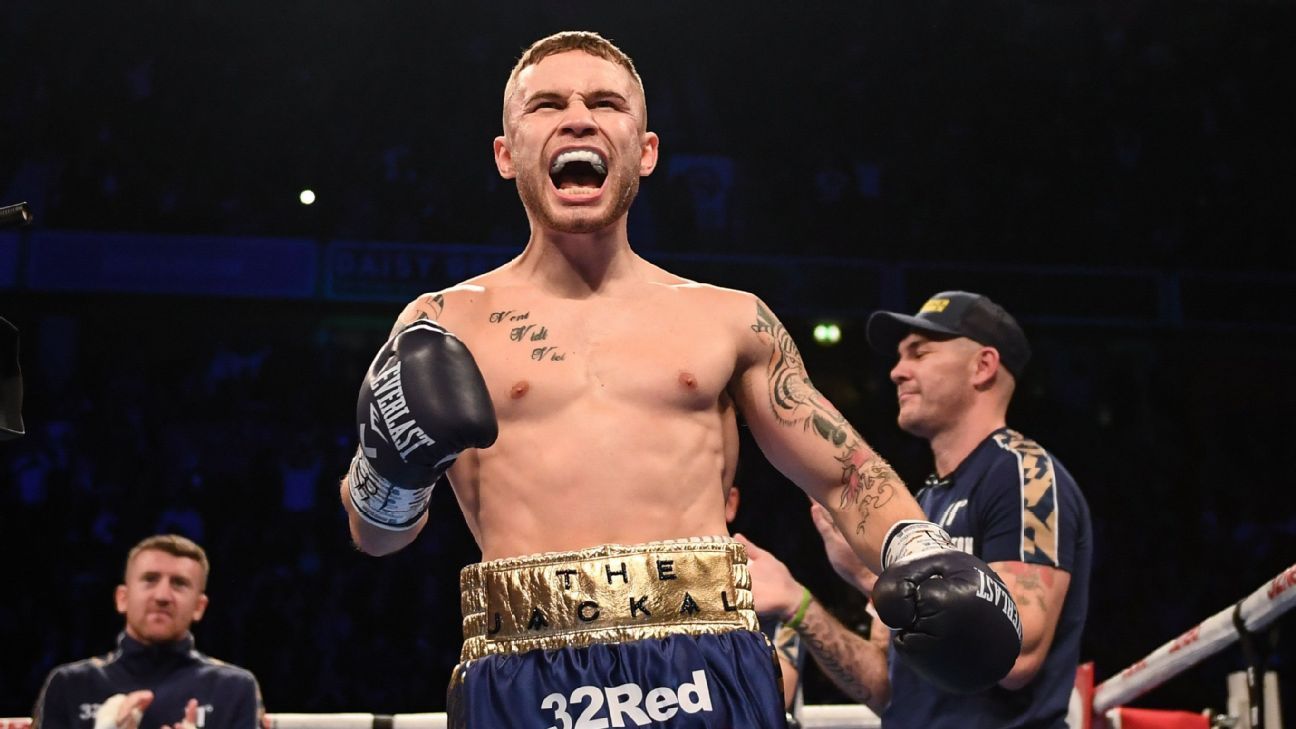 Carl Frampton and Michael Conlan both registered stoppage wins on Saturday to keep them on course for world title bouts later this year, or early 2021.

Frampton, a former world champion at junior featherweight and featherweight, stopped Darren Traynor with a body shot in the seventh round of his first bout since November at a fan-less event due to coronavirus restrictions at the York Hall in London’s East End. Victory keeps Northern Irishman Frampton on track to challenge American Jamel Herring, the WBO junior lightweight champion, later this year.

On the same bill, Frampton’s fellow Belfast, Northern Ireland-based boxer Conlan (14-0, 8 KOs), 28, produced a clinical 10th-round stoppage of Frenchman Sofiane Takoucht after being deducted two points earlier in the fight for low blows. It was a fluent display from Conlan that edges him closer to a crack at the WBO junior featherweight title.

“It was far from my best, but it’s not going to harm me to do the rounds,” Frampton said. “If I had the chance to take him out in the first round I would, but his rounds were good. I had to make sure complacency didn’t creep in and it was a potential banana skin.”

Frampton was content to patiently work behind his jab in the first three rounds. It was generally neat stuff from Frampton, who connected with a chopping right hand in the fourth round.

There were not too many right hands in the first half, though, from Frampton, who was restricted to single blows a lot of the time as Traynor (16-4, 7 KOs), 33, from Aberdeen, boxed at range.

Frampton improved as the fight went on, as if things were coming back to him after the lay-off, and the two-weight world champion showed his quality with two successive body shots from either hand in the sixth round to drop Traynor for a count. The Scot was left facedown on the canvas and almost did not beat the count.

Frampton targeted the body again in the seventh round when he slipped to the side and dug a left into Traynor’s side, which left the Scot turning away in submission.

“It was a better opponent for Herring than the original opponent [Vahram Vardanyan], the dimensions are similar, but I know I have to be better for Herring,” said Frampton, who expects a fight with Herring to happen later this year.

Southpaw Herring (21-2, 10 KOs), 34, from Cincinnati, makes a second defense against Puerto Rican Jonathan Oquendo at Las Vegas’ MGM Grand on Sept. 5. Frampton hopes to face the winner as he chases a dream to become the first Irish boxer to win world titles in three weight divisions.

Herring was watching the fight from home and tweeted a video afterward in which he said to Frampton, “I’ma see you soon, Carl!”

In his first fight since December, Conlan looked razor sharp before taking out Takoucht in the 10th and final round of a featherweight bout.

“I broke him down and took him out,” Conlan said.

Conlan, like Frampton, wants to one day be known as a three-weight world champion, but is a little bit behind his friend in achieving that feat. Conlan, the 2012 Olympic bronze medalist who turned professional after controversy ended his 2016 Olympics, switched targets during lockdown and is now aiming for a first world title shot at junior featherweight rather than featherweight.

With this win, Conlan stayed on course for a shot at the winner of recently crowned WBO junior featherweight champion Angelo Leo (20-0, 9 KOs), from Las Vegas, and Stephen Fulton (18-0, 8 KOs), from Philadelphia, who are expected to meet later this year.

This was a good statement from Conlan, who dominated through his technical skills and fast hands before a vicious finish.

Former European champion Takoucht, 34, from Ardennes, lasted just two rounds when he crossed the English Channel last October to challenge Warrington for the IBF world featherweight title. He lasted longer in his return to the U.K., but Conlan dominated throughout, except for two hiccups with points deductions for low blows.

Conlan opened up with a variety of combinations, targeting the body in particular, but his shots strayed too low on occasions and he received a third warning for low shots in the third round.

It did not deter Conlan from persistently attacking the body in the fourth, and Takoucht’s hands were beginning to drop from effects of the blows.

But later in the fourth, Conlan was penalized for a low right hand and deducted a point. It was low, which Conlan can have little to complain about, and the Northern Irishman threw another punch to the body well below the belt in the fifth round that earned him a second point deduction.

“I love to hit them on the sweet spot and it’s a fine line,” Conlan said. “It’s hard to adjust mid-fight. I’m experienced enough to know I can just go ahead.”

It left Conlan in a risky position and in danger of disqualification if he continued to misjudge his body shots. Conlan dug a left hook to the ribs in the seventh round that almost dropped Takoucht before an impressive finish in the last round. After a series of punches, Conlan landed a left to the head, followed by a right to the body and another left to the head that prompted a sensible stoppage.

At lightweight, Archie Sharp (19-0, 9 KOs) just held on to his unbeaten record by a 96-95 scoreline over fellow Londoner Jeff Ofori, and afterward admitted he needs to improve to be good enough to test the world elite.