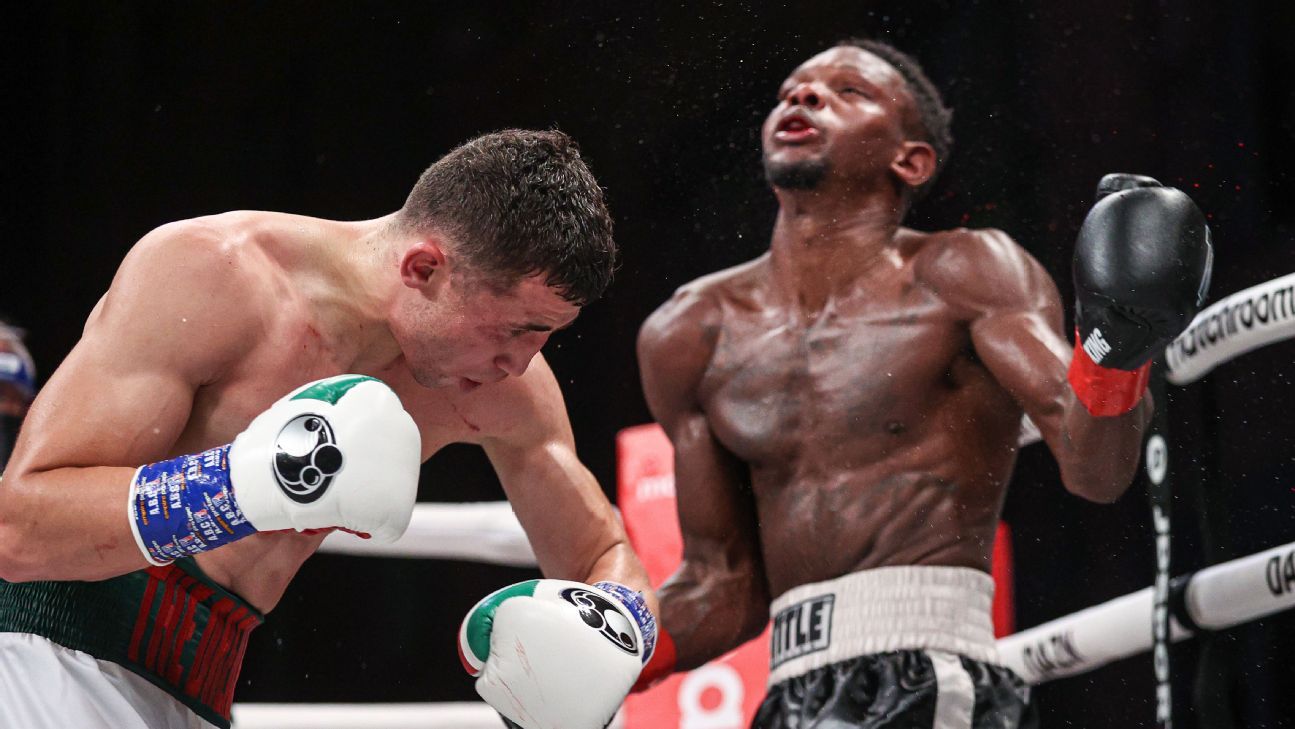 Carl Frampton and Michael Conlan scored TKO victories Saturday night in London, while David Benavidez, who lost his super middleweight world title on the scales on Friday, dominated Roamer Alexis Angulo. Benavidez expects to stay in the division to recapture his belt.

Jessica McCaskill scored an upset and dethroned Cecilia Braekhus to become the undisputed welterweight champion of the world.

But a full day of boxing was also a day of bad decisions — one by judges, another by a referee.

So what did we learn on Saturday? Are Frampton and Conlan ready to go for a title in their next fight? What are their options? Can Benavidez regain his belt at 168? Is McCaskill for real?

Steve Kim, Nick Parkinson and Ben Baby break it down.

Is Michael Conlan ready for a title shot? What are his best options?

Parkinson: Yes, he was ready yesterday. Conlan looked slick with no sign of ring rust after nine months out, except for the low blows, which are adjustable issues rather than deep concerns.

Conlan dismantles opponents with his variety of punches and movement, but he can also finish as he proved against Takoucht. Conlan might have only had 14 professional fights, but he fought at two Olympics and, at 28, he is in the peak of his career with technique unequalled among his other rivals at 122 pounds. Conlan beats either Angelo Leo or Stephen Fulton for the WBO belt, and can then go on to establish himself as junior featherweight No. 1 via unification title fights. Conlan says he makes 122 easy, but he is big in that class and we will have to wait and see how long he can stick around at junior featherweight.

Kim: Yes, it’s time for Conlan to step up. His style isn’t hasn’t impressed against the second and third-tier level opponents he’s faced thus far. In decisions like switching from trainer Manny Robles to Adam Booth, much of his professional career has been about finding his in-ring identity. Conlan was actually laying a very good foundation with a consistent body attack during the first half of the fight against Takoucht, but after he was penalized twice for low blows, referee Steve Gray became much more of a threat than Takoucht to defeat him.

Conlan wants to move down to junior featherweight and he’s already ranked No. 3 by the WBO, whose 122-pound title was recently won by Angelo Leo. Leo, who faces Stephen Fulton next, has a come-forward aggressive style and would be a favorable opponent for Conlan, who would be forced to hold his ground. That would be the quickest and most logical option for a title shot.

Can Frampton compete at 130 pounds after how he fought on Saturday?

Parkinson: Yes, I believe Frampton will beat Jamel Herring for the WBO belt later this year, despite the size disadvantage. Frampton has too much quality and experience, as he showed by suddenly turning the fight against Traynor with perfectly delivered body shots. He demonstrated he could beat someone with similar dimensions in the way he took out Traynor, but Herring will be a harder examination of whether Frampton is big enough and strong enough to compete at junior lightweight. I’m not sure Frampton can dominate in that division as he did at junior featherweight and featherweight. Frampton beat Leo Santa Cruz in 2016 to become the No. 1 featherweight fighter in the world, one fight after he had unified world titles at 122. Can he beat Miguel Berchelt, the WBC champion and ESPN’s No. 1 at junior lightweight? We will know better once he fights Herring.

Kim: I wouldn’t take too much out of tonight’s performance from Frampton. He came in just under the lightweight limit (at 134.5 pounds) and looked sluggish in the early rounds against a late replacement opponent. I’m sure we’ll see a much more motivated and conditioned Frampton when he faces Jamel Herring (who still has to take care of business on Sept. 5) for the WBO junior lightweight title.

While fighters always give the cliche answers about taking every fight seriously, there are certain fights that they take extra seriously, and their mental and physical preparation is heightened. This one tonight was your classic tune-up fight, and Frampton’s approach showed that. He’ll be at a higher level against Herring in his attempt to become the first Irish boxer to win a title in a third weight class.

A night of bad calls

But in reality, the fight should’ve ended in the ninth round, as Madrimov uncorked a big left hand that sent Walker to the canvas. Referee Gary Ritter believed that Walker was shoved to the canvas by Madrimov, who hurled himself forward into Walker as he threw the punch.

The television replay showed Walker was struck clearly by Madrimov’s punch, but not shoulder. Walker was given time to gather himself, and the fight ultimately resumed. That bad call would’ve been an issue if the fight was closer, but what took place instead was a bit dangerous, as a clearly dazed Walker took a pretty good beating at the end. Madrimov was robbed of a knockout victory. And Walker ended up taking a late shellacking for it.

It could be time for all boxing commissions to follow Nevada and adopt instant replay. It would’ve been hugely beneficial tonight and it would have protected the boxers.

Baby: The “slip” in the Israil Madrimov-Eric Walker fight was somewhat understandable. A look at the replay shows how the referee thought Walker was shoved down instead of settling on the canvas after a clean punch. However, it’s clear that it should have been a knockdown, and fortunately, it had no bearing on the decision.

What happened in Rolando Romero’s fight against Jackson Marinez is a completely different story. Somehow, Romero won a unanimous decision, including an egregious 118-110 scorecard from judge Frank Lombardi, which was completely indefensible. By the 12th round, it appeared as if Marinez was clearly ahead. He had a lot of success throwing straight shots at range as Romero’s defensive plan of pulling straight back was unsuccessful.

I imagine the decision will go more or less unnoticed because it was on the undercard on a fight card that wasn’t the biggest in combat sports Saturday night. And as a sport, boxing should be grateful for that, because it’s these types of decisions that hurt the sport’s reputation. The disconnect between what seems apparent and what actually occurs remains deeply troubling.
In his post-fight interview on Showtime, Romero rattled off a list of champions as to who he wants to face next despite picking up a very questionable win. Romero also scoffed at the notion that Marinez was effective on Saturday night.

“He did nothing,” Romero said in the Showtime interview.

According to CompuBox, Marinez threw 120 more punches and was nearly as effective as Romero (Romero outlanded Marinez by 0.5 percent). Between Romero and Lombardi, I’m not sure who was more delusional on Saturday night.

The end of the road for Braekhaus?

Baby: Give McCaskill a ton of credit. She did what so many others have failed to do — she defeated Breakhaus and swiped all four major welterweight belts in downtown Tulsa, via majority decision.

It ends a great run for Braekhaus, who had no qualms about the decision despite the two scorecards for McCaskill being arguably a little wider than anticipated. But McCaskill found ways to negate the height disadvantage and land clean shots throughout the night.

Much of the buildup during the DAZN telecast centered on a potential match between the winner of Braekhaus-McCaskill and Katie Taylor-Delfine Persoon II. If Taylor wins, it could set up a rematch against McCaskill. In 2017, Taylor rolled in a lopsided unanimous decision. Now that McCaskill has more experience against better competition, she could be better prepared for whomever she faces next.

Kim: After 37 professional contests, “The First Lady of Boxing” finally suffered her first defeat against the determined Jessica McCaskill.

The fight was close, but this version of Braekhus is clearly a fighter in physical decline.

Yet, what was most noteworthy was the class Braekhus showed in defeat. It couldn’t have been an easy situation for her, but she handled it with great aplomb and grace. She didn’t give any excuses or ask for an immediate rematch.

Anyone that knows Braekhus wouldn’t have expected anything less.

Is Benavidez still the best super middleweight boxer in the world?

Baby: This was supposed to be an easy title defense for David Benavidez. But because he came in well overweight for the weigh-in on Friday, he forfeited his WBC super middleweight title and subsequently did the best he could do against Roamer Alexis Angulo.

Benavidez salvaged his first fight since the start of the pandemic with a dominating stoppage. From the outset, Benavidez maximized his height and weight advantage. He picked Angulo apart from the outside and was increasingly effective as the fight progressed. By the 10th round, Angulo could do nothing but hide behind his guard as Benavidez picked his shots and landed with ease. Angulo’s corner made the right decision in stopping the type of fight that can do some serious long-term damage.

It was a good win for Benavidez. However, being overweight was the most significant storyline of the weekend. He needs to be more disciplined if he wants to be considered the top super middleweight in the division.

Kim: No. Benavidez might have the most talent, but part of being a super middleweight is very simple: the actual ability or willingness to make the 168 pound limit.

Say it with me again — if you can’t make 168, you’re not the best super middleweight.

And it’s difficult, if not illogical, to give that distinction to anyone that has now lost two titles in the manner he has. Discipline isn’t just a trait, it’s a skill. And for fighters, it’s perhaps as important as having great hand speed or bruising power.

Some will go off the “eye test” with Benavidez. Fair enough, as he has a lethal offensive arsenal, but as you look at Benavidez’s record, he hasn’t done nearly enough to be given that benefit of the doubt.