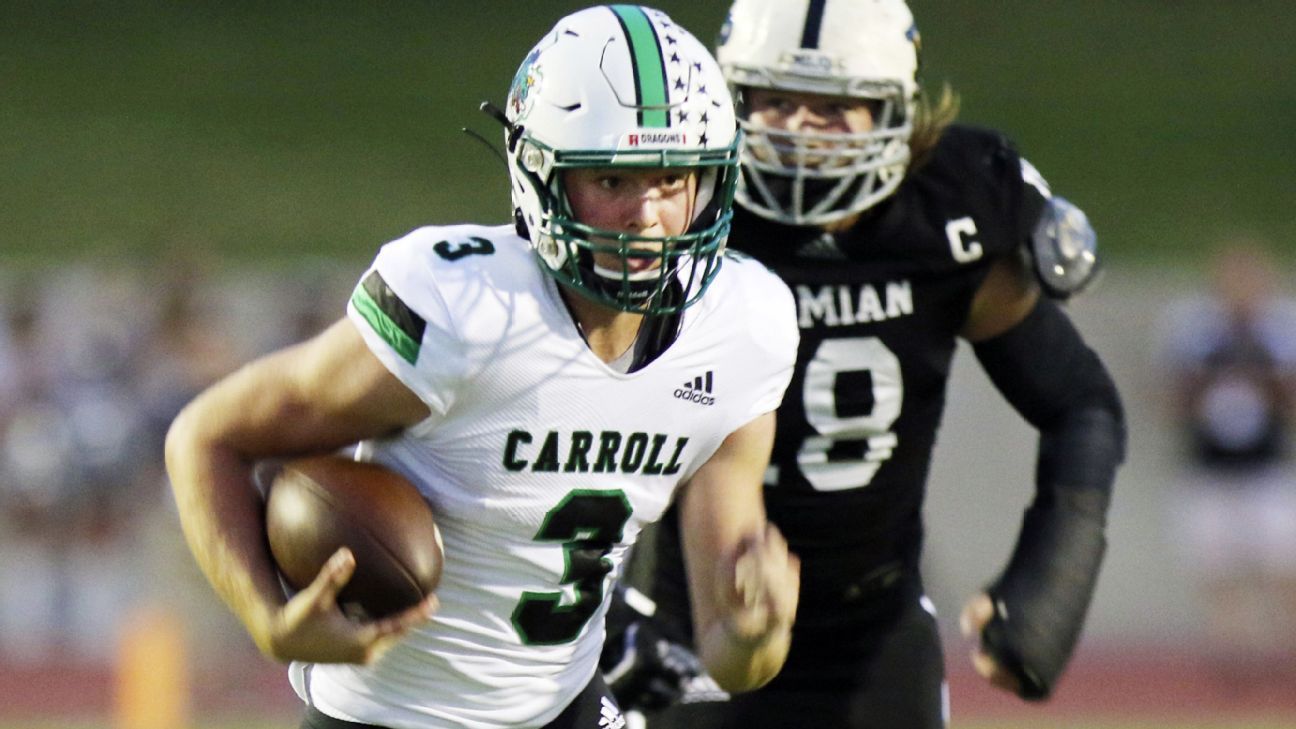 Quarterback Quinn Ewers, the No. 1-ranked prospect in the 2022 ESPN Junior 300, is staying home for college.

The Southlake Carroll quarterback committed to Texas over Oklahoma and Ohio State on Friday, becoming by far the biggest recruiting win for the Longhorns in the Tom Herman era.

“Playing for Texas has been my dream for as long as I can remember.” Ewers said.

Ewers put together the most talked-about sophomore season for a quarterback in the Lone Star State since Kyler Murray. The 6-foot-3, 205-pound natural passer completed 72.4% of his passes as a first-year starter, throwing for 4,003 yards and 45 touchdowns with just three interceptions.

Ewers was even more efficient in the playoffs, averaging 356 yards passing per game with 17 touchdown passes without an interception in four games. More than just a pocket passer, he rushed for 568 yards and nine scores in 2019.

Offers began piling up during and after his sophomore season. Along with offers from Texas, Oklahoma and Ohio State, many of the nations top programs — Alabama, Auburn, Texas A&M, USC, Florida, Georgia, LSU, Miami and Michigan among them — pursued Ewers, who is the latest in a long line of highly recruited Southlake Carroll quarterbacks.

Ewers becomes the second commitment in the 2022 class for Herman, joining ESPN 300 wide receiver Phaizon Wilson, who committed on July 31. The commitment of Ewers is expected to help the Longhorns push for an extremely talented class of in-state skill prospects in the 2022 class, which includes running back Jaydon Blue and receivers Evan Stewart, Caleb Burton, Armani Winfield and the blazing fast Brenen Thompson.

The commitment of Ewers continues an uptrend in highly ranked quarterback talent headed to Austin under Herman. The Longhorns signed No. 40 overall Hudson Card in the 2020 class, along with versatile QB/ATH Ja’Quinden Jackson. Jalen Milroe, ranked No. 110 overall in the 2021 ESPN 300, also committed to the Longhorns.

Ewers will become the first No. 1 prospect to sign with the Longhorns in the 16 years that ESPN has ranked recruits. Texas has signed the No. 2 prospect twice — Jackson Jeffcoat (2010) and Johnathan Gray (2012). Jordan Hicks, who was No. 4 overall, signed with Texas in 2010.

The last No. 1-ranked prospect overall to sign with the Longhorns was Vince Young in the Class of 2002.