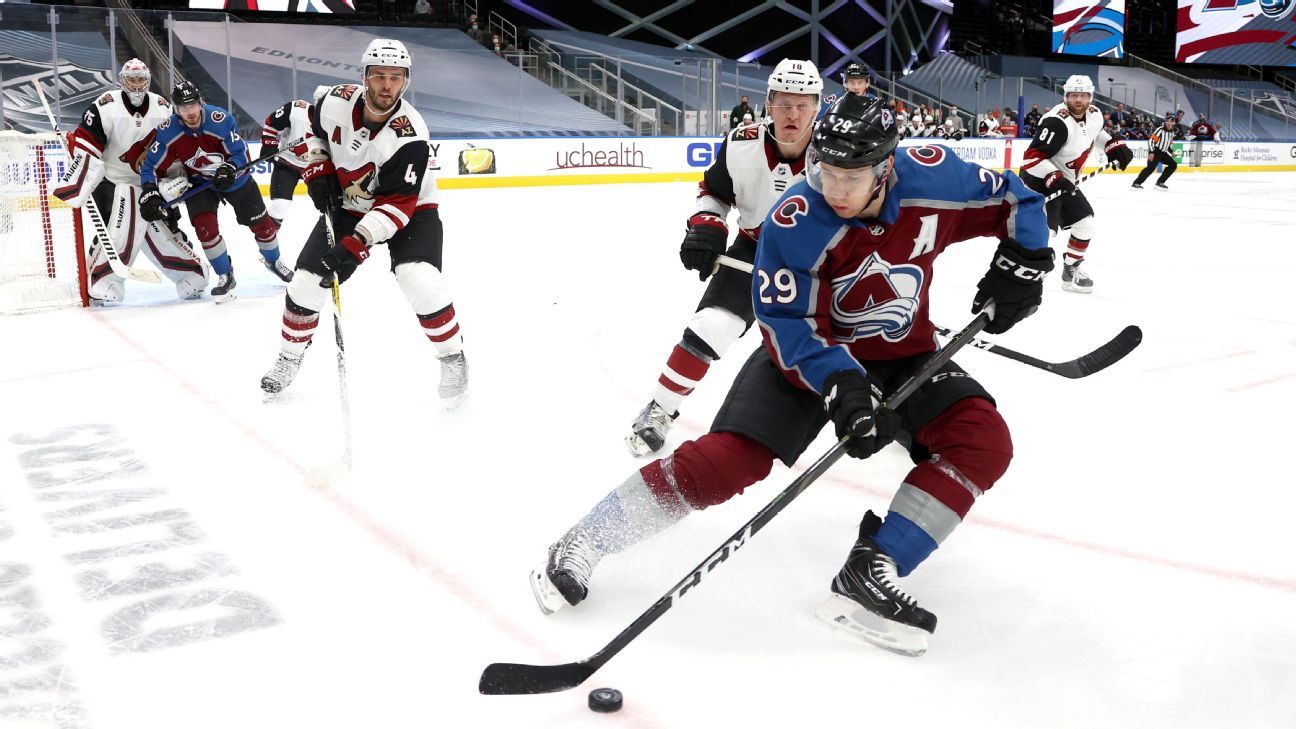 The Stanley Cup champions from 2018 (Washington Capitals) and 2019 (St. Louis Blues) are both in an 0-2 hole after Friday. The team that won in 2016 and 2017 (Pittsburgh Penguins) has already been eliminated. It sure feels like there’s going to be some new blood winning this summer. We also got our eighth straight day of overtime hockey. It’s hard to complain when the drama is this good.

Today’s slate includes two series tied at 1-1, and two others where one team is hoping to avoid falling down 0-3.

Tuukka Rask gets the start for Boston on Saturday — his third game in four days. Rask also made news this week for comments comparing the empty arena atmosphere to exhibition games; that got everyone up in arms for about 24 hours. The big question for the Bruins: Is David Pastrnak available? Bruce Cassidy said Pastrnak didn’t skate Friday. “He could still possibly play tomorrow,” Cassidy said. “But with the 12 o’clock game, there’s no real opportunity to test it in a morning skate like your typical [night] game. We’ll make that evaluation in the morning.” Hurricanes Rod Brind’Amour probably won’t (or, rather shouldn’t) challenge another call anytime soon; he’s already 0-for-2 in the series.

Just 24 hours after a hard-fought game Game 2, these teams are at it again. One player not dreading the short turnaround: Nathan MacKinnon. When asked by a reporter on Friday if he was worried about being tired tomorrow, the Avs star quipped: “No. It’s why I win fitness testing every year. I’ll be buzzing.” Arizona coach Rick Tocchet was proud of his team’s response after a lackluster Game 1, saying he believes his team will go down swinging. He also has to like that they had more shots in the second period (15) than they did in all of Game 1.

We’re getting to the point of the bubble where Jon Cooper is showing up at press conferences in Aerosmith t-shirts because, as he said, he’s running out of clean clothes. His team ran out of a little steam following the epic five-overtime game, as they recorded 37 shots against Joonas Korpisalo, but not too many quality scoring chances. It’s tough to get past Korpisalo, who had a save percentage of .956 against the Toronto Maple Leafs and improved it to .962 since. Sounds like it’s going to be the Korpisalo show for a while. With Elvis Merzlikins still unfit to play, the Blue Jackets have called another goaltender (Veini Vehvilainen) into action as the understudy.

Vegas has Chicago backed into a 0-2 hole, and Robin Lehner (whom the Blackhawks traded away in February) has yet to lose a game since becoming a Golden Knight. But with back-to-back games coming up, Lehener is likely to sit one, giving Marc-Andre Fleury a chance to make his quarterfinal round debut. Max Pacioretty and Tomas Nosek are both iffy, meaning Vegas might have to look to its spare forwards in Game 3. In Chicago, rookie Adam Boqvist was scratched for Game 2, but sounds like he’ll draw back into the lineup today. This playoff tourney is all about getting the young Blackhawks experience. “We’re hoping Boqy, with a day of rest, can come back, potentially, with another level for us,” coach Jeremy Colliton said.

After his team mustered just 14 shots on goal in Game 1, Coyotes coach Rick Tocchet was not happy with his team, lamenting it’s “Darcy, Darcy, Darcy [Kuemper] and that’s it.” Arizona showed up in Game 2. “We were in their face today,” Tocchet said. “We had a good game, we could’ve won that hockey game. That’s more of our style. You’ve got to go down swinging.” The third goal was just elusive. Nathan MacKinnon scored a beauty to get the Avs up early, and Andre Burakovsky scored the game winner. But let’s note that Nazem Kadri has posted a point on all four of the game-winning goals scored by the Avalanche this postseason. Full recap

Nazem Kadri’s shot attempt goes off a Coyotes defenseman’s skate and right to Andre Burakovsky, who breaks a tie in the third period for the Avalanche.

With coach Claude Julien at home resting after undergoing a heart procedure, Kirk Mueller assumed head coaching duties. He shuffled the lines up a bit and Montreal looked creative and fast on offense. Tomas Tatar and Jesperi Kotkaniemi (a breakout star this summer) both scored twice. The Flyers simply came out flat, and Carter Hart had very little help before being pulled in the second (at 4-0). But Alain Vigneault wasn’t too pleased that Muller put his No. 1 power play on the ice late in the game: “We had embarrassed ourselves enough. I’m not sure we needed to be embarrassed more.” Vigneault said he’ll be sure to point that out to his players. It’s funny that he’s concerned about the Canadiens’ (typically lackluster) power play of all things, but hey, it did score in back-to-back games. 2020 is crazy! Full recap.

The Blues have yet to win a game this summer, and need to channel some energy from last year’s team, which went 9-2 in the postseason following a loss. “Is it frustrating? Yeah, sure. But I don’t really care about what people say outside of our locker room,” Blues captain Alex Pietrangelo said. “We had a lot of noise last year, and look what we did. It’s a new year, obviously. We don’t want to keep dwelling on last year, but the core of this group went through that together. We know how to bounce back from these things.” Jordan Binnington gave up four goals on 25 shots (.840 save percentage), which is not ideal. The Canucks’ offense is clicking. Since being shutout by Minnesota in Game 1 of the qualifying round, Vancouver has 21 goals in its last five games. Full recap.

Stay up-to-date with scores, schedule, team updates and much more.

Alex Ovechkin scored his first two goals for the Caps this summer — including a goal less than a minute into the game — but he’ll probably be haunted by a miss in the third. The Caps were doomed by penalties and turnovers, as well as the Isles going on a three-goal outburst in the span of 3:58 in the second period. Washington is hopeful Nicklas Backstrom (concussion protocol) can come back for Game 3, but we’ll have to stay tuned. The Isles have dominated Washington in this series at even strength, recording 24 high-danger shot attempts compared to Washington’s 10, per Natural Stat Trick. Full recap.

There was definitely a dropoff in intensity level after the two teams played their second game in as many days. Mikael Backlund scored a short-handed goal to open the scoring in the second period — the second straight game the Flames scored a shortie. It was a frustrating turn for the Stars, who dominated the period (a 33-6 advantage in shot attempts, per Natural Stat Trick) but had nothing to show for it. In fact, Dallas outplayed Calgary for all three periods, making Friday’s loss extra frustrating. The Flames played the game without Matthew Tkachuk, but Flames coach Geoff Ward said he is hopeful the winger can return for Game 4. Full recap.

The captain scored two goals on Friday, including the overtime winner, to give the Canucks a win. The latter was Horvat’s fifth goal of the postseason, which ties him with Connor McDavid for the most this summer.

The 33-year-old got the nod in net and made the most of it, recording a 35-save shutout — his second shutout of the postseason and fourth playoff shutout of his career — to help his team to a 2-1 series lead.

At 20 years, 39 days, Kotkaniemi is the second youngest Canadiens player to record a multi-goal game in the playoffs. He trails only Henri Richard who, at 20 years and 27 days, scored twice in Game 7 of the 1956 semifinals against the Rangers.

Random pregame ritual of the day

Just going to leave this here.

Whiff of the day

“Typically when you hear comments like that, the team has usually lost.” — Vegas coach Peter DeBoer, throwing some shade at Boston goalie Tuukka Rask, who said the crowdless games have the intensity of an exhibition game.