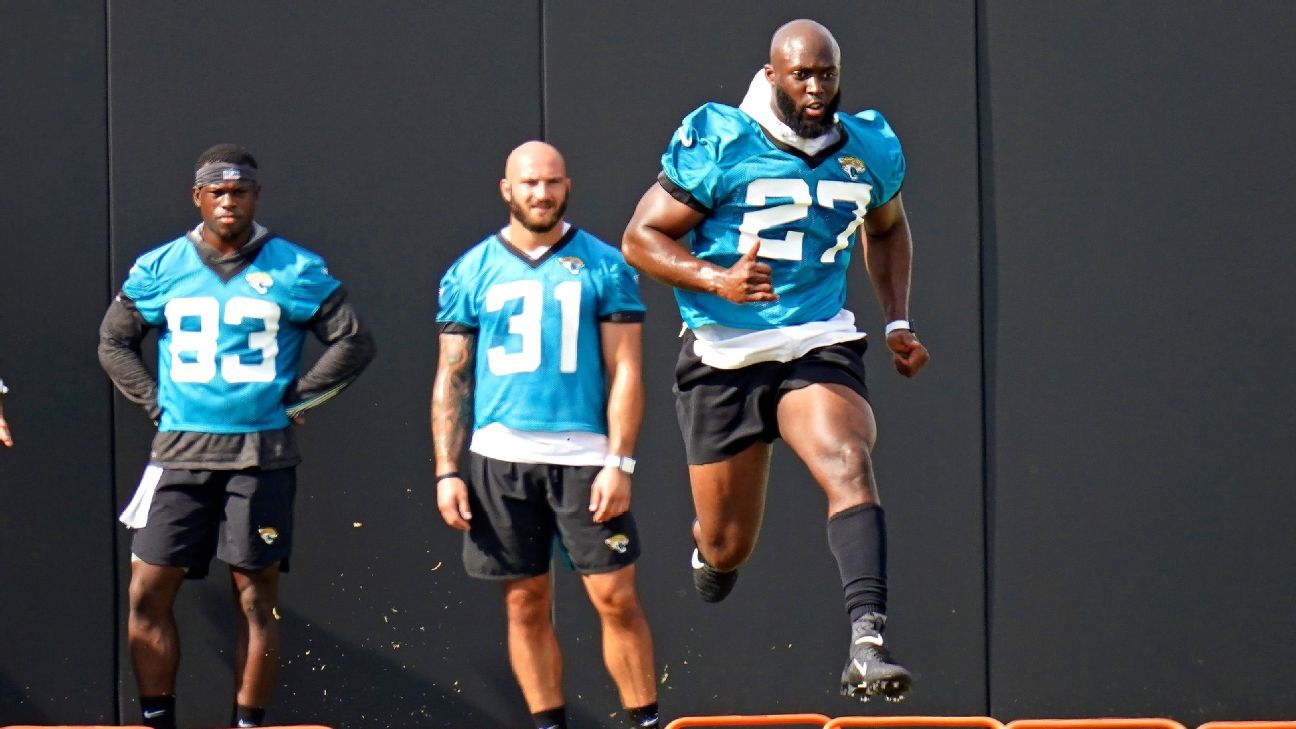 Gets angry when things don’t go his way on the field. Doesn’t take football seriously.

Jacksonville Jaguars running back Leonard Fournette has been described these ways at one point or another over the past three years. It’s obviously not the kind of reputation anyone — not just a football player entering a contract year — wants.

Fournette says the reputation is undeserved and completely wrong.

He reinforces that by relaying what he said newly signed running back Chris Thompson told him when they first met earlier this spring: “He said, ‘You ain’t nothing like people say you are,’” Fournette said. “[Thompson thought] I was always upset about things. Most of you guys know I’m always joking and playing; that’s just me. I think it kind of got out of hand, so I just wanted to get that out there.”

Fournette admits that his attitude after some games hasn’t been the best — especially after losses, mainly because there have been a lot of them. There were a combined 21 in 2018 and 2019, which piled up just after the Jaguars came within 10 minutes of making the Super Bowl in Fournette’s rookie season.

His postgame answers were short and blunt. It was easy to see that he either believed he wasn’t given the ball enough, the offense didn’t stick with the run game long enough or he wasn’t happy with a playcall.

“At the end of the day, I want to win,” Fournette said. “Who doesn’t want to win? I came from a 2017 season with a team who was 10-6, we had [a good] talent level and then the next couple of years went down the drain. So I just want to address a lot of things, too, especially since the media came out and said I was an angry guy. No. 1, would you be angry if you’re losing week in and week out? That is one of my biggest problems; I do get upset when we lose and it takes me a while to get over it. I expect, just like anybody else, if you put the work in, you want the W, but a lot of times last year it didn’t go like that.

“I guess they kind of misinterpreted that, and don’t get me wrong, I was upset from the losing, but that’s just the winner in me. That’s any guy who plays this professional level of sports.”

Left tackle Cam Robinson said Fournette is not the only player who is angry about losing, but Fournette is so high profile that people pay more attention to his comments and demeanor after games.

“Absolutely, he gets a bad [reputation], but I just look at it as control what you can control.”

Unfortunately for Fournette, it’s incredibly hard to change the public narrative once you get a bad reputation. And it’s not hard to see how it started.

&• Jags’ Leonard Fournette: ‘I’m not a jerk’
&• Jets need ‘commander’ Sam Darnold
&• What to expect from Kirk Cousins in ’20
&• Top CB? Try Packers’ Jaire Alexander
&• Coaches are higher risk but not opting out

Fournette was inactive for one game as a rookie for leaving the team early during the bye week and missing the team photo. He didn’t completely pick up the offense — quarterback Blake Bortles was still telling him where to line up late in the season — and there were reports that he slept in some meetings. Still, he was a large part of the team’s first AFC South Division title, first playoff appearance since 2007 and run to the AFC Championship Game. He ran for 1,040 yards and nine touchdowns and another 242 yards and four touchdowns in three playoff games.

Fournette missed seven full games and half of two others with hamstring and foot injuries. There was some frustration inside the building about the length of his absence with the hamstring injury. He also gained nearly 20 pounds during the season.

He was suspended for a game after coming off the bench and punching Buffalo defensive lineman Shaq Lawson. The team told him it was not going to guarantee the rest of his contract because of that suspension.

Fournette also was caught on video yelling at a fan in the stands during a lopsided loss in Tennessee that December. Fournette said several days later that a fan used a racial slur, a claim that teammate T.J. Yeldon corroborated.

Then-executive vice president of football operations Tom Coughlin released a statement criticizing Fournette (who was inactive because of a foot injury) and Yeldon for sitting alone on the bench and acting disinterested during the season finale.

In April 2019, Fournette was arrested for driving with a suspended license (which somehow warranted a local television station using its news helicopter), for which he eventually paid a $303 fine.

Fournette rebounded with a good 2019 season: 1,674 yards from scrimmage and a team-high 76 catches before missing the season finale with the flu. In March, he got people talking again when he said on Instagram that the Jaguars should sign free-agent quarterback Cam Newton, which angered some fans because they viewed it as a slap in the face of incumbent starting QB Gardner Minshew.

Fournette later explained that he believed Newton’s experience as a former league MVP and Super Bowl quarterback would help the Jaguars win and that he meant no disrespect to Minshew, who led the Jaguars to a 6-6 record as a rookie replacement for Nick Foles.

Fournette wasn’t helped by the fact that a month later, the Jaguars let it be known they were willing to trade him before the 2020 draft. They didn’t get a single offer. And then they announced they wouldn’t be picking up his fifth-year option, either.

So here he is, heading into the final year of his contract. It’s a prove-it season with the added distraction of the coronavirus pandemic, which puts the league in unprecedented territory. Jaguars coach Doug Marrone and general manager Dave Caldwell have nothing but praise for how Fournette has handled himself so far.

Caldwell said he spoke with Fournette about not picking up the fifth-year option and the potential trade and it was a positive conversation. And he agrees with Fournette that he’s gotten a bad rap about his attitude.

“Leonard is in a good spot,” Caldwell said. “We have had conversations, and I think he does not like losing, like the rest of our players on our team. They all handle it in their own way, and I would agree with what he said.”

Fournette doesn’t seem to get as much credit for the good things he has done as he gets for the negative things. For instance, he donated 56,000 meals over a two-month span in the New Orleans area this past March. He donated $50,000 to J.J. Watt’s fundraising effort in 2017 to help those in Houston recover from Hurricane Harvey.

He partnered with a nutritional supplement brand to donate funds to help Jacksonville’s Raines High School football team purchase state championship rings and jackets. He also donated several of his numerous football trophies, which were melted down and turned into a set of weights for the same team.

Do an internet search for “Fournette” and “cleats” and there are several stories and videos of him giving his cleats away, especially to kids. Fournette helped a student trainer at LSU, Jhane Nichol, by paying the rest of her tuition after she started a GoFundMe effort looking for help.

Those good deeds seem to be forgotten when it comes to Fournette. Those in the public eye are sometimes not the way they are perceived by those on the outside. There are multiple layers to who they are, and unfortunately, the negative oftentimes seems to take over the narrative.

Fournette understands that’s the way things work, especially with the instantaneous reactions on social media. But he doesn’t like it.

“I’m not a jerk, but when it comes to football and winning, I’m all-in for that,” he said.