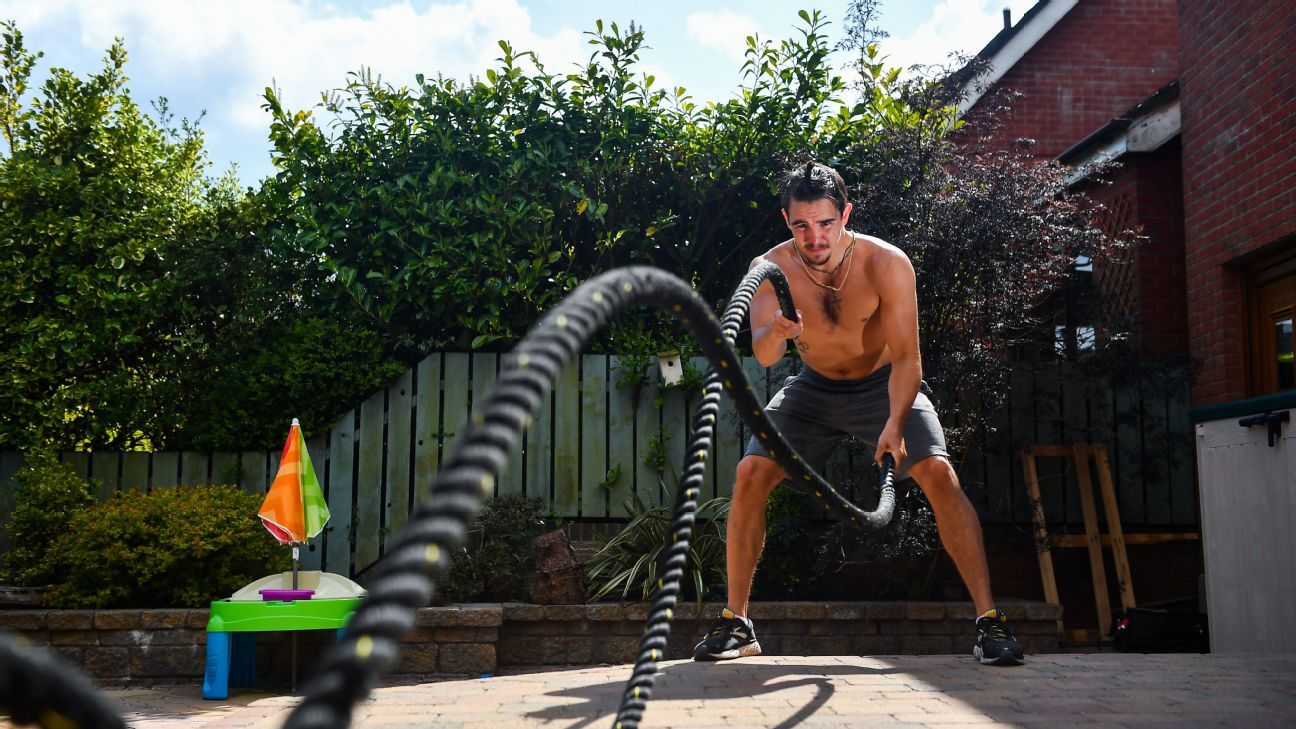 The fight schedule rolls on this weekend, and the stakes are high with three world title fights, a title eliminator and the return of some of the sport’s big names for the first time since the coronavirus pandemic put a stop to the action in early March.

The action kicks off Friday with the third edition of Matchroom’s Fight Camp in England (DAZN, 2 p.m. ET) with middleweights Felix Cash (12-0, 8 KOs) taking on Jason Welborn (24-8, 7 KOs) in the main event.

Cash, 27, is an aggressive and quick fighter, and the veteran Welborn, 34, a former British middleweight titleholder, is trying to get back on track after consecutive losses, including a fourth-round KO when he challenged Jarrett Hurd for the WBA and IBF junior middleweight world titles on the Deontay Wilder-Tyson Fury I undercard at the Staples Center in Los Angeles in 2018.

Logic says that Cash will win handily, perhaps by mid-to-late round stoppage. And he is certainly brimming with confidence.

“He may have the experience over me but I’ve got the skill,” Cash noted in a news release Tuesday. “He’s going to need to be the very best he can be. He’s going to have to raise his game, and I hope he does. He’s a tough, strong and game lad. He’s been around for a while and fought for world titles. I’m here to take on all challengers and take them all out. It will be a good fight while it lasts.”

Frampton (27-2, 15 KOs) was originally scheduled to face Vahram Vardanyan, but Vardanyan wasn’t able to secure a visa to travel from his home of Latvia to the U.K. and was replaced by Traynor (16-3, 7 KOs).

“I’m delighted to get an opponent over the line,” Frampton said via a news release. “I have to credit MTK Global for seeing there could have been issues with the original opponent getting into the country, and they have been paying Darren Traynor for a number of weeks to train [as a backup].

“He’ll be in decent shape and will be up for it as well. There is no pressure on him, but it is up to me to look good.”

This is really a stay-busy fight as Frampton looks ahead to a potential bout against WBO junior lightweight world titlist Jamel Herring (who has his own business to take care of against Jonathan Oquendo on Sept. 5). A fight against Herring would be an opportunity for Frampton to win a major title in a third weight class, something no Irish fighter has accomplished.

In the co-main, Michael Conlan faces Sofiane Takoucht in a 10-round featherweight battle.

Conlan was scheduled to be involved in one of the very first cards to be postponed because of the pandemic, on March 17 at the Hulu Theater at Madison Square Garden in New York.

“It’s been fantastic,” he told ESPN last week. “It’s the longest I’ve been able to be home with family, with my kids.”

Since age 17, Conlan has consistently been on the road, traveling to amateur tournaments, engaging in training camps, competing in the 2016 Olympic Games and just generally being away from home for long stretches since becoming a professional.

While the fight against Takoucht (35-4-1, 13 KOs) will be at featherweight, Conlan will soon be campaigning as a 122-pounder. He is already rated third by the WBO at junior featherweight.

“I would love to fight on a co-promotion against one of the PBC champions [on the Fury-Wilder III undercard], whether it’s going to be [Stephen] Fulton or Angelo Leo, who is the current champion,” Conlan said.

Leo won the vacant title by defeating Tramaine Williams by unanimous decision on Aug. 1, and must fight Fulton within 180 days.

“If they fight each other before then, hopefully I can face one of them on that card,” Conlan said.

Taking it to the street in Tulsa

A fight for the undisputed welterweight world championship will take place on the streets of downtown Tulsa, Oklahoma, as champion Cecilia Braekhus (36-0, 9 KOs) faces Jessica McCaskill (8-2, 3 KOs) in a fight that was originally scheduled for April 17 (DAZN, 8 p.m. ET).

“I’ve been doing this a long time and I know the drill, it’s not the first time a fight has been canceled for me,” Braekhus said via a news release. “Of course, these are some extraordinary circumstances, but as soon as the fight was off, we wound down a little bit and had some time off before slowly starting back up again. I think we’ve done the right thing, we haven’t overtrained, but we’ve stayed in shape.”

This is Braekhus’ second fight under the guidance of trainer Abel Sanchez in the mountains of Big Bear Lake, California.

“Being in Big Bear for so many months has given me another life in boxing,” said Braekhus. Before I have been in meetings, on the phone, flying back and forth, L.A.-Norway, Norway-L.A. I’ve been completely focused on my boxing and I am in the best shape. I cannot remember the last time I was in such great shape and I cannot wait for Saturday.”

The co-feature is a junior middleweight contest between Israil Madrimov (5-0, 5 KOs) and Eric Walker (20-2, 9 KOs) in a WBA eliminator.

If Madrimov wins as expected, he will be officially in line for a WBA title shot. But the question is who that will be against? The WBA has Jeison Rosario (who is also the IBF belt holder) as its “super” champion, Erislandy Lara as the “regular” champ, and Michel Soro as the organization’s gold titleholder.

Kauffman will be fighting with a heavy heart after the loss of his trainer Naazim Richardson, who died in late July after a lengthy illness.

“He meant everything to me,” said Kauffman, who will have his father, Marshall, and James Cooper in his corner this weekend. “He was my peacemaker in the corner between me and my dad because we tend to argue a lot. He was my motivator, he was someone who truly made me believe in myself because I lack a lot of confidence, even though I’m good and I can fight.

“He helped me believe in myself a lot more than anyone else we worked with.”

His ring attire will play tribute to Richardson.

Kauffman couldn’t travel for Richardson’s funeral. But he said, “I made sure I paid for everything, the expenses, whatever, the funeral, so that he could go to his final resting place. I made sure I took care of it.

“I’m not a millionaire, I’ve never made a million dollars in my life, but he was that important to me. So I felt the least I could do is pay for his viewing. So that alone is honoring him.”