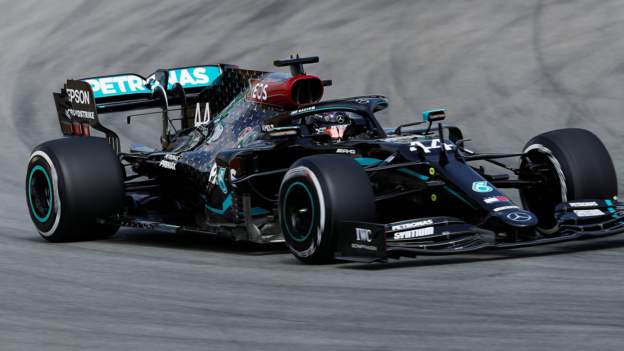 Hamilton was 0.287secs up on Bottas in the second session after Bottas topped the first by 0.039secs. Red Bull’s Max Verstappen was 0.821secs off in third.

Renault’s Daniel Ricciardo was fourth fastest, ahead of the surprising Haas of Romain Grosjean in fifth.

The Racing Point of Sergio Perez, returning after a two-race absence because he contracted coronavirus, was eighth fastest, from Renault’s Esteban Ocon and Alpha Tauri’s Pierre Gasly.

Ferrari’s Sebastian Vettel, who has a new chassis this weekend after a crack was discovered in his old one after the last race at Silverstone, was 12th, 0.3secs behind Leclerc.

And Red Bull’s Alex Albon was 0.8secs off team-mate Verstappen in 13th.

Lando Norris was 14th in the second McLaren and George Russell, who missed the first session while Williams development driver Roy Nissany drove his car, slowest of all, complaining of a lack of front grip.

Apart from Bottas running wide during his race-simulation run later in the session, it was an uneventful afternoon.

Mercedes technical director James Allison said the team had the tyre temperatures more under control than they had at Silverstone last week, when extreme tyre wear led to Mercedes being beaten by Verstappen, despite the high temperatures at the Circuit de Barcelona-Catalunya.

He added that the race pace of their cars and Verstappen was closely matched.

Hamilton said: “It is quite tough out there. It is the hottest I have experienced in Spain – normally we come here in February and May. It’s beautiful weather but it’s a killer in the car.

“It has been a good day. The second session was better for me and the long runs we looked very close with the Red Bulls so I think it will be a close race.

Grosjean’s performance was the most unexpected, as the Haas has been struggling towards the back so far this year.

Grosjean’s session ended a few minutes early when he suffered a loss of power.