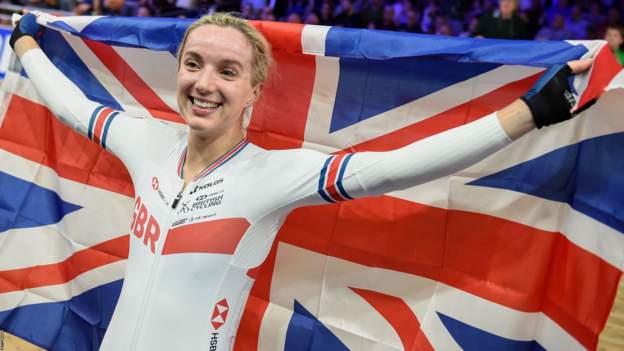 Barker feels her efforts would be viewed differently if she were a man.

“I would absolutely put myself in that two thirds,” Cardiff-born Barker told BBC Sport Wales.

“I would say I’ve experienced it again and again throughout my career. At least since I started cycling when I was 10.

“I think things are getting better. That said, I think there is quite a long way to go with people’s attitudes.

“I don’t necessarily get the same comments that perhaps I would if I was a man on my performances and on my career and any of my achievements, which can be quite frustrating.”

‘It’s ignorance, I think – that’s pretty much it’

As an example, Barker highlighted the opposition there has been to including the women’s madison in the Olympics.

“I think there are a lot of people that said it shouldn’t happen, which was very frustrating to hear,” Barker continued.

“And now it has started, there are a lot of people who already consider it’s going to be complete and utter carnage.

“What continues to frustrate me again and again is this assumption that when men crash in racing, it’s because they’re going as hard as they can, they’re pushing the limit.

“If they do something dangerous it’s because they’re in control, but they’re risking it all for the win.

“Whereas a lot of the time, if women crash it’s because of a lack of skill.

“That’s the assumption a lot of people make and say to female athletes in that race and don’t consider it to be offensive at all.

“It’s ignorance, I think. That’s pretty much it.”

The next Games – rearranged because of the coronavirus pandemic – are scheduled to take place next July and August, although uncertainty remains, with competitions around the world continuing to be postponed or cancelled.

“I don’t know [when I’ll next race],” Barker said. “It’s a tense time for everybody.

“The Road World Championships [in Switzerland in September] were just cancelled – and I think for a lot of people, that was the real safe bet. So even for people who weren’t going to the World Champs, it isn’t great news.

“It puts a lot of smaller races in doubt.

“We don’t know if we’ll get to the night before we’re supposed to go away on a training camp and restrictions come in and we can’t go. It’s the same situation for races. So it’s quite hard to plan in advance.

“If [the Olympics] doesn’t go ahead, I’m not going to think about that. If it could go ahead in any capacity, I think that’s the best thing that could happen.”

Sexism is one of many issues raised by the BBC Elite British Sportswomen’s Survey. BBC Sport will be shining a spotlight on the others with coverage throughout the week on the BBC Sport website, BBC Radio 5 Live and BBC TV. More information can be found here.