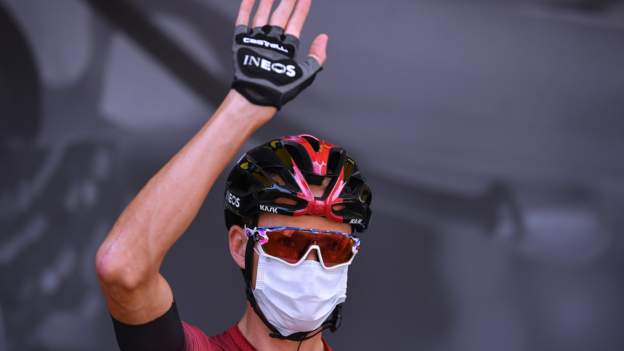 Froome has been some way off 23-year-old Colombian Bernal – the 2019 Tour winner – in recent warm-ups, as he tries rediscover his form.

Ineos have three former Tour champions to choose from for this year’s delayed showpiece, starting on 29 August.

Four-time Tour winner Froome, Bernal and British 2018 champion Geraint Thomas, 34, are all competing at the Criterium de Dauphine – the final warm-up event, which will help their team decide who to select for cycling’s biggest race.

Ineos’ policy is that whoever is the strongest rider going into the final week of any Grand Tour will be backed by the whole team, and they would be unlikely to want to take three riders to the Tour who would be considered team leaders.

Froome has signed a multi-year deal with Israel Start-Up Nation from 2021, after Ineos decided not to renew his contract.

He lost more time to Bernal during Thursday’s brutal mountainous second stage of the Dauphine, with the Briton now nearly 14 minutes behind.

“It’s incredible to be back in the peloton,” said Froome afterwards. “But keeping in mind I’ve only had a handful of days racing in over a year now, I’m feeling better and better as I do more days of racing.

“I’m feeling optimistic about the Tour.”

Bernal won the Route d’Occitanie, nearly 10 minutes ahead of Froome, on 4 August and ended 26 minutes ahead in last week’s Tour de l’Ain.

“Egan has done really well in Occitanie and Tour de l’Ain. We had a victory and a second place, so the whole team [at the Dauphine] is trying to look after Egan and try to put him in the best place to go for the victory,” added Froome.

“Every day is a test and every day is about pushing the condition. I’m really happy with the progress I’ve made so far – it’s been really encouraging.”

Meanwhile, Froome’s future team-mate Dan Martin has pulled out of Israel Start-Up Nation’s team at the Dauphine after discovering a small fracture in his lower back following a crash during stage two.

“I’m a fast healer and I have reason to remain optimistic I will be ready for the Tour,” said the 33-year-old from Ireland.

With Froome’s form falling way short of Bernal and Thomas as he recovers from terrible injuries sustained in a crash at last year’s Dauphine, it has looked increasingly likely he could be the rider to miss out.

That would be a real indignation for a man with such gravitas in the sport.

But Froome may yet cut his losses and offer to play ‘super-domestique’ to Bernal at the Tour in order to be there, rather than miss out completely.

He can then continue to rediscover his form at the top level and benefit should anything happen to the reigning champion during the race.