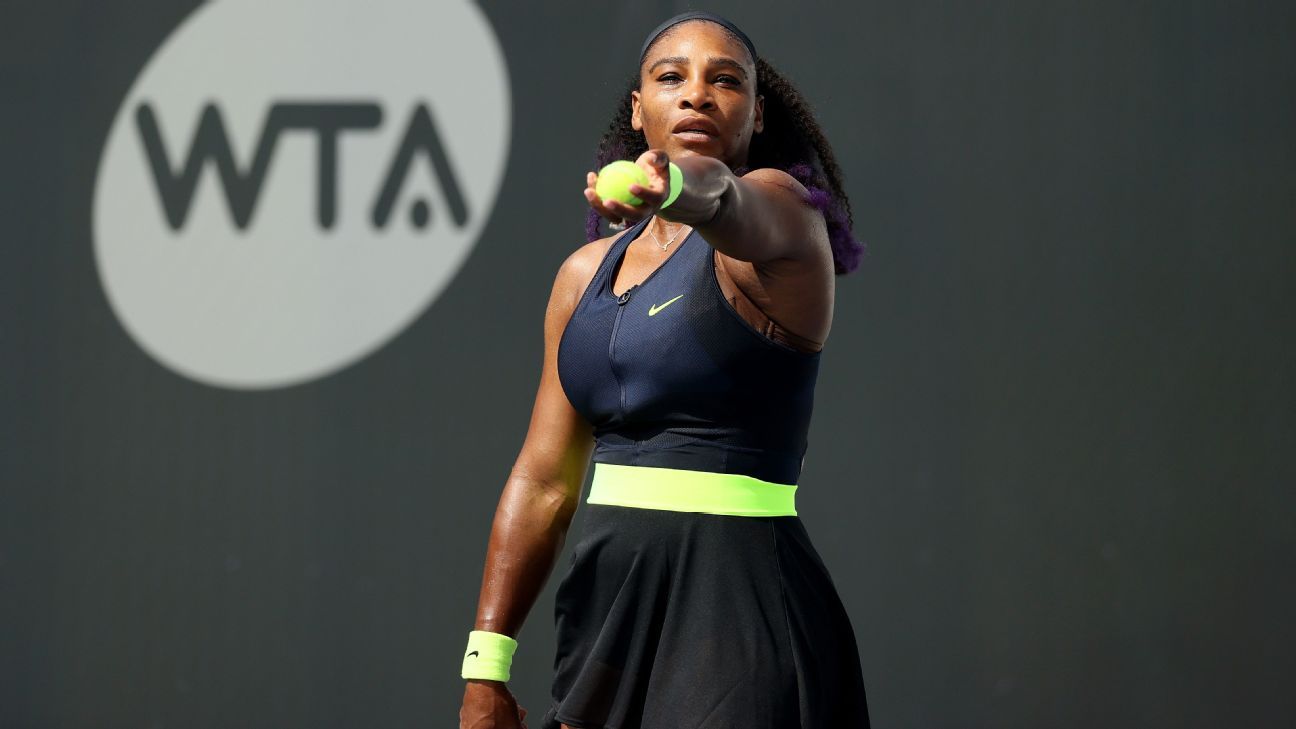 Moments after her dominant first-round win over former world No. 1 Victoria Azarenka at the Top Seed Open on Tuesday, Venus Williams could barely contain her excitement during her on-court interview.

After thanking the healthcare workers and the WTA, reflecting on what it was like to be back on court and saying hi to her parents and sisters, she finally got around to what everyone was already thinking about: her second-round showdown with sister Serena Williams.

“It’s so special,” the seven-time major winner said. “Who would have guessed that this draw would have happened playing two former world No. 1s and Grand Slam champions in the first round in the middle of Kentucky? But this is what it is and these are great tests for me coming into the season and I know that I’m hitting the ball well. … I know Serena came back from the brink and waited until the last minute to play her best tennis and that’s what champions are made of.

When the siblings take the court Thursday, it will mark the 31st clash in their legendary careers. While some meetings have had more on the line than others, and some have ultimately seen lopsided results, the matches always promise intensity, passion and a whole lot of hype, no matter the venue or tournament.

And after nearly five months without professional tennis because of the coronavirus pandemic, there might be no better gift to even the most casual of tennis fans than a Williams sisters match in one of the first tour tournaments after the break.

“It’s been quite the draw for me, but quite honestly, this is perfect, because I haven’t played in forever, so I want to play the best players,” Venus said during her postmatch news conference. “And I think I got my wish playing Serena.”

For the first time in their professional careers, there will be no fans in attendance to cheer them on. No distractions (save for the occasional noise from Serena’s daughter Olympia in the empty stands), and the focus will just be on who is standing across the net. This time it will just be two sisters playing on a small, quiet court, much like how they spent the better parts of their childhoods. They’ve both spoken previously about how difficult it is to face each other because of their closeness — but neither has faced an opponent more.

Serena, a 23-time major winner, owns an 18-12 record over her older sister, including nine of the past 11 and their last meeting in the third round at the 2018 US Open, which finished in a 6-1, 6-2 rout. Currently No. 67 in the world, Venus enters the match with her lowest ranking when facing her sister. Serena has only ever lost on hard court to a player ranked outside the top 50 twice since 2010, but it was the older Williams sister who had the more impressive opener Tuesday.

The 40-year-old Venus, who played with the Washington Kastles during the recently completed World TeamTennis season, cruised to a 6-3, 6-2 win over Azarenka, and arguably played some of her best tennis of late. Serena, 38, struggled in her first match in six months. Facing Bernarda Pera, she needed the first set to seemingly shake off the rust before ultimately emerging victorious, 4-6, 6-4, 6-1.

“I’ve been practicing really well, and I wasn’t getting a good rhythm out here,” Serena said after the match. “And I just kept thinking, ‘Serena, play like you’ve been playing in practice.’ I knew I could play a little bit better if I just hung in there.”

If Serena, ranked No. 9 in the world and the top seed at this week’s event, wants to beat her big sister this time, she can’t afford to have the same difficulties in the first set. The winner of the opening set has taken all but four matches during their decades-spanning rivalry, and it’s hard to think Thursday’s clash will be any different.

While neither sister probably envisioned facing the other in the second round of a low-level event in Lexington, Kentucky, in the weeks before the US Open at the start of the year, and the $25,000 winning purse is undoubtedly one of the smallest either has played for in many years, both have much to prove in a season full of uncertainties and will certainly fight for the win. For Serena, it would be a much-needed boost heading into the two-tournament bubble in New York, where she hopes to finally claim Grand Slam title No. 24, after four straight losses in major finals.

And for Venus, it would signal to her peers and onlookers that she’s far from finished in the sport, despite her struggles over the past few seasons and lackluster results. Not that it seems as if she needs the reminder.

For the past several years, every time the sisters have met on the court, fans and pundits alike speculate if this will be their final match against each other, and we’re reminded to savor it and enjoy every moment. But the seemingly ageless Venus dismissed that notion, unprompted, at the end of her interview on Tuesday, as the faintest hint of a smirk appeared on her face.

“I’m looking forward to the next one after this, too.”