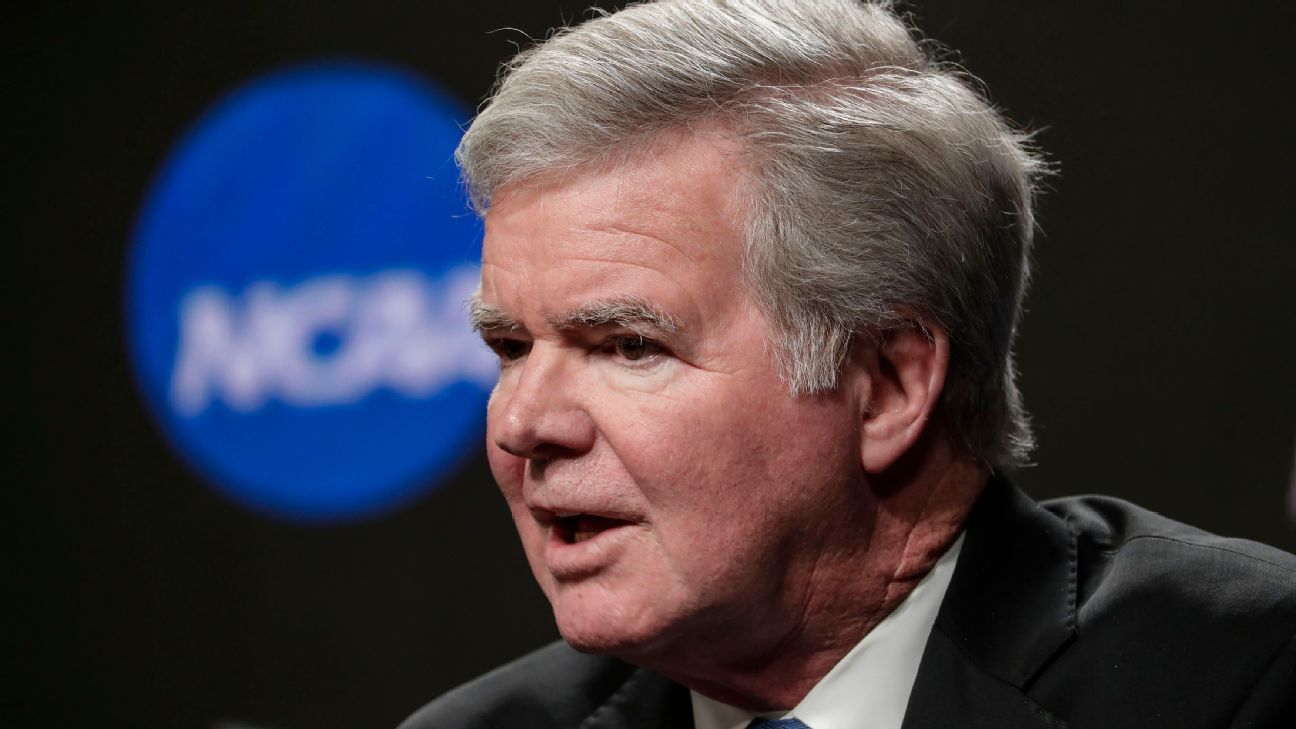 College football has remained a strange, leaderless, regionalized sport even as it has become a multibillion-dollar business. This works out fine most of the time, but it has made planning in the middle of a pandemic almost impossible. How impossible? “Some of the power conferences might start their season in January while the others start in September” impossible. Has the time for strong, centralized leadership finally come? ESPN’s Ivan Maisel, Ryan McGee and Bill Connelly discuss.

After everything we’ve seen in this (potentially even longer than normal) offseason, is college football’s total lack of centralized leadership still tenable? What case can be made for moving forward without it?

Maisel: You can make a great case for centralized leadership, as long as you ignore human nature. The sport is run by the commissioners of the Power 5 conferences. It has been thus since the mid-1980s, when the U.S. Supreme Court ruled against the NCAA and returned television rights back to the schools. They in turn assigned their rights to the conferences. The commissioners wield that power, and very few people in life give up power willingly. We revere George Washington for it, and if you give me an hour, I’m sure I can come up with someone else. Not to mention, it’s a regional sport, and it’s a regional virus, so I’m not sure a one-size-fits-all solution exists.

McGee: OK, first, let’s pause for a moment and appreciate the fact that Ivan went full GW right there. But the point is so accurate. No one is going to willingly give up power, especially after decades of grooming and growing that power. College sports will never not be run by committees, and colleges will never not be run by presidents and chancellors. The structure of college sports is no different than the structure of the United States. It’s regional. So it would only stand to reason that the college sports world’s struggles to come together on how to handle a pandemic has 100% mirrored the nation’s struggle. Varied regions and states and counties and cities with varied rules and varied reopening plans for varied reasons — sounds familiar, right? The best you can hope for is that a congress of whatever form can come together and find a national compromise. Yes, college sports has a national congress of sorts in the NCAA, but … that takes us to the next question.

Connelly: We’ve all said, at one point or another, that college football is a reflection of America, and that has indeed never been truer — or more unfortunate — than in this moment. Watching conferences vie against each other for good PR in their scheduling and their timing of recent announcements has made me very cranky in recent weeks; I was hoping to avoid that for once, but that was evidently too much to ask.

What is the point of an association like the NCAA if it can’t actually take the lead during a crisis like this? What role could it or should it have played to move the sport forward?

Maisel: The NCAA lost what grip it had on college football when the Supreme Court ruled against it. This is really a different way of asking the same question. The NCAA derives its power from its members, who have shown little willingness to give the organization any say-so over college football. In the mid-1990s, an NCAA committee led by UCLA chancellor Charles Young began looking at the feasibility of an NCAA-run playoff. The committee might have met twice before the membership shut it down. Maybe if the membership decides it wants to centralize power, it would turn to Indianapolis. I’m not holding my breath.

McGee: Throughout this entire mess, I have been continually surprised at how few people understand how the NCAA actually works. The NCAA is 100% run by its membership. Go to their website and scroll through the rosters of its endless committees. The NCAA’s only job is to be stewards of whatever those committees hand them, from compliance to the football rule book to transfer rules. The NCAA’s self-written job description reads: “The 500 employees at the NCAA’s Indianapolis headquarters interpret and support member legislation …” That legislation is either written or signed off on by the university presidents, the same people who will immediately turn around and point at the NCAA screaming, “Can you believe they did that to us?!” It is a scapegoat by design, and no one knows that better than current NCAA president Mark Emmert, who is a former university president and chancellor. He takes the public arrows so that the folks making the actual decisions don’t have to. Via the pandemic, I think more people are beginning to realize that the real power — and in this case the real fault — lies with conferences.

Connelly: With the flaws of the system laid pretty bare of late, I could see a push for some sort of change. But, barring Congressional interference (which, to say the least, would bring its own set of issues to the table), this change would simply come from the same people and schools who created the current system. So it would end up being some sort of “commissioner of the commissioners” role. Maybe that’s better? Maybe it’s exactly the same? Probably exactly the same.

If the sport ends up with central leadership, what is the best solution? A commissioner? A governing body such as USA Track & Field? Other?

Maisel: The College Football Playoff is run by a small office of competent, efficient people. If the commissioners can figure out a way to clone Bill Hancock, then we might have an answer.

Connelly: I grew up about 50 miles from Hancock’s hometown, so I’ll just assume you’re nominating me for the role.

Maisel: Now I understand why you are so gung-ho on this issue …

McGee: There will never be a “college football czar” or commissioner, not even a Hancock, be it Bill or Herbie. At best, there will be another committee, whether it be under the banner of the NCAA, CFP or some new cool TBD acronym. The inmates will always be in charge of the asylum, and they like that.

Connelly: I will say, massive shifts in revenue and a downgrade in the overall health of the sport — which is unavoidable at this point, though the degree has yet to be determined — could change what the inmates want. I think the next couple of years represent an opportunity for a change of sorts, but again, the vying and maneuvering of recent weeks makes me less hopeful in that regard.

To revisit my above mention of Congress, however, I do think the NCAA has taken a risk by asking the Senate to get involved with its name, image and likeness fight at the moment. This could work out how it wants — with a Marco Rubio-style, NCAA-friendly resolution — or it could go the other way if the Cory Bookers and Richard Blumenthals get the final say. If they end up passing an Athletes Bill of Rights, like they’ve discussed, that could make things pretty strange for the NCAA-adjacent college football structure as it currently exists, and it might require an extra layer of leadership. That would be an opportunity for positive change, but it also could just end up with a figurehead position that no one respects or listens to.

Do the events of the past few weeks — the drawn-out scheduling drama, the possibility of half the Power 5 playing in the fall and half in the spring — make you more or less confident in the thought of the Power 5 breaking apart from the NCAA and forming their own organization down the line?

Connelly: I mean, they have proved pretty clearly that they have no interest in working together to solve problems, so I have no idea why they’d want to unite in any sort of formal way.

Maisel: I don’t think that is feasible, and if it is, wouldn’t it be expensive? How do they extricate themselves from the NCAA? Do they walk away from the Final Four and all that money that flows from the CBS/Turner deal with the NCAA through to the schools? And if they walk away, wouldn’t they be sued? Wouldn’t there have to be a huge outlay of money and time to stage national championships in two dozen sports? The logistics of starting a new national collegiate entity seem daunting to me.

McGee: Again, why break away from what you’re already running behind the curtain? I’ve always said that the final breaking point would be if there was a window for the Power 5 to grab a much bigger slice of the March Madness money pie than they already have. But the members of the new organization would want to have a similar structure to what they have now, which would mean forming all those committees, building a new HQ, operating the postseason, policing compliance, etc. They have people to handle that now. Besides, if we’ve learned nothing else over the past month it’s that no matter what umbrella organization they belong to, they are totally going to fight over who gets to hold the umbrella.

Connelly: I was a little bit curious if this would result in any sort of movement in the other direction — that is, schools and conferences outside of the “Autonomous Five,” or whatever they call themselves, forming some sort of common good coalition. A Group of 5-FCS mashup of some sort. But with the way the Sun Belt has tied its plans to the SEC’s and other Group of 5 conferences having done something similar, I think it’s safe to say that’s not in the cards, either.