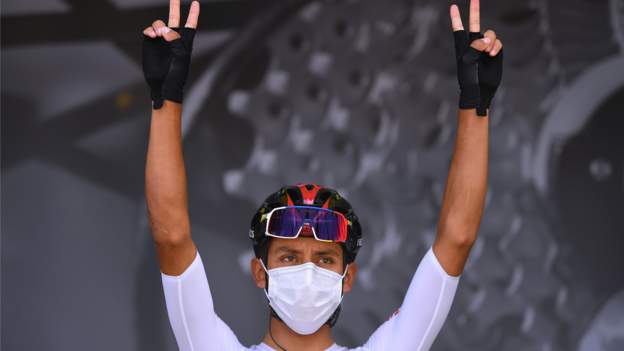 Roglic won the 135km stage, with Bernal 10th and Froome down in 49th place.

The Dauphine is the final warm-up race for many riders before the Tour de France, which begins on 29 August.

Bernal, who is likely to be competing with Froome to be selected for the Tour de France, has been extremely strong during three crucial warm-up races in France before the Tour.

But here he could not hold on to the wheel of Roglic, who was imperious in breaking away with 600m left of the hors category climb to the top of the Col de Porte.

Bernal was only 10 seconds behind, alongside many of the big names set for the Tour including Thibaut Pinot of Groupama FDJ and Bahrain-McLaren’s Mikel Landa.

What happened to Froome?

On what is regarded as the toughest stage of this five-day event, Froome showed more strength than in recent races but pulled back from the lead group, which included many of his Ineos team-mates, with 4.4km to go.

He gave a thumbs up to the camera as he dropped away, but it is hard to see how Froome can be selected for the Tour ahead of Bernal based purely on form.

Ineos’ policy is that whoever is the strongest rider going into the final week of any Grand Tour will be backed by the whole team. Ineos would be unlikely to want to take three team leaders to the Tour.

Geraint Thomas, the 2018 winner who is believed to be a better fit in the team for the Tour alongside either Bernal or Froome, led the Colombian up the mountain until pulling off the lead group with 2.6km to go.

Ireland’s Dan Martin fell in a crash involving about 20 riders just a few kilometres before the final climb of the day.

Martin’s team Israel Start-Up Nation – for whom Froome has signed next year – reported he fell on his back and needed medical attention. But he rejoined and finished the stage.

Friday’s 157km stage, which begins in Corenc and heads on to Saint-Martin-de-Belleville, includes another hors category climb.