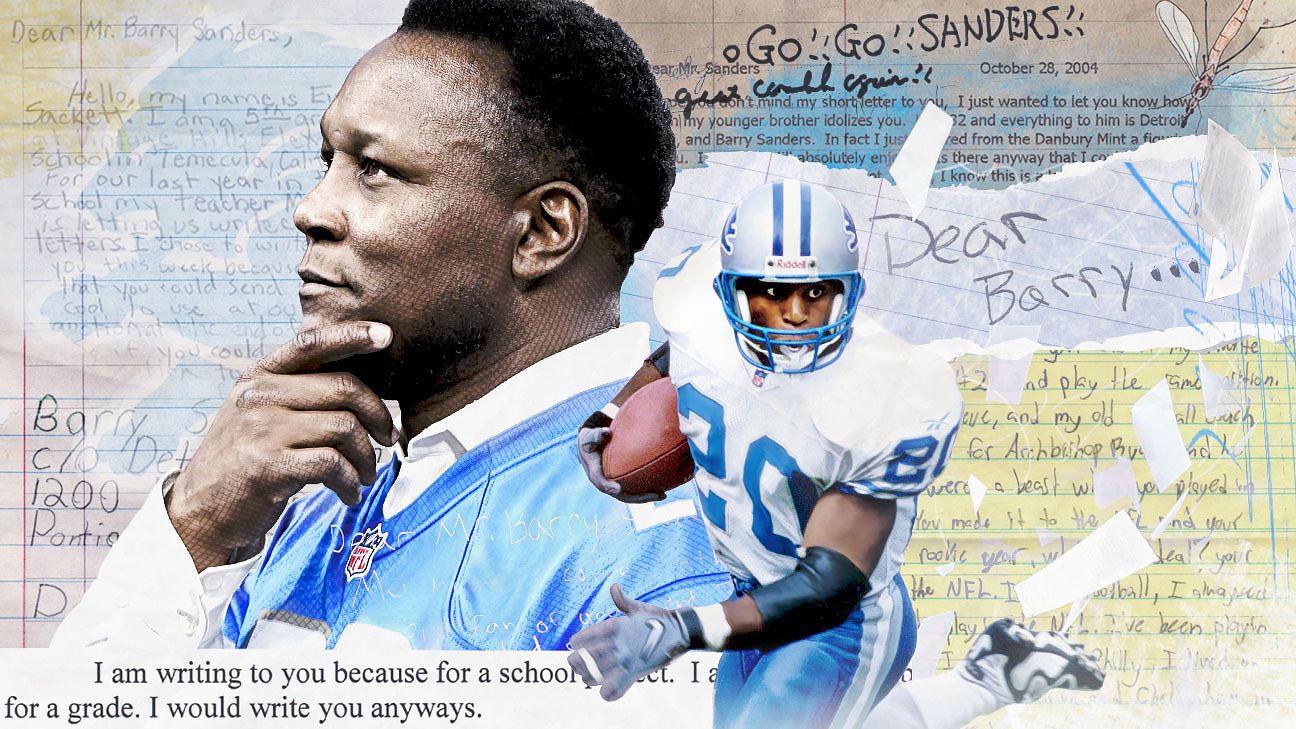 The box sat in storage for who knows how many years. Four? Five? Eight? Inside were requests from children all over the United States, of military serving overseas and families searching for gifts for husbands, children and grandchildren. All of the letters were addressed to the same man. He would have responded if he had known the letters existed.

Barry is running back Barry Sanders, the most famous player in Detroit Lions history. He retired more than 20 years ago, but his name remains synonymous with the franchise. Inside a storage closet in the team’s practice facility in Allen Park, Michigan, about 150 fan letters were discovered in 2018 by Lions employee Brandon Scott.

&• How will Ravens keep six Pro Bowlers?
&• Von Miller motivated by Mamba
&• Williams key to Bengals’ success
&• Continuity will carry Vikes in 2020
&• Bucs add McCoy, but Jones is No. 1 RB

“I was surprised,” Sanders said. “I was thinking, ‘Man, I’m going to have some hate mail in there.’ I mean, because of how I retired. …The first few years of me being retired, there wasn’t much contact between me and the team.

“The fact that some of the mail was lost for that long, yeah, it was a little bit shocking.”

But the mail wasn’t hateful. Rather, it was, almost to a letter, unadulterated love for Sanders from children who, in some cases, were barely old enough to remember him playing. They were all written after he retired, often addressed to the Pontiac Silverdome, which helps explain some of the confusion in the first place.

How they ended up in Allen Park in a storage closet remains a mystery. And they might still be there if the Lions had not undergone renovations of their facility and Scott wasn’t looking for a photo of another player.

The kids who wrote Sanders are now adults. Some of the senior citizens who wrote him are deceased. Sanders said all of them will get some sort of response.

“It’s meaningful,” Sanders said. “It just shows what kind of career I was able to have and that I was able to connect with a lot of fans in that way, you know. I’m proud of that. I remember being a fan. I never wrote anyone, but I followed players religiously, so I kind of understand a little bit of that feeling behind the letters. It’s a big honor.”

The following is a sample of the long-lost letters and their authors.

At first, Ahmed Saleh didn’t remember writing Sanders a letter. He was a kid and, honestly, thought it was someone else who wrote it.

Then the address matched up. And when he heard the letter being read back to him, he instantly recognized it. Even if he chuckles at thinking he could convince Sanders to come out of retirement.

“In my child’s mind, yes,” Saleh said. “In my adult mind today, absolutely not.”

Saleh should know. His family, from Dearborn, Michigan, is a football family. His father and uncles played college football. If the last name is familiar — it should be. His cousin is Robert Saleh, the defensive coordinator for the San Francisco 49ers.

Ahmed Saleh got into coaching as well. After a stint as a graduate assistant at Colorado State, he recently got a job as the safeties coach at Madonna College. And he’s still writing letters — albeit different ones — today.

“As a coach I write letters to other coaches,” Saleh said. “Heard back from Hue Jackson, former Browns head coach, not too long ago … So Barry Sanders actually saw that letter I wrote him all those years ago? Wow, that’s awesome. It’d be great to hear back from him.”

Even though he grew up in Chicago, it was Sanders who got Lezama into football. He watched Sanders as a kid and tried to emulate his moves. So when he got an assignment to write to his favorite celebrity as a seventh-grader at St. Genevieve’s, he chose Sanders. If he got a response, he would receive extra money for an end-of-year auction at the school.

Lezama became more of a Sanders fan a year later, when he received a DVD of Sanders’ highlights. He currently works as a youth basketball coach in Chicago. Lezama even worked part time in the Bears’ marketing department in 2017-19.

“I was hoping for the best, keeping my fingers crossed as time went on,” Lezama said. “I never realized that something like this, some assignment back in seventh grade would come around and become a story in my life.”

As a 14-year-old Scranton Middle School student in Brighton, Michigan, Fornasiero wrote letters to athletes frequently. Some for school assignments, some for fun, some for autographs. John Elway once responded. However, he never did hear back from Sanders. Now he knows why.

“I didn’t expect to get anything back,” Fornasiero said. “I sent it because he was my favorite football player…I just wanted an autograph. He’s one of the greatest running backs ever, in my opinion. “

In time, Fornasiero found another love: combat sports. He started boxing at age 12 and jiu-jitsu at 14. He has four amateur MMA fights under his belt. He is currently a jiu-jitsu coach, working with Bellator and UFC fighters.

Growing up, Barnett always heard from his grandfather: “You run like Barry Sanders.” Barnett’s grandfather was a Lions fan and even though Barnett was in Columbus, Ohio, he became one, too. When he received a middle school assignment to write a letter to his role model, only one person fit: Sanders.

“Who is better than Barry Sanders? So I decided to write the letter,” Barnett said. “Because I admired his elusiveness in the field — that’s why I wanted to be just like him when I was younger.”

At age 14, Barnett said he starred at running back for his team, the Rattlers, and had all the confidence and cockiness in the world. Barnett even offered Sanders his own autograph when he turned pro.

That never happened, but he said one of his teammates was New York Jets safety Bradley McDougald. After high school, Barnett pursued another longtime dream — the military, where he is now a Private Second Class, serving at Fort Huachuca in Arizona.

“I remember that kid. I have a son and he already is the exact same way I was,” Barnett said. “I was a little confident young man trying to play football.”

Barnett’s son, Julian, is 10. At 5-foot-4, 135 pounds, Julian plays defensive end. He loves football like his dad, who has said showing him Sanders highlights has been “a must.”

The prospect of hearing back from Sanders turned the 28-year-old soldier into a wide-eyed middle schooler again.

“That would mean the world to me,” Barnett said. “I would call up my wife, tell my son, ‘You can really talk to your role models and the people you really admire in the world. They will respond back to you.’ “

Even if it takes more than a decade.

In upstate New York, whenever sixth-grader Josh Formeck touched the ball in 2004, he pretended to be his favorite football player: Barry Sanders. So when it came time for an assignment in school, while the rest of his classmates were writing to actors or singers, he wanted to learn more about Sanders.

He didn’t ask for an autograph or send a card to have signed. He just had questions. Lots of them. Sixteen years later, when he heard his letter read back to him, he was impressed with what he actually asked Sanders, including who hit the hardest and why he retired.

“I guess I just probably wanted to see the real him, see if he would answer,” said Formeck, 27, who works in shipping at a steel mill just outside of Fort Wayne, Indiana. “I think a lot of people would want to know who the hardest-hitting dude you’d ever been hit by and what did it feel like. Because those dudes are huge.”

As a fourth-grader in Wisconsin, FitzPatrick and his dad were the rare Lions fans. Part of a class project included writing to their favorite football players.

FitzPatrick chose Bart Starr and Sanders. He still remembers the warning from his teacher.

“‘Don’t send your favorite football card,'” FitzPatrick said. “‘Send one, if you have a lot of one guy, maybe send those cards.’ He made it clear we weren’t going to get these cards back.”

FitzPatrick had a nice, foil Sanders card he decided not to send. Still a Lions fan, he stopped playing football in high school when he found a passion for cross-country skiing. That — and academics — took him to Harvard; the 22-year-old graduated in May.

When Trowell was a kid growing up in Texas, he was a big Dallas Cowboys fan — unless he was playing Tecmo Bowl. Then, it was all about Barry Sanders. And it was in that vein he decided to write to Sanders years later when he was serving the second of three tours of duty in the Middle East — this time in Iraq.

He had done more fighting in his first tour — traveling from Kuwait to Baghdad and then Fallujah. The second tour, in 2005, he didn’t have as much fighting and had more time to pass the time writing letters.

“It was still a really dangerous year, but I think a lot of that year we had a lot more time on our hands,” Trowell said.

Now a firefighter in Georgia, he laughed when he heard about his lost letter because it was a minor miracle his letter reached the United States to begin with, only for it to get lost when it actually reached Michigan.

“For it to even get there is pretty impressive, because it has to go through so many outlets. During that time, it was a little more sophisticated as far as the logistics involved with everybody out there,” Trowell said. “But it was still very basic, so letters to be sent out were commonly lost, just because of the mail system over there and how many places it had to go.

“For it to even make it to its destination, even if it took 15 years, that’s still pretty darn impressive.”