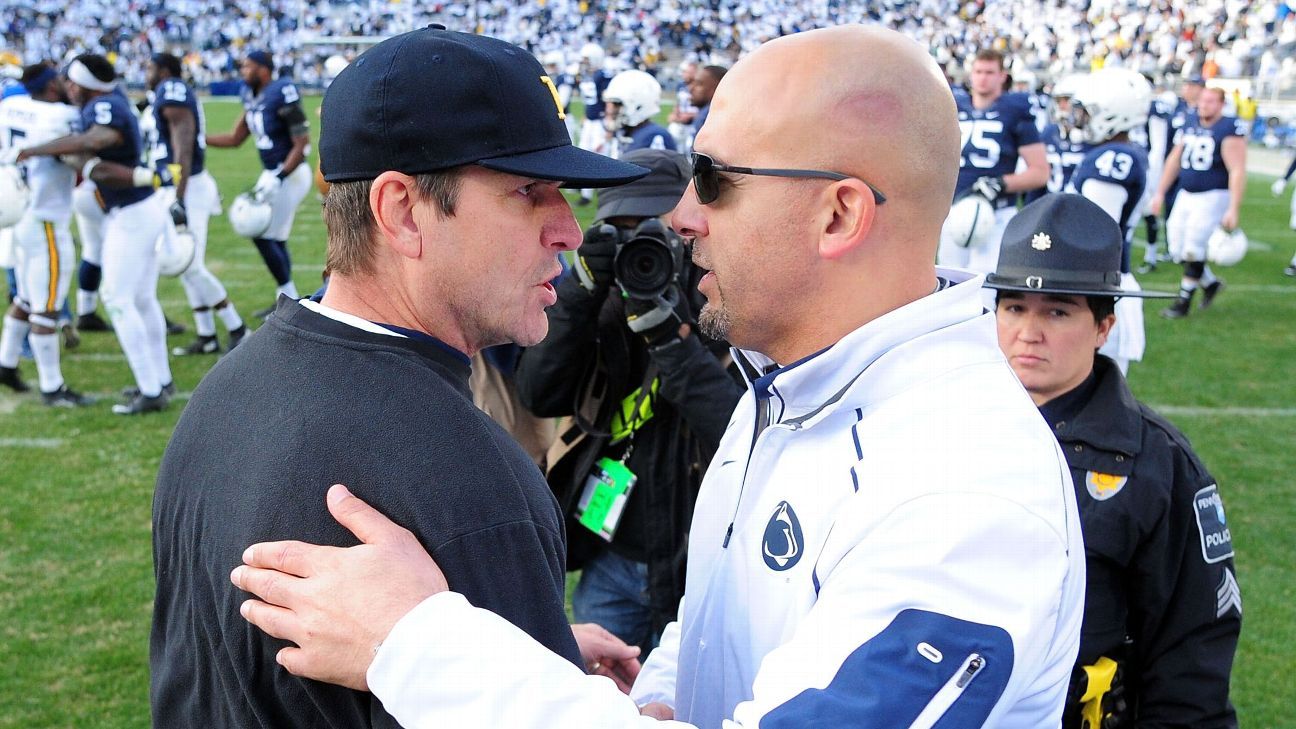 A day unlike any other in college football history started at 12:01 a.m. ET Monday when the game’s biggest star, Clemson QB Trevor Lawrence, was among the dozens of players to tweet a statement that expressed their desire to play the 2020 season and shared items they feel need to be addressed to ensure a safe and fair environment for student-athletes moving forward. Lawrence was joined by dozens of players, including Ohio State QB Justin Fields, Oregon OT Penei Sewell and Oklahoma State RB Chuba Hubbard.

It set the stage for a day that included a presidential tweet, Big Ten coaches like Ryan Day and Jim Harbaugh fighting to save their seasons, and Scott Frost even floating the idea of playing outside the Big Ten for a year if the conference shut down its fall season. When the day began, it felt like a foregone conclusion that at least the Big Ten and Pac-12 would soon be postponing football until the spring. As the day ended, there was a sense the conferences might just delay their season a few weeks before making a final decision.

Here’s a conference-by-conference look at where things stand heading into a Tuesday that promises to be just as chaotic:

Monday in the Big Ten began with premature reports that the league’s presidents already had decided to postpone fall sports, including football. Around midday, a league spokesman confirmed to ESPN and others that no vote had been taken on the fall season. Still, all signs pointed to the Big Ten pulling the plug by Tuesday, especially if the Pac-12 was on board, too.

Then, the league’s most prominent coaches began speaking out. Loudly. And seemingly against many of the league’s presidents. Michigan’s Jim Harbaugh went first, outlining why the plan to play football is working and can continue on a positive track. Ohio State’s Ryan Day and Penn State’s James Franklin posted Twitter messages supporting their players and the #WeWantToPlay push. The boldest words came from Nebraska’s Scott Frost, who said the school was completely aligned to play a season and would even attempt to compete outside the Big Ten, if necessary.

How will the coaches’ messages impact Big Ten presidents, who meet again Tuesday morning and likely will vote on the fall season? The presidents could stick with their initial plan to postpone all fall sports until 2021, an option that clearly wouldn’t sit well with coaches, players and fans. Or they could push back the start of the football season a few weeks and see how practices and the repopulating of campuses impact the landscape. Several league sources and longtime Big Ten observers think first-year commissioner Kevin Warren and the presidents must “read the room” and resist the impulse to postpone outright. But sources also say Warren is extremely concerned about the long-term effects of COVID-19, especially heart damage.

Monday’s messaging was dreadful for the Big Ten, which prides itself on unity and avoiding public squabbling. This is a league where Ohio State and Michigan agree to share revenue equally with Indiana, Northwestern and Purdue. Warren faces a critical moment in his young tenure, as he must build consensus with all the league’s key groups, not only the presidents. The Big Ten still might end up punting the fall season, but not right away. — Adam Rittenberg

The Pac-12 CEO group, which is made up of a president or chancellor from each of the 12 universities, will have a meeting Tuesday during which it is expected to vote on how to proceed with football and the rest of the fall sports. This group serves as the conference’s ultimate decision-maker and will rely on input from the conference’s medical advisory group, among other sources, to form its path forward.

On Monday, the Pac-12’s Student-Athlete Health and Well-Being Board submitted a document to commissioner Larry Scott that outlines recommendations for how to proceed. Board member Dr. David Petron, a team physician at Utah, said in a radio interview on ESPN 700 in Salt Lake City the recommendations will be to “stop contact and competitive activities at this time.” However, he allowed for the possibility the conference could proceed with a fall sports schedule if it is able to meet certain medical needs, including a more frequent testing program and cardiac evaluations.

Pac-12 head football coaches and athletic directors were briefed about the state of the conference ahead of the CEOs meeting Monday night. While the growing sentiment around the league Monday was the league will eventually decide to postpone the fall season with an eye toward playing in the spring, it’s possible the group could vote on a more short-term plan Tuesday to buy some additional time before making a final decision about the fall season. — Kyle Bonagura

The SEC is digging its heels in, at least for now, and that’s despite what the Big Ten, Pac-12 or anybody else decides about the 2020 college football season.

For months, SEC commissioner Greg Sankey has said the league will use all of the time it can to make any decisions about the fall and gather as much information as possible from medical officials. Sankey was sounding a similar theme Monday amid all the reports of different conferences shutting it down this fall.

Sankey tweeted: “Best advice I’ve received since COVID-19: ‘Be patient. Take time when making decisions. This is all new & you’ll gain better information each day.’ @SEC has been deliberate at each step since March. … delayed first game to respect start of fall semester.”

Alabama coach Nick Saban told ESPN on Monday that the return of other students to campus would pose a challenge.

“I get that, but we really don’t know what that entails until it happens,” Saban said. “It’s a big reason we pushed the season back [in the SEC], to assess that, which is the prudent way to do it.”

The SEC pushed back the start of its season until Sept. 26. Several SEC athletic directors told ESPN that the league is committed to staying the course and hopeful that at least one other Power 5 conference will do the same. Ultimately, the greatest challenge to playing this fall will be presidents and chancellors standing firm in the face of liability.

Tennessee chancellor Donde Plowman met with the Vols team on Monday and tweeted that she received a “resounding YES” when she asked the players if they wanted to play this season.

“This group of student-athletes have worked hard to prepare for the season amidst details and strict healthy and safety protocols. I can’t wait to see them on the field in Neyland Stadium,” Plowman tweeted. — Chris Low

To be sure, everyone is watching what happens with the Big Ten, but the talk out of the ACC suggests any movement toward cancellation will come independently of other leagues.

ACC athletic directors met Monday morning and did not alter their current plan for the fall season. Practices continued across the league, including at Syracuse, which had skipped two days of workouts last week amid player safety concerns, and at Clemson, where Lawrence and Darien Rencher helped spearhead a push from players throughout the country calling for the season to be played.

“I’m glad our conference is fighting for us,” Lawrence said. “If we see progress, let’s continue to play. If it gets bad, we’ll course correct, but right now it’s been good and they owe it to the players to fight for us.”

It won’t be the ADs who have the final say, however. The league’s presidents and chancellors are expected to meet Wednesday to discuss options, and they could be influenced by what happens with the Big Ten and Pac-12. One ACC coach said things are changing hour by hour.

Still, coaches are progressing as if the league will stick to its current plan, which would have the season open on Sept. 10. Louisville’s Scott Satterfield said in a Monday Zoom conference that the ACC would make its own decisions and lambasted other leagues for “doing this yo-yo.”

“We’re planning to follow that plan until we’re told otherwise,” another coach said. “The next hurdle is when all the other students return.” — David M. Hale

No decisions have been made by the Big 12 to this point, but league officials will meet on Tuesday, starting with the athletic directors, followed by the conference’s board of directors.

The league could provide the turning point in deciding how much college football happens this fall, and at this point, it’s difficult to decipher which way the Big 12 will go. If the Big Ten and Pac-12 shut it down, will the Big 12 follow them, or will it hold out with the SEC and perhaps the ACC in trying to forge ahead?

The league appears to be on the fence at the moment, but given how the scheduling announcements played out in recent weeks, don’t expect the Big 12 to rush to a decision; it could be the last among the Power 5 to make a move. — Sam Khan Jr.