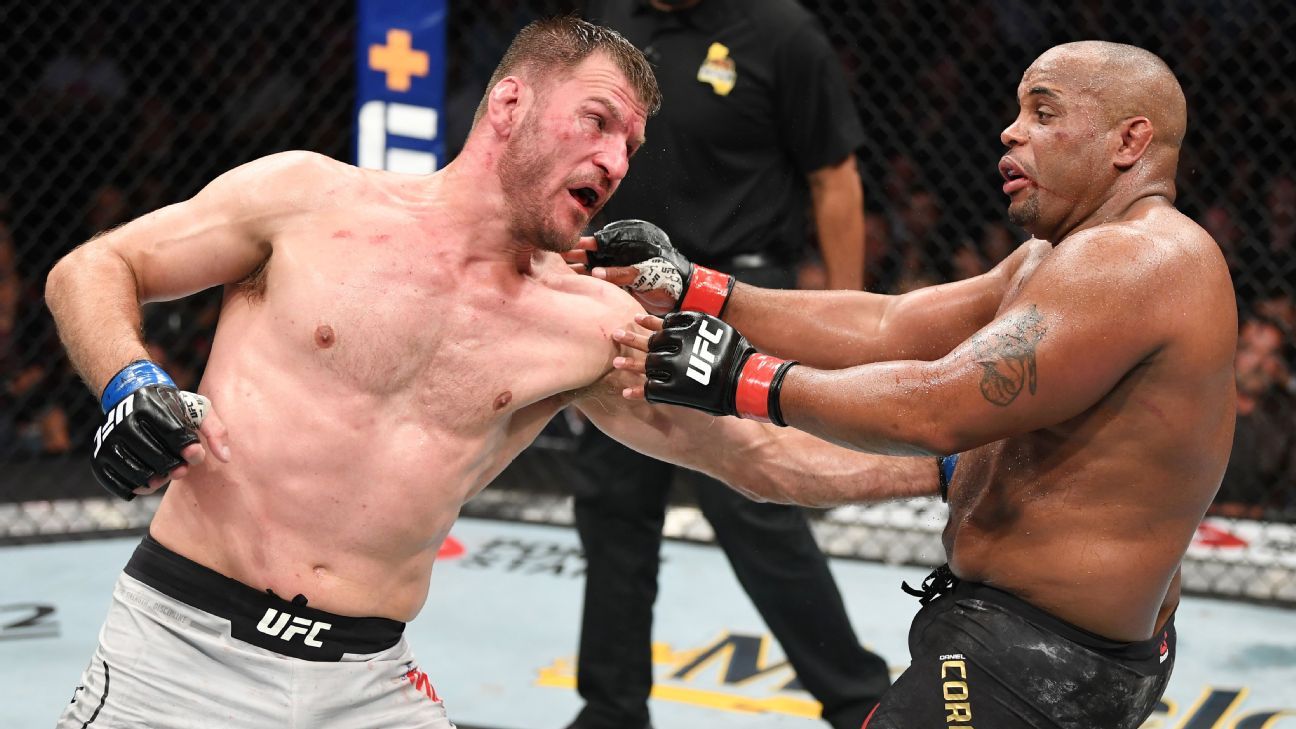 Marcus Marinelli was leaning against the Octagon at Honda Center in Anaheim, California, on Aug. 17, 2019. His fighter, Stipe Miocic, was inside the cage, challenging Daniel Cormier for the UFC heavyweight title.

In the fourth round, with Cormier ahead on all the scorecards, Miocic landed a big body shot, followed by a jab and right hand to Cormier’s jaw. Seconds later, the fight was over. Miocic won by TKO to reclaim the title he had lost to Cormier the previous summer.

When referee Herb Dean stepped in to call the fight, Marinelli lost it. He screamed in celebration and started slamming his hands against the base of the Octagon as hard as he could. Then he realized something was amiss inside his latex gloves.

The UFC 252 main event will feature one of the most highly anticipated trilogies in MMA history. Stipe Miocic, who holds the UFC record for consecutive heavyweight title defenses, will face former two-division champ Daniel Cormier on Saturday. Cormier won their first meeting and the heavyweight belt in 2018, and Miocic evened the score and regained the title the following year. In the co-main event, rising star Sean O’Malley will look to move to 13-0 when he meets Marlon Vera.

It was the replacement wedding ring he wears when coaching.

“I was so freakin’ pumped,” Marinelli said. “I was smashing the thing with my hands, like ‘F— yeah!’ I cracked my titanium ring in like four pieces. It was in my glove. I was thinking like, how did that piece of metal get in here?”

On Saturday, two days short of the one-year anniversary of that victory, Miocic will meet Cormier again for the heavyweight title at UFC 252 in a bout many have suggested could decide who is the greatest heavyweight in MMA history.

And the body shots that helped decide the second leg of this trilogy serve as a key backdrop for Saturday’s main event. Cormier even seemed to taunt Miocic during an April interview with ESPN’s Ariel Helwani when he said Miocic should go to the body earlier next time.

ESPN interviewed the principals involved in the 2019 fight to get their firsthand perspective on the tactics that led to Miocic winning back the title.

Editor’s note: Answers were edited for length and clarity.

Marinelli: After the third round, we’re in the corner and I told the other coaches, ‘Listen guys, I’ve gotta wake Stipe up. I’ve gotta get his mind going.’ Because he knows what to do, and he knows he can survive out there very well. Our job is to see what he can’t see and to keep him safe. I kind of got up his ass a little bit and was like, ‘Listen, you’re better than this motherf—er. You have it in you. You have to get back to what we’re supposed to do.’ It really wasn’t even technical at that point. I knew if we could get his mind to realize what we should be doing, then I know it would be good.

Javier Mendez, longtime coach of Cormier at American Kickboxing Academy: I remember myself and the other coaches ‘Crazy’ Bob Cook, Rosendo Sanchez and Leandro Vieira going nuts, because DC went away from the plan in the second round. He just slugged it out with him and wanted to knock him out. We were just pleading with him to go back to wrestling and doing the things that were working. He didn’t listen. He’s very competitive. You can’t tell DC, ‘You can’t beat me this way.’ He’ll be like, ‘Oh no? OK.’ He’ll try to do what we say he can’t. But honestly, the vast majority of the time he does what we say he can’t and he’s successful at it.

At 1:55 of the fourth round, Miocic lands a body shot, a left hook near Cormier’s liver. It’s Miocic’s first body shot landed since the second round. Five seconds later, Miocic lands another one.

Dominick Cruz, UFC analyst, during the broadcast: Now he’s thinking, fourth round, start attacking the body. He noticed DC can’t move and dodge those, and he can’t counter. He’s just gotta eat them.

Miocic: I got him once with a body shot in the second. I hit him in the fourth round and I’m like, ‘Oh, let me try that again.’ I didn’t want to do it too many times, because after a while the well runs dry. I hit him again, he winced. I’m like, ‘Oh! OK, I found it.’

Marinelli: You could tell he came out different for that fourth round. Hopefully some of what I said worked. The proof was in the pudding. He went out there and started getting little better vision on what was in front of him. Instead of just throwing punches, he had a little better vision and some of the tactical approach started coming, too.

Cook: You just knew the body shots were not good. Honestly, Daniel fought the first round the way that he trained. And he just kind of lost his cool and was just trying to knock him out. That kind of became his focus, and he kind of stopped fighting smart. It was definitely frustrating. It was DC fighting more emotionally than smart. It was Stipe making some adjustments and digging the body and landing some really beautiful shots, and DC not making the adjustments, just still continuing on that path of, ‘I’m just gonna try to knock him out with the next punch.’ That wasn’t working out.

At 2:22 of the fourth, Miocic lands a grazing left uppercut to Cormier’s body. Five seconds later, Miocic lands another hook to the liver area, followed by another.

Cruz: That one hurt DC. Now [Miocic has] made the adjustment. Intelligent from Stipe there.

Marinelli: We were telling Stipe to continue to look for the body shot. And we were looking really hard for that right hand [to the head] after, because I could see Stipe hit him to the body and you could see Cormier’s body position change. Cormier dips his head real nice off of right hands and stuff, but it wasn’t moving then. So we were trying to get Stipe to go to the head.

Mendez: I just saw the power leave DC. Along with the rounds he fought, those shots added to DC being tired. When you get hit with those kinds of clean shots, I don’t care how great of shape you’re in. That many shots is gonna take a lot out of you. If you’re tired already, it’s even worse. I just kept pleading to him to go back to wrestling. Wrestle and mix everything up. You’re coming in and just boxing the guy. You’re not kicking anymore. ‘I need you to go back to MMA — it’s MMA.’ Let’s do everything. I can’t remember word for word what I said, but I can tell you I wanted what he did in the first round.

Marinelli: You have to have a vision of your playing field. I think Stipe finally got a vision of that playing field. Sometimes when you get caught in that chaos, you react with chaos. That’s kind of what was happening for the first three rounds.

Stipe Miocic says that dancing after he knocked out Daniel Cormier was “stupid” and that he “shouldn’t have done that.”

At 3:46 of the fourth, Miocic lands a left shovel hook, almost like an uppercut, to Cormier’s body and then follows with a right hand. Miocic hits Cormier with a body shot, angles out, then smashes a 1-2 combination — a jab followed by a right cross — at 3:59. The combination wobbles Cormier, and that was the beginning of the end.

Miocic: I saw he winced, that’s why I angled off. It took me 3 ½ rounds to angle to my left. I hit him with a 1-2 and caught him across the chin. It worked out great.

Cormier: The body shots were great. But I always say, you cannot take punches consecutively. That’s when it becomes a problem. I wasn’t in shape. If I wasn’t so tired, I might have fought back through that. I might have shot a single-leg [takedown attempt] or something to try and keep myself in the fight. But all that comfort in training camp didn’t allow for me to do that.

Miocic pounces when he sees Cormier hurt. He lands two more right hands and then a flurry of lefts. Dean steps in and waves the bout off at 4:09 of the fourth. After 14 body shots and some big finishing combinations, Miocic regains the heavyweight title.

Marinelli: We’ve worked body shots since the day Stipe walked into the gym. He’s really good at body shots. We work them all the time. But Stipe made that call. He saw it in front of him. We want him to go to the body ­– we called it earlier. But he’s the one who saw it and made the call. His fight IQ is extremely high.

Cormier: I think I fought the dumbest fight I’ve ever fought. My hands were low. I was still a bit injured after back surgery [in December 2018]. There was a lot of comfort in my training camp. And because of that comfort, I wasn’t in shape. I had to have some real serious questions about myself recently with Bob Cook.

I got hurt to the body, then I got hurt to the head. And one of the reasons I fell was because I was fatigued. I’ve been hurt worse in a lot of situations and fought my way back. Alexander Gustafsson hurt me worse than I was hurt there. Anthony “Rumble” Johnson hurt me bad. Even when Jon Jones kicked me in the head, I was hurt worse and I was trying to underhook him and fight back. I was in better cardio shape.

Miocic raises his hands and makes a motion like putting on a belt. He does an Irish jig in the middle of the Octagon, which he later said he regretted.

Joe Rogan, UFC analyst, during the broadcast: Wow! Those nasty left hands to the body started draining the tank and then Stipe poured it on and regained his title.

Cruz: That is not an easy thing to do. DC fought an incredible fight. The entire time he was ahead — until Stipe made the adjustments.

Marinelli: There’s a lot of emotion there. I could feel Stipe’s jubilance. It was like, ‘oh my gosh’ — unbelievable.