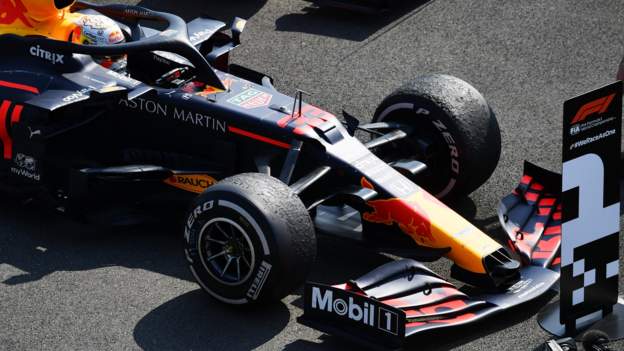 It was a surprise, even to him, in a year of absolute dominance by Mercedes so far. But if anyone was going to do it, it was always going to be Verstappen.

A glance at the championship standings says everything about the quality of Verstappen’s driving this year. After five races, he is in second place behind Lewis Hamilton, an astonishing achievement given the deficit Red Bull have to Mercedes.

People might point to the fact that Hamilton’s team-mate Valtteri Bottas failed to score points after a puncture at the British Grand Prix when the Finn was running second.

But don’t forget that Verstappen has already had his own dose of bad luck, when his Red Bull ground to a halt when running second to Bottas at the season-opening Austrian Grand Prix.

So both Verstappen and Bottas have had a non-scoring race this year, and it’s Verstappen who is ahead. In fact, were it not for that retirement in Austria, Hamilton’s commanding 30-point lead would likely be halved.

Staggeringly, since Bottas joined Mercedes at the start of 2017, he has recorded the same number of wins as Verstappen – eight. Despite the Dutchman generally having the third best car in the field.

But this article is not about Bottas underperforming, it’s about Verstappen and his consistent excellence.

Brilliant since midway through 2018

Verstappen has seemed destined for great things for a while.

When he was first switched to Red Bull from Toro Rosso in 2016, still only 18, and won on his debut for the team in Barcelona, there was a lot of hype, which has existed around him ever since he switched to car racing from karting in 2014.

But the start of 2018 was difficult for the him.

He displayed his usual pace, but had a growing reputation for crashing and hot-headedness and had incidents in each of the first six races that year, culminating in him crashing in Monaco practice as team-mate Daniel Ricciardo won the grand prix.

Asked about his run of mistakes at the next grand prix in Canada, Verstappen said he might headbutt the next person who asked him about it.

But it was at that race that Verstappen turned the corner – and since that moment he has been frighteningly good.

From then on, Ricciardo out-qualified Verstappen only twice more at Red Bull in 10 legitimate attempts and promptly fled to Renault at the end of the season.

At the time it seemed like Ricciardo was running away from a fight with Verstappen at Red Bull – and that’s exactly how their team boss Christian Horner viewed it. But with the evidence we have in front of us now, you can see why Ricciardo left.

Ricciardo was on average just less than 0.2secs slower than Verstappen in qualifying at Red Bull in 2018. Since moving to Renault, he has impressively beaten Nico Hulkenberg in 2019 and is currently showing very well against highly rated Frenchman Esteban Ocon.

When Ricciardo left Red Bull, it seemed like he had a one-lap pace weakness, but now he is back showing good qualifying form against his team-mates. The big difference is, of course, the team-mate he is comparing against is no longer Verstappen.

Meanwhile at Red Bull, Verstappen dismantled Ricciardo’s replacement last year, Pierre Gasly, to the point that Red Bull demoted him back to the junior team, Toro Rosso, halfway through the year.

Gasly was on average over 0.5secs a lap slower than Verstappen, and was lapped by his team-mate twice in the 12 races they had together at Red Bull.

So in came Alex Albon, a highly promising young British-Thai driver, but the result at Red Bull has barely changed.

Verstappen still enjoys a 0.4secs qualifying advantage against Albon on average, and is constantly a thorn in the side of Mercedes, while Albon is usually left fighting with the midfielders to get into the top four or five.

In Formula 1, the best yardstick for measuring a driver’s performance is a comparison against their team-mate – the only man in the field with theoretically the same equipment as them.

In this comparison, Verstappen comes out with flying colours. He’s giving Red Bull a real headache in terms of finding a second driver, because it just seems that there are very few out there who can hold a candle to the Dutchman at the moment.

Just getting better and better

Verstappen has also honed his race-craft over the years, remaining one of the most aggressive and interesting to watch in wheel-to-wheel combat, but now he’s avoiding tangles that he would possibly have had in years gone by.

Right now, there’s no doubting that Hamilton is the man to beat in F1. He’s so dominant, being probably the strongest driver in the strongest car.

But watching Verstappen trying to beat the Mercedes is like watching a classic underdog performance every weekend.

Verstappen is the underdog the neutrals like to see win, to spice up the action. F1 needs him right now.

In many ways, this was a role Hamilton played for a period before his dominant years with Mercedes.

After he won his first world title with McLaren in 2008, Red Bull were generally the team to beat, and Hamilton was also arguably the underdog we liked to see win, with some thrilling drives against the dominant Red Bulls of 2010-2013.

Performances like his victories in China in 2011, or Austin in 2012, had fans going wild, extracting the most out of his McLaren, against title-fighting Sebastian Vettel in a faster Red Bull.

At the end of 2013, Hamilton warned that Vettel’s dominance could bore fans, as the German was on the brink of a fourth title in a row.

Fast forward seven years and the shoe is most definitely on the other foot. Hamilton, unquestionably still at the top of his game, is now in the fastest car and is constantly the man to beat. While Vettel is falling by the wayside, it’s Verstappen who is more and more emerging as Hamilton’s nemesis of the future.

It’s Verstappen who is putting in Hamilton’s old style of drives that fans love to see – out of nowhere, gritty and determined, taking on the establishment and winning.

Last weekend at Silverstone was exactly that, putting an end to Mercedes’ winning run in a year where it seemed they could be invincible.

But we should enjoy these Verstappen’s drives while we can. He might at the moment be a small part in the Lewis Hamilton show, but if he can get himself into the best car, the Max Verstappen show will be just around the corner.