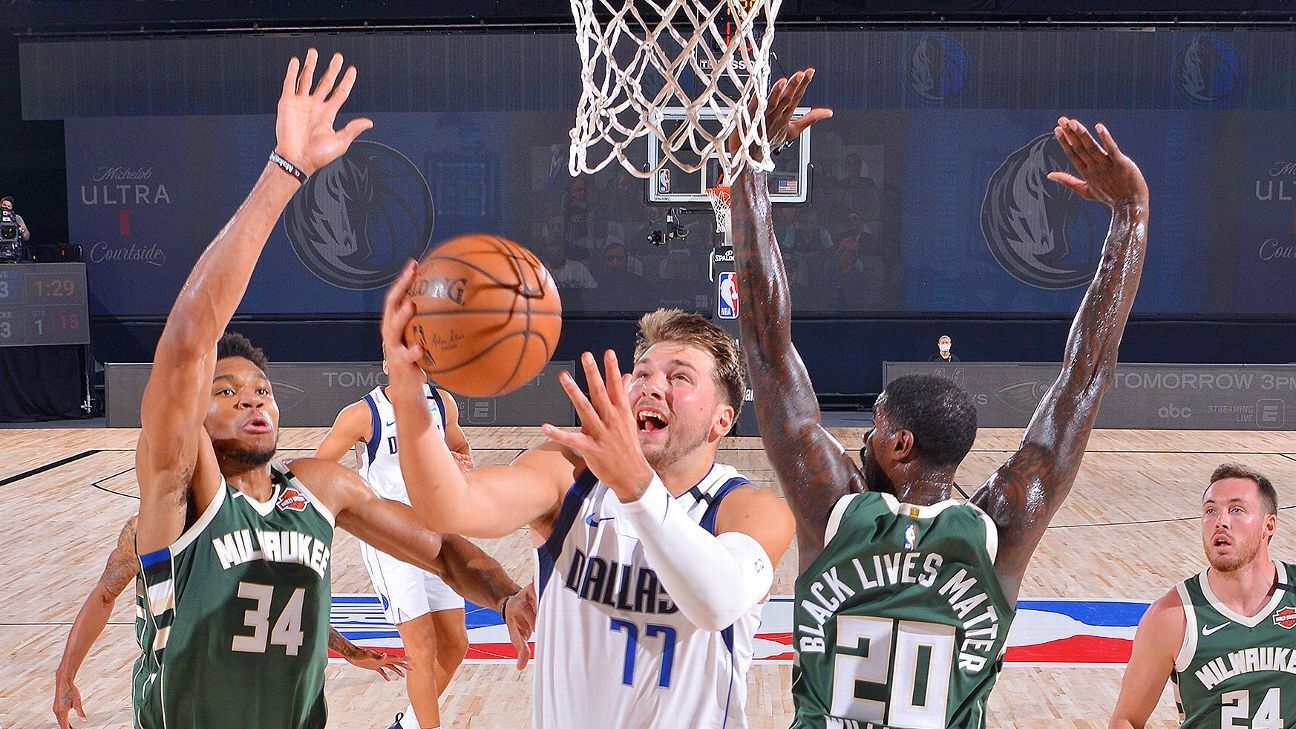 During the final moments of the first five-minute quarter of the Milwaukee Bucks’ first five-on-five scrimmage since the NBA’s shutdown in March, Giannis Antetokounmpo’s team found itself down a bucket. When a long miss by the opposing team caromed off the rim and floated toward the baseline, Antetokounmpo launched himself with both feet, and splayed himself horizontally across the baseline plane to lunge for the loose ball.

Upon watching their leader risk bodily harm in pursuit of an inconsequential possession, teammates gasped collectively. The practice court in the bubble is mounted a few inches above the floor, an awkward margin that should give anyone, let alone a superstar, pause. The team had all but sewn up the East’s No. 1 seed, with little riding on the final regular season games other than re-finding their rhythm and arriving into the postseason healthy.

But there was Antetokounmpo, behaving as if a title was on the line, injuries be damned. He snared the ball before it fell to the hardwood, and tipped it back to Kyle Korver.

“What he does is insane,” says Bucks head coach Mike Budenholzer. “It’s a level of competitiveness that sets a tone for everyone — not just players, but the staff and the entire organization.”

Giannis’ team ultimately won the scrimmage, though it was a result that wasn’t recorded and largely forgotten by all present. What they did remember was Antetokounmpo’s dive. Over the next week, Wes Matthews, Marvin Williams and others, have laid out themselves for seemingly inconsequential possessions. Antetokounmpo set the bar that first scrimmage, and the Bucks have cleared it.

Over in the Dallas Mavericks’ camp, the team was reacquainting itself with its top-ranked offense. As an exercise in recall that’s not uncommon in Dallas, head coach Rick Carlisle drew one of the Mavericks’ sets on a whiteboard, and asked the players to identify it by name.

The group included several veteran players, a couple of whom had been in Dallas for a few seasons. But it was Luka Doncic who called out the play, even though the Mavericks hadn’t run it with any regularity since the opening weeks of the season. Only Doncic didn’t use the play’s 2019-20 name, but rather its designated name from the previous season.

“This is the way his computer works,” says Mavericks head coach Rick Carlisle. “He can remember everything from this year and last year. His basketball recall is part of his brilliant basketball mind.”

While Antetokounmpo and Doncic certainly aren’t the only NBA players who will abandon caution in practice to set a tone, or possess computer-like brains that can simulate NBA basketball on a whim, they are extreme outliers in a league of outliers. These qualities are essential ingredients in their respective stardoms, which were on display Saturday night in Orlando, just the third meeting between them.

Doncic’s Mavericks prevailed 136-132 in overtime, but the game revealed a glimpse of a future that seems inevitable: a rivalry that could define the NBA for a generation with parallel career paths, potential Finals showdowns, and a co-branding partnership of sorts that could represent the NBA the world over.

While both came to the NBA as European teenagers, Antetokounmpo and Doncic achieved their superstardom quite differently. Antetokounmpo was a 19-year-old playing in a second-tier Greek league, averaging fewer than 10 points per game. Even on the eve of the NBA draft, only a small handful of NBA teams had seen him play live basketball. By the time Doncic was 17, he was named the ACB’s Player of the Week after putting up 23 points and 11 assists for one of the preeminent professional basketball teams in the world. If Antetokounmpo was a curio, Doncic was the Second Coming.

Despite the contrasting journeys across the Atlantic, both Antetokounmpo and Doncic personify the 21st century NBA superstar: Big, dynamic, multi-skilled playmakers who defy classification by position. (Antetokounmpo’s Basketball Reference page lists him as “Power Forward and Point Guard and Small Forward and Shooting Guard.”). Doncic is a 6-foot-7 point guard who, in addition to being his team’s best passer, is also its most effective post player.

Selected No. 15 overall in the 2013 draft, Antetokounmpo, 25, grew into his body and acquired the skill set to accompany it gradually over several seasons. This process required intensive training, study and preparation. Doncic arrived in the NBA as fully formed as a teenager can, with the vision, intuition and tools more commonly seen in a multiple All-Star.

While Doncic accomplishes more on the perimeter, Antetokounmpo gets more done above the rim. No player in the league pressures defenses — in the open floor, in the paint, in isolation, vertically, horizontally — than Antetokounmpo. Rare is the possession where he, irrespective of defensive scheme or situation, Antetokounmpo isn’t a lethal threat to score at the rim. He’s also the rare NBA player who can control the game on the defensive end of the floor with his overall quickness and anticipation, his capacity to cover ground and erase mistakes, and his knack for making gaps and seams disappear instantly.

With the Bucks having locked down the East’s top seed, Antetokounmpo — likely to win his second consecutive MVP — looked comparatively mortal on Saturday night, taking a good number of his attempts from long range. He scored 34 points in 33 minutes, while collecting 13 rebounds and five blocks. We’ve been marveling at his vision, stride and movements for several seasons, it’s easy to shrug when he corrals a miss and turns the court into a casual slalom course, charging 90 feet with four dribbles and finishing at the rim, as he did early in the third quarter. In no other era would we call this a transition bucket, but Antetokounmpo can ignite a break at will. He can also transform a workaday pick-and-roll possession in the halfcourt into a hammer dunk with one fluid movement off the screen, as he did with George Hill in the opening half. This is the reality of playing with or against Giannis — every ordinary possession can be commandeered into a highlight.

“Giannis is an MVP, he’s a hell of a player-it’s like almost impossible to stop him and we did a great job, especially Maxi, Dodo,” said Doncic. “They were on him. It’s tough to stop him; but we work hard, we trust each other, and just keep going and going.”

Milwaukee’s ascension from middling Eastern Conference team with some promise to a juggernaut with title aspirations can be traced to Antetokounmpo’s ability to perform these exploits and torment defenses nightly. He is not only the NBA’s most dominant player, but its most consistent.

Right from the outset, Saturday night was a bright window into Doncic’s otherworldly talent, with one exquisite stunt after another. First, he came off a double screen and faked a wraparound pass on the drive to breeze past two defenders for a layup and the foul. Soon after, he slung a pinpoint, left-handed pass across his body to Dorian Finney-Smith in the weak-side corner for an open 3-pointer. TIme and again in traffic, he found cutters — Tim Hardaway Jr. on the weak-side baseline, Delon Wright diving from the perimeter while Doncic was trapped under the basket, then Wright again streaking down the lane while Doncic somehow navigated a pass around Antetokounmpo.

By the time it was over, Doncic had unleashed a couple of step-back 3s, orchestrated a beautiful two-man game with Kristaps Porzingis, and perhaps most jaw-dropping of all, dropped a between-the-legs pass to Max Kleber in traffic for an easy slam and one before polishing off the game with a contested runner in the lane. He finished with 36 points, 14 rebounds and 19 assists (a career-high), with only two turnovers.

“He’s one of the most talented guys I’ve ever played against,” Antetokpounmpo said after the game. “He’s making the whole team better, and he’s going to keep getting better.”

Dallas’ roster is not exactly a catalog of shot creation, yet the Mavericks boast the NBA’s top-ranked offense — that’s the work of a 21-year-old basketball savant.

The appeal of the transcendent NBA superstar whose fame extends beyond the basketball world resides in more than just a collection of superlatives and go-to moves. Over the past 40 years, those who have reigned as the “face of the league” have been engaged in a large-scale branding exercise that’s both commercial and narrative. Magic and Larry resuscitated the league with a sharp rivalry; Michael translated a new kind of competitive dominance into an unprecedented commercial power; Iverson had a valence that was countercultural; then came Kobe and LeBron, each an expert mythmaker who leveraged his story and success to build a wide-ranging portfolio that consisted of far more than shoes.

While we have a pretty good idea how Antetokounmpo and Doncic will further refine their on-court games to incredible effects, how they’ll carry the mantle of Global NBA Brand is more difficult to envision, at least at present.

In the years since he established himself as one of the league’s top talents, Antetokounmpo has shunned the gloss and attention that envelops shiny new stars. While not nearly as introverted as Tim Duncan, Antetokounmpo has insisted in Duncan-like fashion that teammates be included in any requests for individual coverage. Though he’s genuinely interested in selling shoes, Antetokounmpo’s default setting has remained as a gym rat who divides his time between the Bucks facility and his family, including newborn son Liam. Whether these inclinations are born out of his journey as a Nigerian-Greek immigrant with a strong filial piety, there’s another factor at play, say those who work most closely with Antetokounmpo:

The notion of preening as the face of the NBA before winning a championship is simply incomprehensible to Antetokounmpo.

Once he has led his teammates to a title, there’s an expectation that his broad smile and genial personality will reveal itself to the global masses. While the party will rarely if ever be at Giannis’ house, and he’s unlikely to be a Banana Boat league socialite, he will more readily introduce himself to the world.

Still only 21, Doncic shares some commonalities with Antetokounmpo, though he’s more naturally gregarious. Doncic’s brand of stardom is likely to be less about the commercial (though he is a committed sneakerhead) or off-court visibility. What drives Doncic toward stardom, say those in Dallas, is his insatiable love of basketball theatrics. When Doncic thinks about stardom, he doesn’t imagine a signature shoe or holding court surrounded by NBA peers. It’s strictly about hitting the biggest shot with the most dramatic flair. It will be about the showmanship on the floor, not the salesmanship off it.

Selling Antetokounmpo and Doncic as its headliners is a fitting outcome for a league whose global ambition has been a defining characteristic. The spectacle of their games is perfectly suited to the digital age, where snippets can be consumed and shared in a flash. They bring a stage presence that’s as essential as it is electrifying in a world where there is more competition than ever for the attention of viewers.

The extent to which that is enough for a Giannis-Luka NBA to mesmerize the world will depend on the depth, drama and fire of that rivalry.