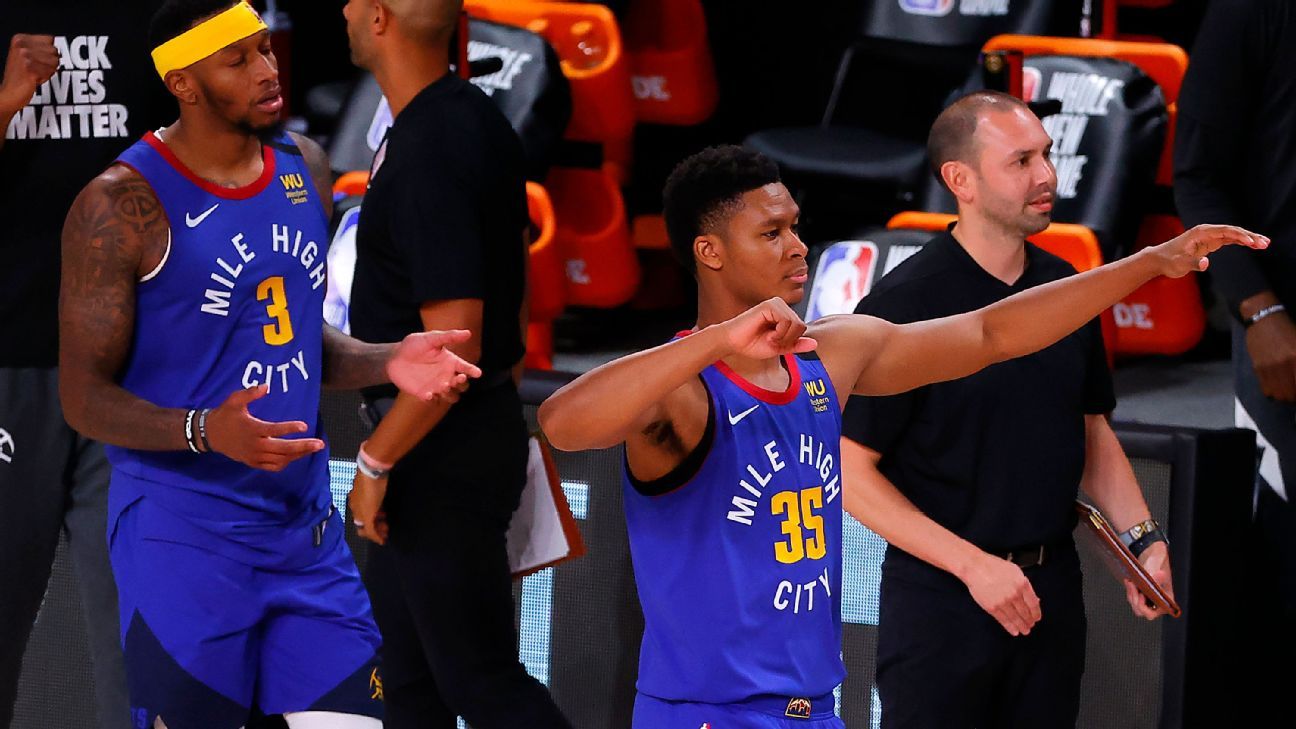 LAKE BUENA VISTA, Fla. — The first double-overtime game inside the NBA’s bubble at the Walt Disney World Resort, a thrilling 134-132 victory for the Denver Nuggets over the Utah Jazz, was overshadowed by a pair of clock operation malfunctions at the end of the first overtime period.

The first came with 3.4 seconds remaining, after Jazz star Donovan Mitchell had hit a jumper to make it 119-117 Utah. Following a Denver timeout, star center Nikola Jokic took the inbounds pass, dribbled to the hoop and scored.

There was only one problem: the clock never started.

The officials then reviewed the play, and after reviewing how long it took with a digital shot clock, determined that the play had taken 3.1 seconds — meaning that Jokic’s shot counted, and that Utah would get the ball back with 0.3 seconds to go.

This time, however, the problem wasn’t that the clock didn’t start — but, rather, that it was started too quickly.

When Joe Ingles inbounded the ball, the clock began before anyone touched it. That meant that Utah got a second chance to win the game, but Jordan Clarkson‘s heave at the buzzer missed long, and the game shifted to a second overtime.

For his part, Jokic said he wasn’t worried about his shot not counting.

“I thought it must count because everybody played,” Jokic said. “Just because somebody didn’t put the time on … you could just calculate the difference. So I was feeling OK [about it].”

Mitchell blamed himself for leaving time on the clock for the Nuggets to score at the end of the first overtime.

“That’s really the only reason that I’m upset, because I should know that. I should know how to attack around four or three [seconds remaining],” Mitchell said. “That’s a mental error on my part.

“I feel like if I do that and hit the same shot, they don’t have an opportunity [to tie the score]. So that’s on me. I definitely had that mental error, but at the end of the day, it’s a learning process and I’m glad we’re learning it now and not Game 4 or 5 in the playoffs.”

Eventually, Denver — with Jamal Murray back on the court for the first time inside the bubble after sitting out with a hamstring injury — was able to prevail behind Jokic’s monster effort of 30 points, 11 rebounds and seven assists in 42 minutes. Jokic’s performance included going right at Utah Jazz star Rudy Gobert, the two-time reigning Defensive Player of the Year, multiple times late in regulation and overtime and having success, including fouling Gobert out of the game late in the first overtime.

The game only made it to overtime at all because of some ridiculous heroics by Mitchell, who scored seven points in the final 10.8 seconds to allow the Jazz to erase a six-point deficit and set up some free basketball.

Mitchell hit two free throws and then, after Michael Porter Jr. lost the ball out of bounds, hit a 3-pointer out of a timeout to cut Denver’s lead to one. After Nuggets forward Jerami Grant split a pair of free throws, Mitchell — who finished with 35 points, six rebounds and eight assists — went coast-to-coast layup and, after snaking through Denver’s defense, found a clean path to the rim and laid the ball in to send the game to overtime.

In the second overtime, Denver managed to pull away thanks to Murray, who finished with 23 points, 12 rebounds and eight assists, who scored five straight points to give Denver the lead for good. Utah was hurt by the absence of Gobert, who had 22 points and 13 rebounds in 41 minutes before fouling out.

The Jazz still had one final opportunity to escape with a win after Murray missed a pair of free throws with 4.2 seconds remaining, but Mitchell’s heave from halfcourt fell short, and the Nuggets escaped from a game they once trailed by as many as 18 points with a win.

Jazz coach Quin Snyder didn’t give a direct answer when asked about how the clock malfunctions were handled, particularly the one on the Jokic bucket.

“It’s hard to point to any one thing,” Snyder said. “The refs have their job to do, and we have our job to do.”

With the win, Denver is now two full games ahead of Houston for third place in the West. Utah, on the other hand, is percentage points ahead of the Oklahoma City Thunder for fifth place — setting up the very real possibility that these two teams will meet in the first round of the playoffs when they begin on Aug. 17.

Information from ESPN’s Tim MacMahon was used in this report.