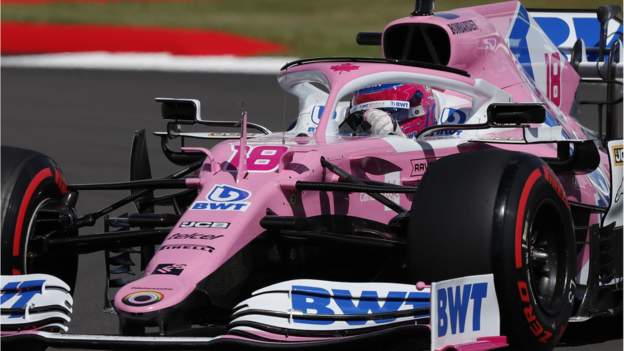 Five teams – half the grid – have said they intend to appeal against the decision to punish Racing Point for illegally copying Mercedes parts.

However, the verdict allows them to continue running those parts.

The five teams are Racing Point, Renault – who lodged the initial protest after Friday’s decision – Ferrari, McLaren and Williams.

Protesting against the verdict allows wider issues – in particular the philosophical question of how much copying of a rival team’s design is permissible – to be dealt with in front of a panel of lawyers at the FIA Court of Appeal.

The decision found Racing Point guilty of using an effective copy of Mercedes’ 2019 rear brake ducts on their 2020 car, which is forbidden by Formula 1 regulations.

The information regarding these parts had been supplied legally by Mercedes in 2019, but a change of regulations before the 2020 season made brake ducts a part of the car that teams have to design themselves.

Despite the ruling saying the parts had been designed illegally, were run illegally at the first four races, and would continue to be in contravention of the regulations if they remained on the car, Racing Point have been allowed to carry on using them.

Stewards said this was because the verdict was considered to be an appropriate punishment for the breach, and as a result of problems caused by asking Racing Point to redesign parts given the knowledge they already have.

But rival teams are also concerned about the wider issue that the entire car is a virtual copy of the 2019 Mercedes.

Racing Point say they achieved this by taking photographs of the Mercedes and designing their car from them, a claim treated with scepticism by their rivals, who argue that if this was possible to this extent, other teams would have done it before.

Ferrari team principal Mattia Binotto, speaking before Ferrari made their intentions clear, said: “One thing that is important is that it has somehow been clarified that there has been a breach of regulation. That is the starting point.

“But the two things need to be split. On the braking duct there is a breach of regulation – that is a fact and it has been clarified. Is the penalty sufficient or not?”

McLaren Racing chief executive officer Zak Brown said: “My initial reactions are that Racing Point has been found guilty and I am concerned that they still have those… what were deemed illegal in Austria on the race car now.

“That is confusing for the fans, how something that is not legal in Austria is still on the car.

“This is, potentially, the top of the iceberg, the starting point of looking at what’s happened here, because I don’t think it’s healthy for the sport.”

Renault F1 team boss Cyril Abiteboul said: “We need to recognise that what Racing Point has done, based on a car that has such an advantage, against anyone else on the grid, has been a shock in the system, has been a disruption. We need to see how we deal with it.”

Mercedes team principal Toto Wolff said: “The verdict that came out today is extremely complicated. It comes up with an interpretation that is new – new to all of us. We have provided certain data in 2019, which was totally within the rules.

“I don’t think the brake ducts are the reason that they suddenly compete for the first six positions. I think it’s a splendid engineering team there that has extracted the most from the regulations. I think we can have the debate of ‘do we want this going forward?’ in terms of having copies of whole cars.”