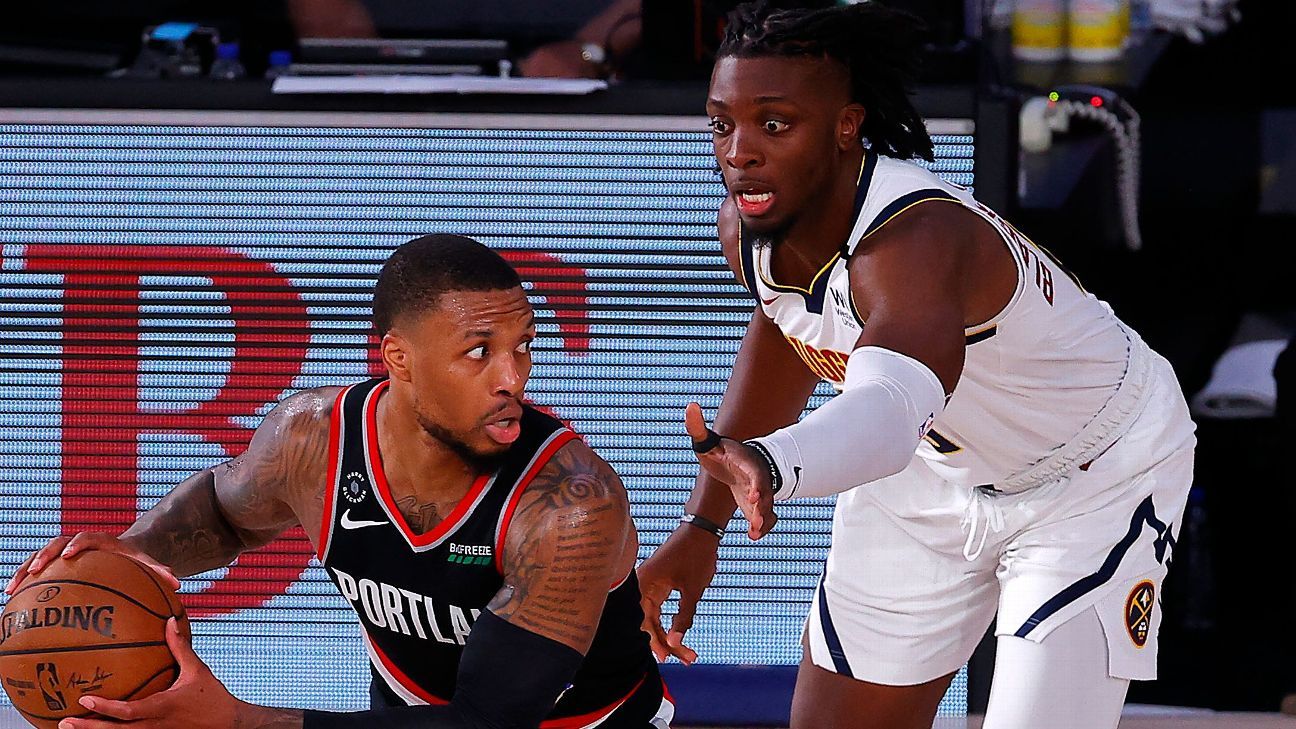 After a career game on Thursday against the Denver Nuggets, Portland Trail Blazers reserve wing Gary Trent Jr. sat on a stool a day later in front of a widescreen TV doing his media Zoom, talking about his development, his improvement, his progression, his confidence. It was an extended media session for Trent, and eventually, Damian Lillard started growing impatient.

Trent turned and laughed, and as the question came in, Lillard’s tattooed right arm sidled into view on the edge of the screen. Trent gave a short answer, which merited a quick follow-up, and now Lillard leaned in and pointed at the camera.

“Last question,” he said. “The bus is waiting for me.”

Trent hopped up and Lillard sat down, ready to go. He wasn’t wasting any time. Which has been his mentality with everything in the NBA’s Florida restart.

Portland’s focus from the beginning of training camp was to hit the ground running. Players said it in every media availability, particularly Lillard. No easing into it, figuring things out, feeling their way through the oddities of empty gyms and awkward accommodations. Once the games started, it was go time.

Lillard had his best seeding game against the Nuggets, a 45-point masterpiece that featured 11 3-pointers, tied for a career high. It was quintessential Lillard: everything in balance, in rhythm and in range. Pull-ups from 35-plus feet dragged defenders to pickup points by midcourt, opening the floor for him to drive and kick, and for teammates to find opportunities.

Portland got results from the jump, going 3-1 to not only hold on to the 9-seed in the Western Conference playoff picture but threaten Memphis for the 8. Lillard had to grind early, averaging 26.6 points in the first three games but on just 39% shooting from the field and 30% from 3. He said the ball felt like it was coming off his hand just right and that it should’ve been going in more. It just wasn’t. That never fazes Lillard.

This is what Lillard can do — and really, consistently does. He’s as unstoppable an offensive player as anyone in the league, stretching defenses to their absolute limits while toeing the appropriate line between gunner and general.

The effortless long-distance scoring drops jaws and raises brows, but with a healthy group around him featuring more weapons, Lillard is averaging 11.3 assists. Center Jusuf Nurkic has rediscovered his pick-and-roll chemistry with Lillard immediately, power forward Zach Collins is protecting the rim, and small forward Carmelo Anthony is back in his old position, spotting up and providing complementary scoring.

“I feel like we might’ve been in the Finals last year if we had him,” Lillard said of Anthony. “Just another person out there that when we’re getting trapped and double-teamed that they have to account for and respect, but it is what it is.”

Lillard acknowledged Thursday that this Trail Blazers team can’t lean on being the team that was in the Western Conference finals last season, because with a subpar season — the context of injuries included — they haven’t earned it on the floor.

But they are healthy now. They’re deeper. And with Lillard, as the saying goes, he’s in range the minute he steps into the gym. Which, right now, with a push toward the playoffs and a dangerous look about them for whoever draws them, so are the Trail Blazers. — Royce Young

Here’s the latest on the standings, the games to watch Saturday and Sunday, and everything you need to know. Check back for highlights and updates throughout the day.

No Kawhi for Clippers on Saturday

LA Clippers forward Kawhi Leonard is sitting out Saturday’s game against the Portland Trail Blazers due to knee soreness. Leonard has missed 13 games this season prior to Saturday, but had played in all four of LA’s seeding games. The Clippers are on a back-to-back, as they’re slated to take on the Brooklyn Nets Sunday night. Full story »

After losing to the Phoenix Suns on Tuesday, the Clippers got back on track by beating the Dallas Mavericks — their likely quarterfinals opponent — on Thursday behind 29 points from Kawhi Leonard. Portland, meanwhile, will be looking to knock off yet another surefire playoff team in the West after beating the Houston Rockets on Tuesday and the Denver Nuggets on Thursday. The Trail Blazers continue their push for the eighth seed in the Western Conference. — Tim Bontemps

Denver will be hoping to get closer to full strength, as the Nuggets have played each of their first four games — which they split — with starters Jamal Murray, Gary Harris and Will Barton all sitting out because of injuries. Harris and Barton are still out, while Murray is questionable. Utah, on the other hand, will be playing the second half of a back-to-back set after it opened Friday’s slate of games with a loss to the San Antonio Spurs. — Bontemps

The Eastern Conference playoff teams are set and there will be no East play-in game next weekend after the Washington Wizards were officially eliminated Friday.

In the Western Conference, only two games Saturday involve bubble teams. The Sacramento Kings don’t play, but they will be the next team eliminated if the Portland Trail Blazers can defeat the LA Clippers. And the Phoenix Suns, the last team without a loss in Florida, will look to keep the positive vibes going against the Miami Heat.

It was a first for both teams on Friday in the bubble — Memphis picked up its first win, while Toronto was dealt its first loss. The Grizzlies earned a much-needed victory over Oklahoma City to hold on to eighth place in the Western Conference playoff race. On the other hand, the Raptors dropped their first game to Boston in their largest loss of the season.

Because of the quirks with seeding-game scheduling and the end of the regular season, this is the only meeting between Memphis and Toronto this season. Both teams will be wearing their classic uniforms for this game: Toronto in its original dino jerseys and Memphis with its teal Vancouver jerseys. — Andrew Lopez

These two teams have met only once this season: Zion Williamson‘s debut on Jan. 22. Despite Williamson’s 17-point outburst in a 3-minute, 8-second stretch in the fourth quarter, San Antonio held on for a 121-117 victory. Originally, the teams were set to play three times over the final 14 games, including the regular-season finale. Instead, this is their only matchup on the NBA campus.

San Antonio is making a push for a playoff spot, while the Pelicans are just happy to be in the race after dropping three of their first four games in Florida. Williamson, who did not play against the Wizards on Friday on the second night of a back-to-back set, is expected to be available against San Antonio.

Without guard Ben Simmons on Friday, Philadelphia seemingly sleepwalked through three quarters against Orlando before pulling away for a victory in the fourth quarter against a Magic squad that was missing Aaron Gordon (hamstring) and Jonathan Isaac (ACL). Philadelphia has been up and down in the bubble despite coming away with a 3-1 record — picking up a win over San Antonio despite a furious Spurs comeback, a single-digit win over Washington and then the victory over Orlando.

Meanwhile, the Trail Blazers are continuing their push to make the playoffs and turn up the pressure on the Grizzlies for the eighth seed. Portland will be playing the second game of a back-to-back. At the very least, Portland is putting itself in the right spot for the inevitable play-in tournament in the West.

New NBA playoff predictions: Who grabs the 8-seed to play the Lakers?

The Blazers’ surge has changed the West play-in race. Here are the latest projections.

Will Luka Doncic make magic in the NBA playoffs?

The NBA playoffs won’t be the first postseason of Doncic’s pro career. Does that mean he’ll be ready to roll?