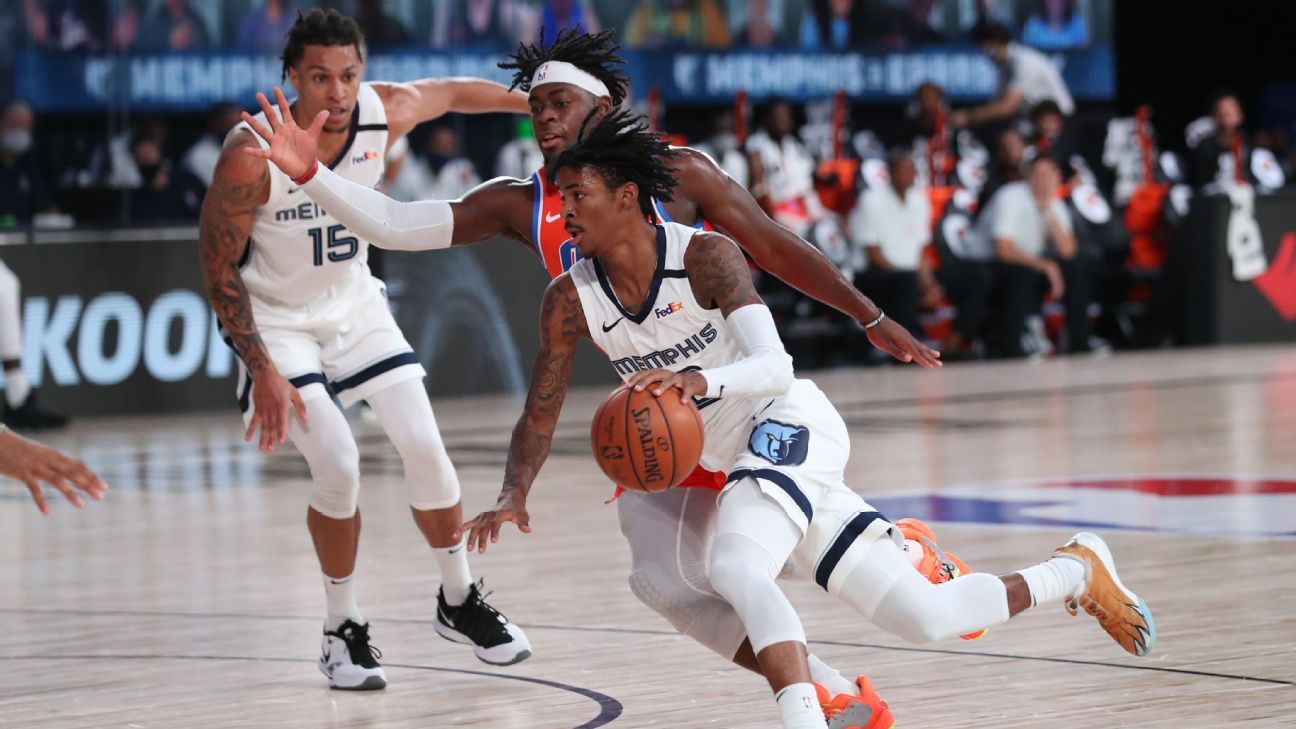 LAKE BUENA VISTA, Fla. — With his team off to an 0-4 start in the NBA bubble and his daughter, Kaari Jaidyn, celebrating her first birthday hundreds of miles away, Memphis Grizzlies rookie standout Ja Morant called his parents with an admission Friday morning.

“I wasn’t in a good mood at all,” Morant said following a 121-92 comeback win over the Oklahoma City Thunder on Friday. “[I] told them it was probably one of the toughest days of my life.”

The win, coming after Memphis trailed the sixth-seeded Thunder by 18 points, breathed life into the Grizzlies’ pursuit of the No. 8 spot in the Western Conference playoff picture — and lifted Morant’s spirits. “Kind of tough but the thing I gave her today was a win,” Morant said after putting up 19 points and 9 assists to Chris Paul’s 17 and 5. “So hopefully she’s thankful for that and all the gifts she’s got back at the house.”

The irony of gifting a victory, of course, is the win increases the likelihood that Kaari will have to wait a bit longer before her dad returns from Orlando. Memphis (33-37) now leads the Portland Trail Blazers (32-38) by one game for the eighth seed with three seeding games remaining for the Grizzlies — a treacherous stretch of the best that the Eastern Conference has to offer in the Toronto Raptors, Boston Celtics and Milwaukee Bucks.

While the Grizzlies and Blazers split their two regular-season matchups — including a 140-135 overtime win by Portland in the seeding games — they cannot tie for eighth. Portland will end up playing 74 games and Memphis will finish with 73 as a result of the timing of the NBA hiatus and where each team was in its schedule at that point. Whichever team finishes No. 8 will have to participate in a mini play-in tournament with whichever team is No. 9 in order to earn a first-round berth against the Los Angeles Lakers, who clinched No. 1 in the West earlier this week.

Morant said that even when the Thunder were leading 37-19 in the first quarter, his team kept its confidence. “I don’t think as a whole we never doubted ourselves, doubted what we can accomplish as a team,” he said. “I feel like we all were very confident in our team and I feel like tonight we went out and played freely.”

Memphis coach Taylor Jenkins adjusted his starting lineup, playing Anthony Tolliver with the first unit and bringing Brandon Clarke off the bench. “It was great, the energy on the floor,” Jenkins said. “You could see the energy on the bench. Naturally happens when you’re winning but we just got to harness that again.”

The Grizzlies put five other players in double-digit scoring besides Morant — including Clarke, who went 6-for-6 off the bench — and were led by Dillon Brooks‘ 22 points. The players left the court at VISA Athletic Center barking like dogs, soaking in their first win since the NBA restart.

Morant, who’s still considered a young pup in the league, says a dog happens to be the animal he emulates on the court. After taking a hard foul on his hip from the Thunder’s Darius Bazley late in the first half, the presumptive Rookie of the Year winner stayed in the game to shoot his free throws and then closed things out after halftime. “I’m good,” Morant said. “I’m a dog. A warrior. I’m fine.”