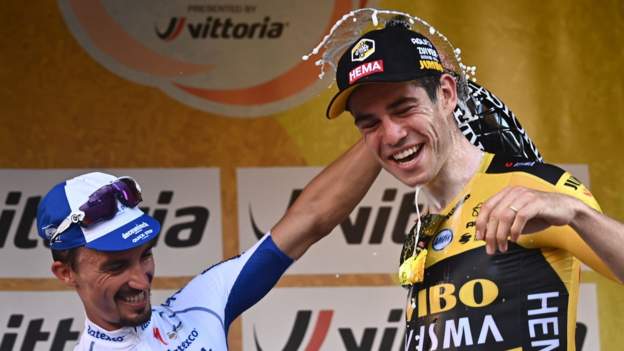 Frenchman Alaphilippe attacked to lead the race solo over the final climb with 5.5km to go but Van Aert reeled him in on the descent.

They held off the chasers into San Remo, with Alaphilippe kicking for the line first, but Van Aert powered home.

Australia’s Michael Matthews took the sprint from behind to finish third.

It is a second win in as many weeks for Jumbo-Visma rider Van Aert, 25, following victory in Strade-Bianche, the first World Tour race held after the season was delayed by the coronavius pandemic.

This is his first victory in a ‘monument’ classic – cycling’s five oldest and most prestigious one-day races.

“I don’t have words actually – I know everyone says that when they win a monument but to start the second part of the season like this, it’s crazy.”

The race was scheduled to be held on 21 March but was postponed because of the pandemic, with the 305km route also changed to run more inland after coastal towns opted against closing their roads in favour of keeping them open for tourists.

The course did still contain the traditional final two climbs of the Cipressa and the Poggio, with Bora-Hansgrohe’s Daniel Oss going clear on the former before he was caught.

Gianluca Brambilla and Aime de Gendt then attacked on the Poggio, with the latter briefly going solo, before Deceuninck-Quick-Step’s Alaphalippe and then Van Aert came past to contest the finish.

Froome, who will join Israel Start-Up Nation at the end of the season, finished nearly 10 minutes behind race winner Bernal at last week’s Route d’Occitanie.

Britain’s four-time Tour winner Froome, 35, risks not being selected for this year’s race, which starts on 29 August, if his form is not deemed strong enough.

The third and final stage of the Tour de l’Ain takes place on Sunday.