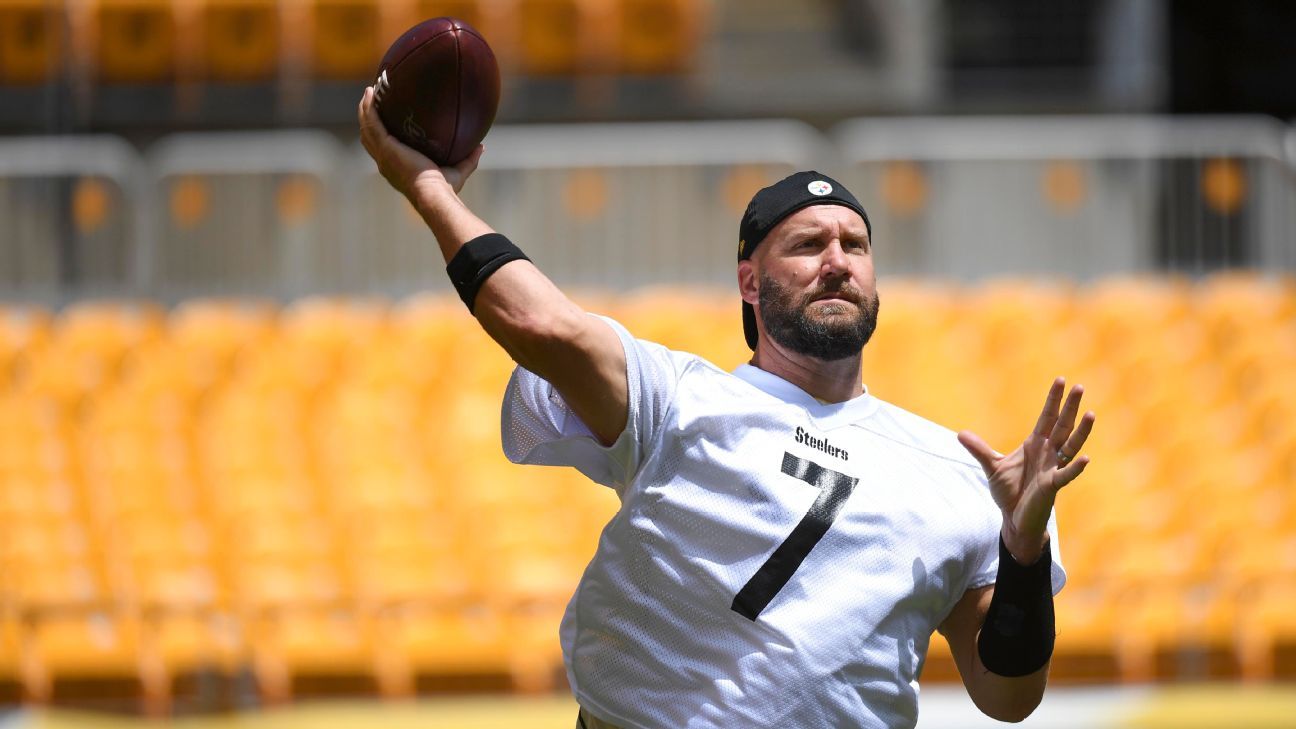 PITTSBURGH — Ben Roethlisberger grinned and laughed as the reporter listed off elements of the Pittsburgh Steelers that should put them in contention for a title this season.

An elite defense. A veteran, All-Pro line. Playmakers all over the place. A franchise quarterback.

And yet, as the reporter noted, the Steelers are still considered long shots to win not only the Super Bowl, but their division, too.

Being an underdog isn’t something Roethlisberger has experienced often in his career, but it’s a role he’s looking forward to playing as he returns from season-ending elbow surgery that reattached three flexor tendons in his elbow nearly a year ago.

“[As] you were naming things, I was just going to say we just need a quarterback now, but you know, I think it’s fun,” Roethlisberger said with a chuckle. “I know a lot of guys like being on top and being hunted. Sometimes it’s fun to be the underdog and to be overlooked.”

Bet on those numbers to drive Roethlisberger.

“Ben coming back from a year where he got hurt and having people question him whether he can return at his age will definitely drive someone to feel like they are an underdog,” Steelers linebacker Vince Williams said. “But Ben is Ben Roethlisberger. If he is on the field and he is playing and he is healthy, he is a top quarterback in this league. So I don’t think there is any undermining what he is going to bring to the game when he is healthy.”

Roethlisberger returns to a division full of up-and-coming quarterbacks with a Heisman on their resumes (the Ravens’ Lamar Jackson, the Browns’ Baker Mayfield and the Bengals’ Joe Burrow). He’s older than the other three by an average of 14 years, but the season away from playing football reinvigorated Roethlisberger.

He entered last season with an emphasis on being a better leader as the Steelers ushered in a new era without running back Le’Veon Bell and wide receiver Antonio Brown. Being on the sideline — while not how he would prefer to spend the season — may help him continue to evolve as a leader. Roethlisberger got a different feel for the offense as he watched how players communicated with each other and how coaches interacted with their players between drives.

“I was able to watch more of the big picture, if you will,” Roethlisberger said. “Then I was able to speak with more guys on the sidelines and talk with them and communicate kind of what I saw, what did they see. I think it was beneficial.”

He’s only thrown at practice for two days, but his teammates can tell a difference in Roethlisberger.

“He’s different this year from what I’ve seen last year,” second-year receiver Diontae Johnson said. “He’s more excited. He’s, like, anxious to get on the field and wants to play with us. That makes you want to play for him even more.

&• List of NFL players who are opting out
&• Could players wear masks during season?
&• Football historians discuss 1918 pandemic
&• No bubble for NFL play? Why league said no
&• Calendar: Coronavirus-impacted schedules

“That’s one of the things I’ve been seeing from him — him engaging with me more than he did last year because I was a rookie. He wasn’t talking to me like that. Now, just being able to talk to him and have that connection, it’s just going to keep building. I’m trying to help him win a championship.”

Roethlisberger also returns to a team with a defense built to support him and terrorize division quarterbacks. The Steelers return 10 starters from last year’s stout defense, including defensive end Stephon Tuitt, who missed half of the season with a torn pectoral muscle.

“We do have a great defense, and I’m excited about that group,” Roethlisberger said. “That was one of the big reasons I was excited to come back was to play with a group like that. They let you play more free as a quarterback. I’m excited about that part of it and, obviously, our linemen and all of our skill guys we have.

“It’s OK. We can be overlooked. It’s the offseason, and no one knows what the season is going to hold or entail. We are going to go out there and give it everything we have to try and win a football game.”