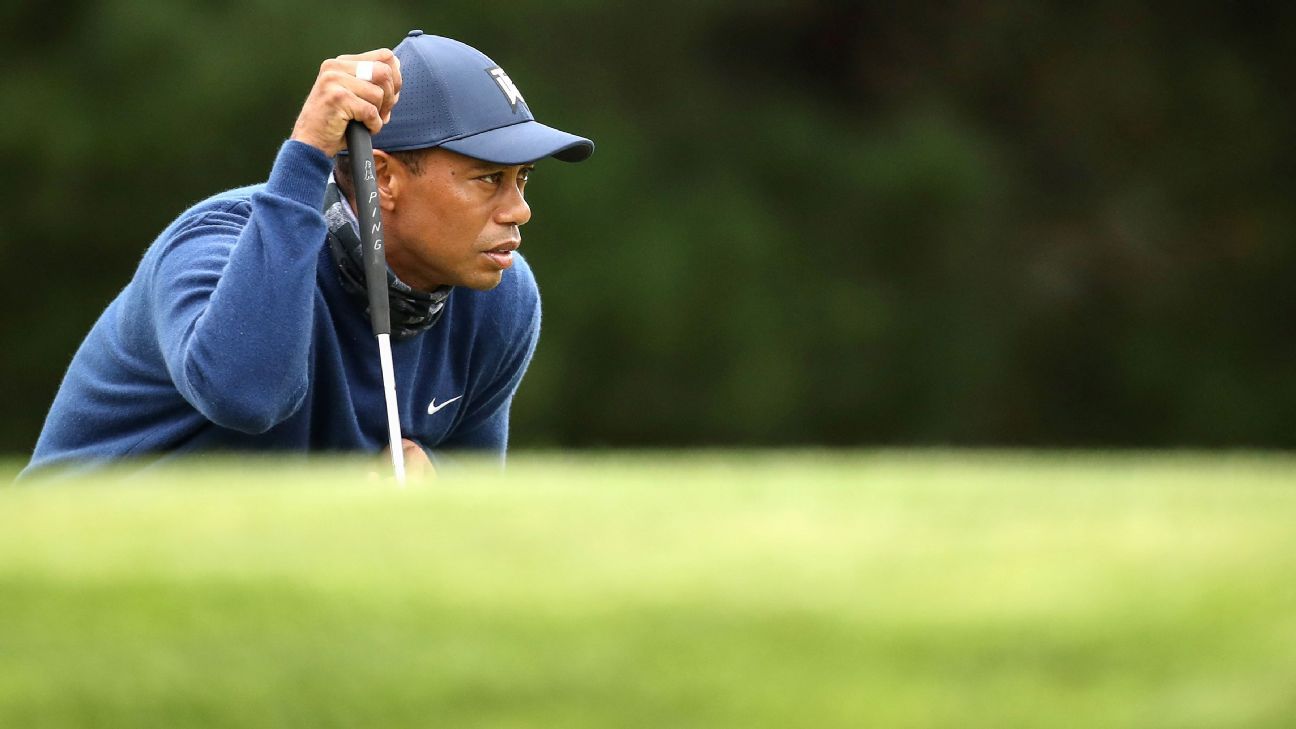 As he has aged, Tiger Woods has built a bridge to the crowds he spent most of his prime ignoring. The galleries always loved him, and Woods decided in his latest act that he would finally love them back.

He was never going to be Arnold Palmer, who made sure every fan in the house felt a part of his experience. But after thinking he was finished as a competitive golfer a few years ago, a more vulnerable Woods connected with his adoring crowds and nearly won two majors in 2018, won that fall’s Tour Championship, then won the 2019 Masters.

But this week, as a consequence of the coronavirus pandemic, fans are not allowed on the grounds of the PGA Championship in San Francisco, where the 44-year-old Woods, who arrived at the TPC-Harding Park course wearing a face covering, will have to go it alone. On the 10th tee, making his back-nine start at 8:33 a.m. PT, Tiger was in the middle of his practice swings when the announcer asked nobody in particular to “please welcome the 1999, 2000, 2006 and 2007 PGA champion from Jupiter, Florida, Tiger Woods.”

“And then there’s nothing,” another member of his group, Rory McIlroy, said after their round.

One of the world’s most famous men was greeted by a deafening silence.

“Our new norm,” Woods would call it. And his new opportunity to add to a legacy that requires no additions.

Woods had not played tournament golf in 167 of the 171 days that had passed since he placed 68th at the Genesis Invitational in February. Entering Thursday, he had shot 76 or 77 in four of his last eight PGA Tour rounds. His surgically-altered back tightened up at the Memorial three weeks ago, inspiring concerns that the relatively cool weather would make Woods feel his age and then some. And still he shot a 2-under 68 in the first round to beat McIlroy by two strokes and Justin Thomas by three in the day’s marquee group.

He missed too many fairways to climb higher on the leaderboard, yet made enough putts to give himself a chance over the next three days to show that as much as he now appreciates his fans, he doesn’t need them to win his 16th major title.

When he was younger, Woods played as if he were all alone — much like a young Jack Nicklaus. There was precious little eye contact with the crowd, and Woods usually marched from the practice area to the first tee to the green with a look that suggested one should approach at one’s own peril.

So many things changed Woods over time — fatherhood, the infidelity scandal, divorce, the endless series of back surgeries, the DUI arrest. This comeback, made possible by his Hail Mary fusion surgery, culminated in last year’s lovefest at Augusta National, where his caddie, Joe LaCava, sat in the parking lot after Tiger’s indelible triumph and explained the best part of the whole thing.

“He’s high-fiving people, he’s talking to people, he’s signing autographs,” LaCava said then. “He’s much more fan-friendly, which I think is awesome. He’s great with the kids, talking to guys in groups more…and everybody out there is pulling for him.”

Woods has used that positive vibe to his distinct advantage. In fact, given his physical limitations, it seemed plausible that he couldn’t win without it.

Not long ago Woods couldn’t stand, walk, or sit without experiencing intense pain. He could barely get out of bed, and he had no golf swing to speak of. Even after his return, he’s protected his body at all costs, almost always choosing rest over reps. When Woods explained his switch to the longer Scotty Cameron putter for this PGA Championship, it wasn’t surprising to hear him talk like an 80-year-old dentist at your local club. “You know, it’s difficult for me to bend over at times,” Woods said.

Sounds like a contender who can’t afford to lose one of the most important clubs in his bag, fan support. Yet Woods answered the silence on the 10th tee with his first of five birdies, and then made a putt from downtown on the 13th that inspired polite applause from a good four or five people.

Woods fell back to even par on his second nine before engaging McIlroy in a conversation on the fourth tee box that was caught on a live mic. Amid a fun back-and-forth about rivalries (Tiger, a Dodgers fan, declared his hatred for the Giants), McIlroy brought up the Raiders’ move to Las Vegas and complimented the team’s new stadium to Woods, a longtime fan. Woods wondered about the fate of the season: “If you have football. If, if … Once one person has (the virus) in the locker room, they’re all going to get it.” When McIlroy noted that major league baseball was hanging in there despite its early COVID-19 outbreaks, Woods said, “For now. If they have one more outbreak on any team, they’re done.”

Though he likely wasn’t thrilled when he heard this conversation was picked up on ESPN+, Woods also likely handled it a lot better than he would have in his prime. Hey, there’s a reason why he cherished his two years at Stanford, 30 miles down the road from Harding Park. Woods said the other day he was energized by “being around so many intellectually curious people and unbelievable athletes” in college. As it turned out, those peers afforded him the kind of cover he never got anywhere else. “I’m not a celebrity at Stanford,” Tiger said during his days as a student. “That’s why I love the place.”

But now, with virtually nobody at Harding Park to cheer for him, can he finish first again on the same public muni where he beat John Daly in 2005 and dominated for the U.S. at the Presidents Cup in 2009?

“Of course,” Woods said the other day. A victory would make him the most prolific winner in PGA Tour history, and leave him as the only man to claim major titles in four decades.

It would also prove that an older and more relatable Tiger Woods doesn’t need fans in the gallery to make more memories for those watching at home.